Only Mass Mobilization Can Save the EPA 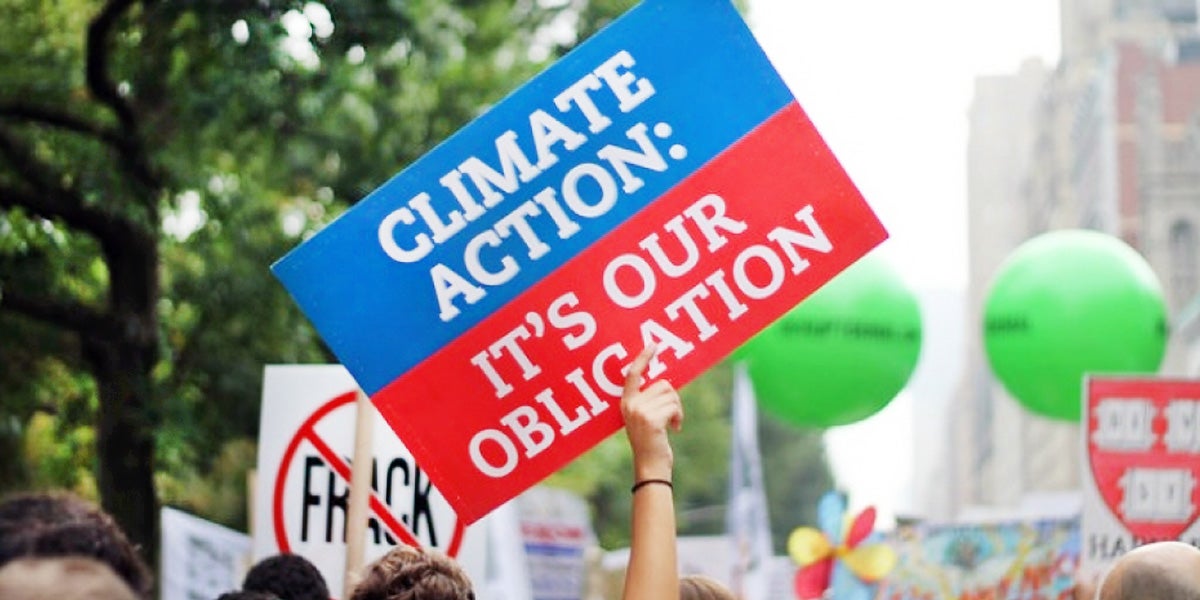 The People's Climate Mobilization on April 29 is a huge chance to show that we won't let our climate and communities be sacrificed. Photo credit: Elizabeth Stilwell / Flickr

It’s not yet halfway through Trump’s first 100 days in office and his administration has already shown they’ll go to any length to dismantle the laws and regulations that protect our air, water and climate.

Trump’s team has already started to dismantle some of the nation’s most important environmental laws, from the Waters of the United States rule that keeps our rivers and streams free from pollutants, to regulations intended to prevent dangerous methane emissions from fracking, an already dangerous and controversial practice.

'We'll Rise as One and Resist' Trump's Attack on People and Planet https://t.co/IsKKzEkcaX @NeverTrumpPAC @TrumpContra

Now, reports in the New York Times and elsewhere that Trump and his denier cabinet are going to start dismantling the the Corporate Average Fuel Economy standards that limit pollution from cars and trucks, rules that save consumers trillions of dollars by getting automakers to produce more fuel efficient vehicles. Also on the chopping block is the Clean Power Plan, the Obama administration’s rules cutting back on carbon emissions from coal fired power plants.

We already know that we won’t be able to count on Congress to intervene. The GOP didn’t bat an eye in approving climate change denier Scott Pruitt as head of the U.S. Environmental Protection Agency (EPA), an agency he’d sued numerous times. Revelations that Pruitt worked directly with industry to weaken environmental laws only seemed to encourage Republicans to vote for him. They saw him as one of their own: a fossil fuel industry shill, ready to put profits over public health each and every time.

That means that it’s up to all of us. The American people still overwhelmingly support laws to protect our air, water and climate. Recent polling shows that even Trump voters support rules to put a price on carbon pollution. And why not? Climate change won’t just impact blue states and leave red states alone. From sea level rise in Louisiana to increased drought in Utah, conservative areas are also beginning to feel the impacts of climate change.

Public opinion is on our side, but the politics are steeply against us. That means that our primary job isn’t to convince people to “care” about what’s happening, they do. It’s to mobilize the millions upon millions of Americans who are deeply concerned and want to do something about it. We need to remind people (and ourselves) that there are clear and powerful ways to make our voices heard, to push back on Trump’s agenda and to hold our representatives accountable.

One of those ways is by taking part in the People’s Climate Mobilization this April 29. Marches and rallies are already being organized across the country and in Washington, DC. We’re going to show Trump that he can try and deny the reality of the climate crisis, but he can’t deny the power of the American people. Together, we’re going to stand up to this administration’s attacks on our climate and communities and put forward the vision of a clean energy economy that works for all.

We know that the real opportunity to create a better economy isn’t by stripping away environmental regulations, but by investing in the transition to 100 percent renewable energy. We also know it’s often low-income workers and people of color who get hit the hardest when we roll back environmental protections and that those same communities would benefit most from a new, clean energy economy.

'Keep Your Tiny Hands Off Our Data' https://t.co/GzeV7RW8cA @ScienceNewsOrg @sciam

With a week of action kicking off with the Science March on April 22, the People’s Climate Mobilization will be a powerful way to help defend the EPA and continue to demonstrate that the public cares deeply about climate, jobs and justice. Trump and the GOP can only continue to get away with their radical, anti-climate agenda if we stay silent. Sustained public outcry is our best shot at beginning to reign in the worst excesses of this administration and force other politicians at the local, state and national level to stand up and fight back.

The EPA, the Clean Water Act, the Clean Air Act and the National Environmental Protection Act weren’t put into place because their was some hippy environmentalist in the White House, but by none other than Richard Nixon, who couldn’t have given a damn about the environment. The only reason Nixon took action was because tens of millions of Americans took the streets during the first Earth Day in 1970 and turned that into real political power by sustaining that pressure.

Now, nearly 50 years later, it’s our turn to fight and protect that legacy—the future that depends on it. The People’s Climate Mobilization on April 29 is a huge chance to show that we won’t let our climate and communities be sacrificed so that the fossil fuel industry can have one last hurrah before renewables inevitably take their place. Let’s get to work.

Jamie Henn is the director of communications and strategy for the international climate campaign 350.org. Follow him on Twitter @Agent350.