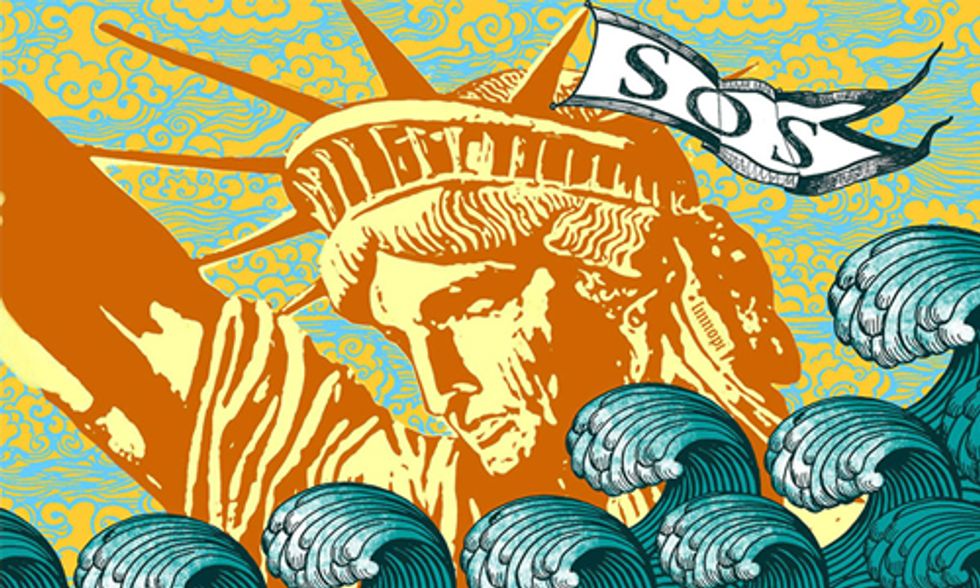 The New York state elections just concluded, and the national midterms are still weeks away, but there is a campaign office in downtown Manhattan that has just gone into overdrive. Volunteers there are hard at work on another deadline: Sept. 21.

"This isn't just about getting a bunch of people to New York to march for an hour then go home," said Michael Brune, executive director of the Sierra Club. "This is about making sure that the tipping point in the fight to halt climate disruption tips in the favor of the average citizen and clean energy prosperity, and that the world's leaders see that the support to do so has reached a level that can no longer be ignored." Poster by Lopi LaRoe

That's the day of the People's Climate March, what promises to be the largest demonstration for action on climate change in world history. The march has brought together more than 1,100 organizations at last count, from the New York City Environmental Justice Alliance to the Georgia Climate Change Coalition. A coalition that's both staggering in size and diversity.

"There's a vast latent constituency of people out there who are alarmed about climate change. But for years, nobody has put up a banner that said 'this is the time, this is the place, to show you care,'" says Ricken Patel, executive director of the 38-million member civic organization, Avaaz. "The People's Climate March is that banner, and we're seeing a phenomenal response to it."

The response should be a wake up call to politicians who still consider climate change a niche issue. For years, climate change felt like a distant threat. Environmentalists, used to stressing out about such things, were incensed. But for the vast majority of the public, fixated on immediate priorities, like finding a job or keeping the kids healthy, a few melting ice bergs just didn't register.

Enter Irene and Sandy from stage left. Cue wildfires, drought and devastating floods. Over the last couple years, it's as if Jerry Bruckheimer was put in charge of producing Mother Nature's special effects. The extreme weather events have become blockbusters: literally. Americans don't need to read a scientific report to understand the threat posed by climate change, they can see it right outside their window.

And as more people have begun to understand the impacts of the climate crisis, they've been connecting it to the daily hardships facing their families and communities. The asthma that keeps your kid home from school? You can look to the very same coal plant that's polluting the atmosphere. The lack of public transit options serving your community? Perhaps the generous subsidies to the fossil fuel industry, and lack of investments in public infrastructure, have something to do with it.

Students on hundreds of campuses, and thousands of youth vote leaders across the country are bringing their power and voices to the People's Climate March to say enough is enough," said Maura Cowley, director of Energy Action Coalition.

"The days when climate change was thought of as a sort of side issue? Those days are over," May Boeve, executive director of 350.org, recently told Capital New York. "The people are united calling for action."

At the forefront of that movement are the low-income, people of color, migrant and indigenous communities that are the hardest hit by climate disasters and the fossil fuel industry.

As Eddie Bautista, the executive director of the New York City Environmental Justice Alliance puts it, "While everybody is impacted by climate change, the impacts are not evenly felt." If you live in a high rise on the Upper East Side, Hurricane Sandy probably freaked you out. But you're probably not still waiting for your home to be rebuilt like many residents in the Rockaways and outlying districts of Queens.

The goal of the People's Climate March isn't to push a single demand or piece of legislation. Frankly, there's too much work that needs to get done to boil it down to one silver-bullet. The goal is to show that public opinion on climate change has reached a tipping point—that there is a loud, organized, and powerful movement of people in this country who are going to force our politicians to take action on this crisis. It's been said time and time again that the one thing that's missing from tackling climate change isn't the policies or technologies, it's the political will. Generating that will is what this march is all about.

"Students on hundreds of campuses, and thousands of youth vote leaders across the country are bringing their power and voices to the People's Climate March to say enough is enough," said Maura Cowley, director of Energy Action Coalition. "We will divest from fossil fuels and build a new clean and just economy, and President Obama and world leaders better be prepared to join us, or face the political consequences."

The march isn't just a flash in the pan. It's the result of years of base building, community organizing, and alliances that are just coming to fruition.

"Labor unions, community organizations--environmental justice, economic justice and faith groups--environmental and climate organizations have been working together more and more over the past several years," says Tomas Garduno, political director of ALIGN: Alliance for a Greater New York, a labor/community alliance. "The breadth and depth of who's working together to organize the People's Climate March is a testament to that."

And the work doesn't end on Sept. 21 in New York City. Throughout the build-up to the march, organizers have set building for the long-term as a key priority. On the People's Climate March website, dozens of online hubs are helping people connect at the local level, as well as via their own interests (the hubs rang from "fracking" to "beekeepers"). Turnout for the march isn't being led by a temporary political operation, but community groups who will continue to work for climate justice in the months and years to come.

"This isn't just about getting a bunch of people to New York to march for an hour then go home," said Michael Brune, executive director of the Sierra Club. "This is about making sure that the tipping point in the fight to halt climate disruption tips in the favor of the average citizen and clean energy prosperity, and that the world's leaders see that the support to do so has reached a level that can no longer be ignored."

Brune is exactly right. As climate change has become impossible to ignore, so has the climate movement.