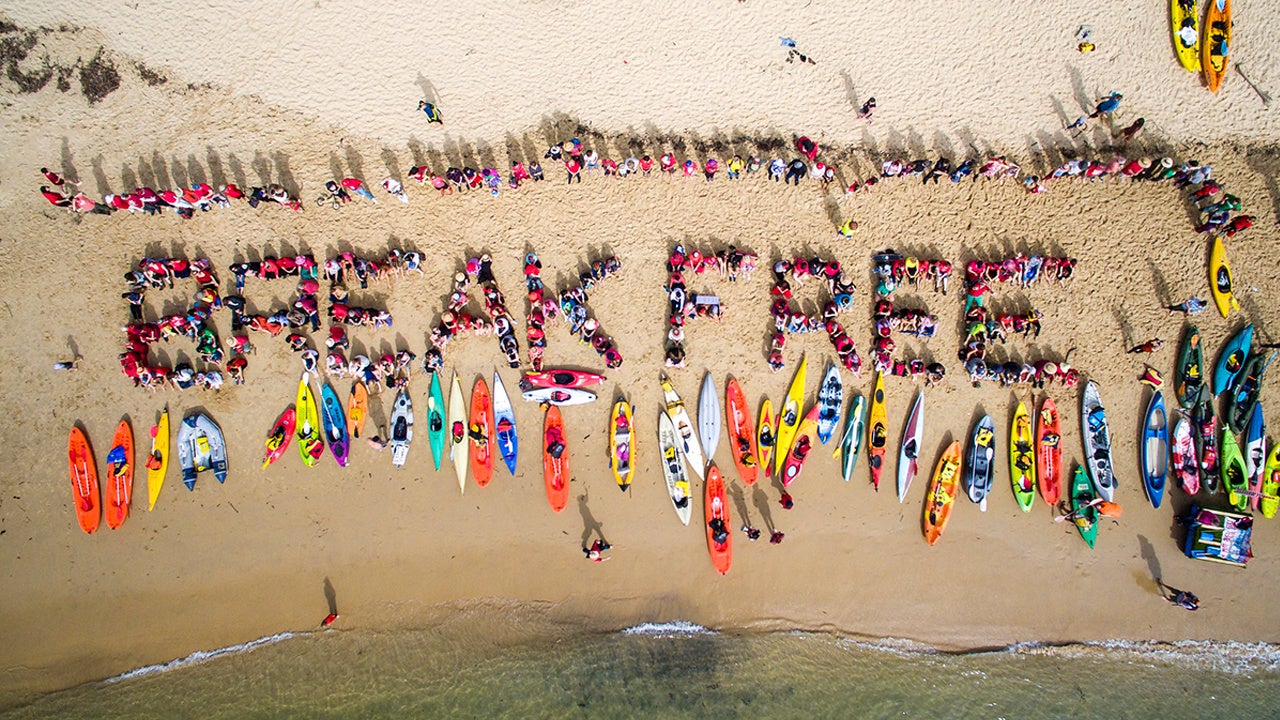 To close out 2019, we wanted to do something special. It’s not just the end of the year — it’s the end of an incredible decade of climate activism and a transition to the next. The challenge ahead is enormous, but if this year has taught us anything, it’s that more of us than ever before are ready to rise.

So enjoy the top 10 people-powered moments of 2019 from around the world. And for highlights from the last 10 years, be sure to checkout the 350.org 10-year timeline.

We’ll be back in 2020 with more Fossil Free News updates from around the world. From everyone at 350.org, we wish you a healthy, happy new decade – with climate justice for all.

In a historic victory after years of campaigning, the state of Paraná in Brazil passed a law in July to permanently ban fracking – and Santa Catarina state followed weeks later. It means Latin America’s largest shale reserves will go untapped, with 18 million people safe from the direct impacts of fracking. The wins energized a national debate to ban fracking across the whole country; municipal bans have already passed in hundreds of cities and towns across Brazil. Read more.

In September, the amount investors committed to divest from oil, coal, and gas companies reached more than trillion USD, blowing past the goal set last year of trillion divested by the end of 2020. And since September, we’ve already hit trillion! Follow the cities, companies, and institutions divesting with our divestment commitment tracker.

Indigenous leaders and allies held a March-May training tour for 1,160 people in nine U.S. cities. They were answering the call to stop the Keystone XL pipeline and protect water and ancestral lands. Construction continues to be debated and delayed – but people across the U.S. are prepared for creative resistance in case it resumes. Watch the wrap-up video from the tour.

After years of resistance, in June a Kenya tribunal cancelled a developer’s license to build a new coal plant at Lamu, a stunning coastal UNESCO world heritage site. It was a huge victory, made even sweeter by the fact that the court recognized the lack of public participation and risks to people and the environment. See the celebration.

Activists pushed New York’s Governor to halt the Williams Northeast Supply Enhancement pipeline, which would bring fracked gas to New York City. The company has re-applied for construction permits, but people are demanding a permanent ban and a Green New Deal to make sure it never gets built. Watch the recap.

A new platform to unite grassroots campaigns across Africa is bringing together learnings and resources from groups working to halt fossil fuel infrastructure and promote a transition to renewable energy. Thanks to local campaigning, in April South Africa’s Nedbank became the first African bank to stop project financing for coal, after they decided not to fund Thabametsi and Khanyisa coal plants.

The European Investment Bank (EIB) is the world’s biggest international public bank and the €555 billion lending arm of the European Union. Thousands of people pressured the bank to axe fossil fuels from its lending policy, and last month it permanently ended support for most fossil fuel projects! Read more.

9. Europe’s Gas Does Not Pass

Three iconic fights against gas won big victories in Europe this year. The MidCat pipeline between Spain and France, and Gothenburg terminal in Sweden were both cancelled, while fracking was banned in the UK. Read more.

10. Millions Strike for the Climate

September’s climate strikes were groundbreaking, with 7.6 million people in 185 countries taking part. Together, we snatched front pages of news outlets around the globe and put the fossil fuel industry on notice, setting the tone for what’s to come. Read more.

A Decade of Climate Action

Back in 2009, at the end of the last decade, the climate movement was small and scrappy. Together, we’ve grown into a diverse, powerful movement ready to take on the fossil fuel industry into the 2020s: a mission-critical decade for averting the worst of climate crisis.

Take a look at 350.org’s path through the past decade and the people-powered wins we’ve celebrated along the way.

That’s all for now. See you in the new year!