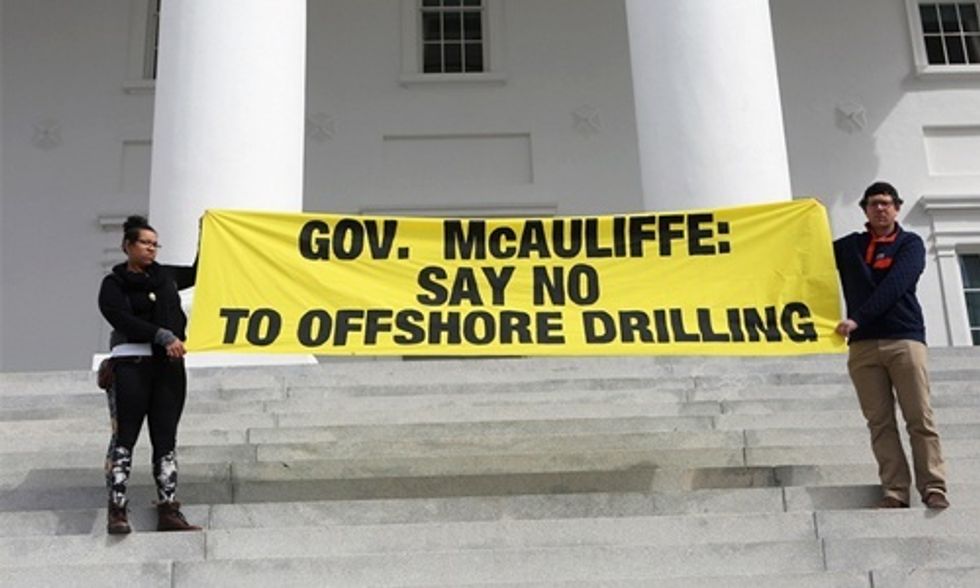 Major oil and gas companies have been eyeing the development of potential oil and gas reserves, while several geological surveying companies are awaiting permits to begin seismic testing. And while the voice of the people in opposition to these disastrous plans for Virginia’s natural resources is clear, Gov. Terry McAuliffe isn’t listening.

Greenpeace activists hold a banner in front of the Virginia State Capitol reading “Gov. McAuliffe: Say No To Offshore Drilling.” Virginia Gov. Terry McAuliffe supports drilling for oil off the coast of Virginia while city and town officials are opposing it. Photo credit: Julia Rendleman / Greenpeace

McAuliffe was elected Governor of Virginia in 2014 and he promptly aligned himself with the political right by joining the Outer Continental Shelf Governors Coalition (OSCGC) after the group appealed to his office directly. The OCSGC, which was convened by industry lobbyist group Consumer Energy Alliance and is chaired by North Carolina Gov. (and former Duke Energy executive) Pat McCrory, is one of the main groups behind the current push to open the Atlantic to oil and gas exploration.

McAuliffe joined the group to tout his claims that Atlantic drilling will bring thousands of jobs to the area and give Virginia energy independence. But lately, he’s been less than clear on this position.

Perhaps this is because, as the only Democrat in the OCSGC, he’s in opposition to the majority of his own party—including longtime friend and presidential candidate Hillary Clinton. McAuliffe has hit the campaign trail for Clinton several times and in his pro-Hillary frenzy before Super Tuesday, he slipped up by saying he will support her in opposing Atlantic drilling. Less than 24 hours later, he reversed course, claiming that he had had trouble hearing the question at the previous day’s rally.

While his spokesperson quickly corrected the misstep, this actually isn’t the first time he’s adjusted his stance. A week prior, he stated that he’d withdraw his support for offshore drilling without a revenue sharing agreement. And recently, his own Lieutenant Governor has come out strongly against drilling, with or without a revenue sharing agreement.

Voices of Virginians Against Drilling

In the absence of leadership from the governor’s office, locals in Virginia know that this decision is far from final. They’re optimistic that continued pressure will squash any plans for oil and gas drilling in the region.

This past weekend, I had the opportunity to meet with several people working against offshore drilling in Virginia Beach.

The folks we spoke with—which included conservationists, non-profit volunteers, coastal business owners and even the city’s Commissioner of Revenue—had different reasons for their opposition to drilling, but they all had one thing in common. They’re not buying the false job promises of jobs and energy independence touted by Gov. McAuliffe. They believe the longstanding beach economy built on tourism and healthy beaches offers far more to the community than offshore drilling.

Conservationist and Surfrider Foundation Volunteer Christina Trapani did rehabilitation work in the Gulf of Mexico after the BP Deepwater Horizon spill in 2010. She’s afraid what happened to wildlife in the Gulf could happen again if Atlantic drilling goes forward. “We treated turtles; a few hundred. I was there during intake. They were bringing in animals from offshore that were covered in oil. There are so many out there that we missed. The ones that came in where the lucky ones.”

And Commissioner of Revenue Philip Kellam said in a statement that he is worried about the impacts of drilling on Virginia Beach’s thriving oyster economy and the livelihoods of the entire community, including his sons.

While Virginians haven’t had oil and gas drilling off their coast this generation, they know the consequences that come with major spills and inevitable small leaks. They also know that the power to protect their coastal waters is in their hands.

“Our local voices really matter. There are eight different criteria for BOEM to hear and one of those is environmental impact. It’s also local voices, it's also elected leaders. The elected leaders need to speak for the people and carry our voices.” — Virginia Beach Business Owner Laura Wood Habr

From the local level to the federal level, there is more work to do in order close the door on Atlantic exploitation. The Bureau of Ocean Energy Management (BOEM) is expected to finalize its proposed five-year oil and gas leasing plan for 2017-2022 this month. With the release of the proposal will come a 90-day comment period and another opportunity for the public to voice its opposition. And when it comes, we’ll be ready.

From Virginia to the Gulf of Mexico to the Arctic, the power of our voices can turn the tide and force President Obama to stop all new offshore leases.

Sign on and tell POTUS to secure his climate legacy today!