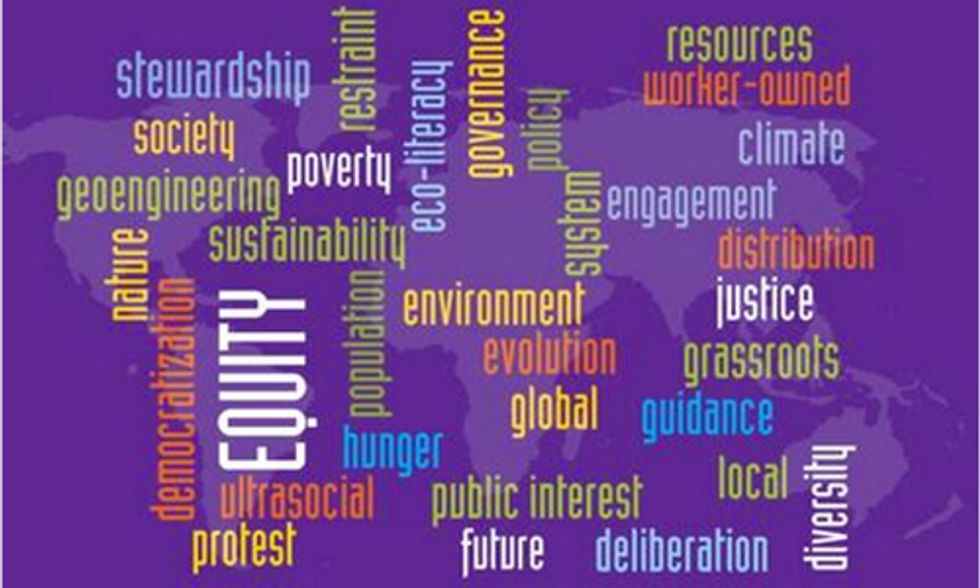 The business model that puts profit ahead of everything—that in fact looks at profit as the only thing—has created extensive human and environmental misery in the world.

The role of public activism is critical in pushing corporations to be more environmentally responsible. Image credit: Worldwatch Institute

Worldwatch Institute's new book, State of the World 2014: Governing for Sustainability, takes a look at how some entrepreneurs and business people are starting to reassess this model to become "triple-bottom-line" companies—ones that function more holistically to consider "people/planet/profit" in their impact of their practices. It calls this "a small revolution."

“Put simply, the conventional economic model—amoral capitalism—and the willingness of so many investors and consumers to tolerate it are two of the most challenging threats to preserving a livable human future,” writes Colleen Cordes, a public policy consultant and director of outreach and development for The Nature Institute, who authored the chapter The Rise of Triple-Bottom-Line Businesses. "A remarkable new breed of business is volunteering to be held publicly or even legally accountable to a triple bottom line: prioritizing people and the planet, while also promoting profits."

She writes that one of the major factors in getting these changes rolling is public pressure. In the last decade, as awareness of climate change and environmental degradation have grown, along with an increasing awareness of how a handful have profited handsomely while most workers are falling behind even in the face of growing productivity, environmentalists, labor unions, nonprofits, consumers and even investors have begun to take a harder look at how corporations conduct their businesses, from what they spend lobbying to what they put in their food.

While most large corporations are lagging behind, continuing to value profit at all costs, State of the World 2014 found that some, primarily privately held, small and medium-sized companies in the U.S., as well as in other countries like Canada and Chile, are starting to consider how to be more socially and environmentally responsible while still keeping an eye on the bottom line. And some larger companies like Patagonia and King Arthur Flour are starting to come on board too.

State of the World 2014 points out that a few major corporations are dabbling in the triple-bottom-line movement primarily through subsidiaries they've acquired. It lauds this engagement but also expresses concern that the movement's potential could be diluted if the parent companies are not strongly behind their subsidiaries' values—emphasizing the importance of organizations and individuals working to grow environmental and social justice awareness and talking to businesses about it.

“Although it could take years for a Fortune 500 benefit corporation to emerge, such conversations—and broader advocacy by citizens and public interest groups—could begin now to firm up and speed up that possibility,” says Cordes.

The book points to the role the environmental movement has played in moving both governments and corporations to be better planetary citizens, saying, "Citizens expect their governments to lead on sustainability. But governments’ progress has been lackluster. That’s not to say leadership is absent; it just often comes from the bottom up rather than the top down. Action—on climate, species loss, inequity and other sustainability crises—is being driven by local, people’s, women’s and grassroots movements around the world, often in opposition to the agendas pursued by governments and big corporations."

Despite the slow progress, that's an upbeat message, say some environmental leaders.

"This book is a manifesto of practical hope published in the shadow of accelerating environmental catastrophe," said Bill McKibben, founder of 350.org. "It tells us that we do not have to sit on our hands and close our eyes as we wait for the deluge. Instead, we can govern and lead with some courage in the interests of all humanity."

50 of the World's Largest Cities Ranked by People, Planet, Profit