People of Brazil Say No to Forest Law Changes 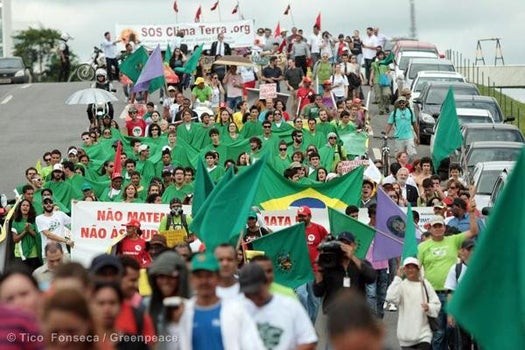 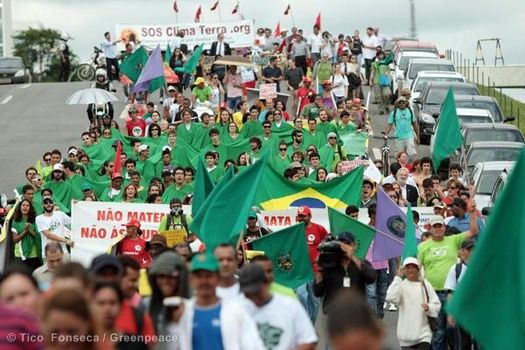 Thousands of people occupied the great lawns in front of the Brazilian National Congress sending a resounding message to President Dilma Rousseff against granting amnesty for illegal deforestation, exemption from the obligation to recuperate devastated Permanent Protection areas and restore legal reserve vegetation, and vehemently repudiating the new pro-ruralista legislation.

The demonstration that took place Nov. 29 in Brasilia shows how far the House of Representatives and Federal Senate are failing to represent the interests of Brazilian society as a whole in the discussions on the proposed changes to the Forest Law. Thousands of students, environmentalists, researchers, family farmers, progressive parliamentarians and representatives of civil society occupied the lawns in front of the Congress and the Três Poders Square, in Brasilia, to show that Brazil is not willing to accept modifications to its environmental legislation that only promote the interests of a favored few—in this case the big agribusiness and landholding interests of the ruralistas.

The group unfolded a peaceful protest against the legal text of the draft reform bill that will come before the Senate for voting, probably in the next few days. Criticism is most vociferous against the proposal to pardon environmental crimes committed before July 2008, the proposed changes to the form of calculating the size of Permanent Protection and legal reserve areas, the exemption from the obligation to recuperate illegally deforested areas and the transfer of the power of decision on a series of environmental issues to the state and municipal spheres of authority.

Former Senator and ex-Minister of the Environment Marina Silva defended the mobilization of the people to pressure senators to reject the retrograde proposals and to call on the president to veto the provisions that promote amnesty and reduce protection for the legal reserve and Permanent Protection areas. “Dilma will be more than justified in vetoing these points of the law in keeping with the commitments she made during the second round of the presidential election campaign,” she said.

Senator for Amapa Randolfe Rodrigues (PSOL) also spoke out during the demonstration. He regretted last week’s approval of the draft version presented by Senator for Acre Jorge Viana (PT). “The draft bill as it stands only benefits a handful of big agribusiness groups and large landowners and it will actually be promoting and rewarding deforestation in the Amazon. The text sets us against the tide of history, it stands for economic power alone, which destroys and debilitates so many beautiful things,” he said.

Via Campesina representative Luiz Zarref feels that the people have been sending very clear messages that they are not willing to accept the changes proposed in the ruralistas’ draft bill. “Agribusiness has no serious commitments to society as a whole. They release their pesticides from their crop-dusting aircraft onto the crops, families, cities forests and wild animals below. Those that only know how to produce commodities for export see the forest as an enemy. Family-based agriculture produces food crops without resorting to the destruction of the forests,” he said.

University of Brasilia sociology student Pedro Piccolo highlighted the grassroots mobilization on this issue and declared that society’s dissatisfaction with the changes that are being pushed through in the Senate and House of Representatives is very clear. “The Congress and the federal government are on their knees before the big agribusiness interests. The supposed concern for governability is casting out our dreams of a better country,” he said.

There were also around 300 children in the Tres Poderes square showing the Congress and the president of the Republic that the upcoming generations are the ones that will be most highly jeopardized by the changes to the Forest law. A petition with more than 1.5 million signatures was handed in to the president of the republic expressing society’s deep discontent with the direction taken by the debate on the draft bill in the Senate and House of Representatives and calling on the president to veto those provisions that contemplate amnesty for deforestation and the reduction of Permanent Protection and Legal Reserve areas.