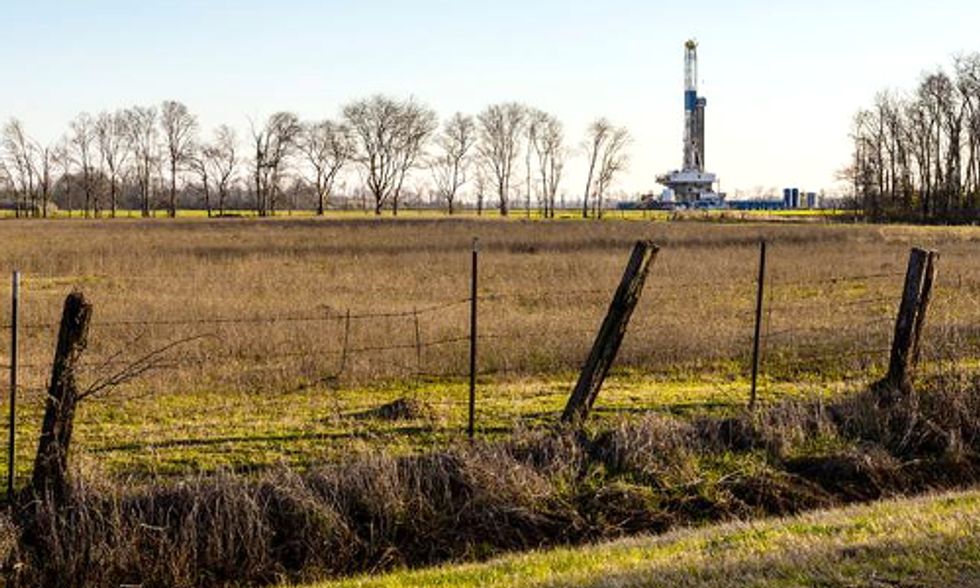 A gas company is attempting to use a half-century old Pennsylvania law to frack underneath the land of property owners who refuse to allow the controversial practice of fracking on their land, yet a majority of Pennsylvanians may be unaware as two of the state's top three newspapers have failed to mention the contentious issue.

'Forced pooling' allows companies to drill underneath the property of landowners that have refused to sign a lease if enough of their neighbors already have. Photo credit: Daniel Foster /Flickr

Hilcorp Energy, a Texas-based oil and gas company, is pushing legal action in Pennsylvania to be able to drill underneath the property of landowners that have refused to sign a lease if enough of their neighbors have already signed, a practice known as "forced pooling." The "unused and outdated" law, which is "pitting neighbor against neighbor" as reported by the Associated Press, would "shred private property rights" according to the Pittsburgh Tribune Review, the only of the three highest circulating papers in Pennsylvania to cover the story. The other two, The Philadelphia Inquirer and the Pittsburgh Post-Gazette, have completely overlooked the issue which has received national attention.

The "forced pooling" law would force landowners to allow the use of fracking to extract natural gas reserves underneath their property without their consent, creating concerns about the impact on property values and the threat of water pollution. A leaked document from the U.S. Environmental Protection Agency (EPA) stated that natural gas extraction has caused methane to leak into domestic water wells, causing "significant damage" to the drinking water supply of the town.

Pennsylvania isn't the only state dealing with the "forced pooling" issue. Energy companies have been exploiting similar laws in many states including in Illinois and Ohio to the outrage of unsuspecting landowners. In Ohio, citizens are "furious" about the ruling that one citizen fears will "make him legally responsible for spills and other damage" according to the Associated Press. Some residents have "resigned to losing future income," while dozens of others are pushing forward lawsuits in an attempt to stop the forcible drilling.

There is a similar sentiment in Pennsylvania even among those who support natural gas drilling and fracking. For example, Pennsylvania's Gov. Corbett (R-PA)—a strong proponent of natural gas extraction in Pennsylvania—opposes the law, likening it to "private eminent domain." And Marcellus Drilling News, a pro-fracking news site, has expressed disapproval of Hilcorp's use of the law, calling it "the low road."

Hilcorp first requested to use the 1961 Pennsylvania law in July, when property owner Bob Svetlak refused to give up the land he has lived on since 1949, and moved forward with a legal action in October. The case bounced around different ruling bodies in the state with a final hearing eventually scheduled for late March 2014  that was subsequently postponed until early May due to the controversy surrounding the issue.

Since Hilcorp's first request in July, the Pittsburgh Tribune Review has published an editorial against the law, saying it "shreds private property rights" and is "patently unconstitutional." But the two other top Pennsylvania newspapers—Pittsburgh Post-Gazette and The Philadelphia Inquirer—have remained silent on the issue over the same period (which is based on a Nexis search of hydraulic fracturing or frack! or Hilcorp from July 1, 2013, to April 13, 2014):

While never addressing the "forced drilling" issue, the Pittsburgh Post-Gazette, which publicly "supports a well-regulated gas drilling industry," has been calling for fracking underneath the state's public lands—an issue that also has many citizens concerned—praising a deal to drill underneath a county park and decrying a proposed moratorium on drilling underneath state parks. The Philadelphia Inquirer, on the other hand, has been publishing editorials calling for prudence and accountability when it comes to fracking, but like the Post-Gazette, has never addressed the "forced drilling" issue.