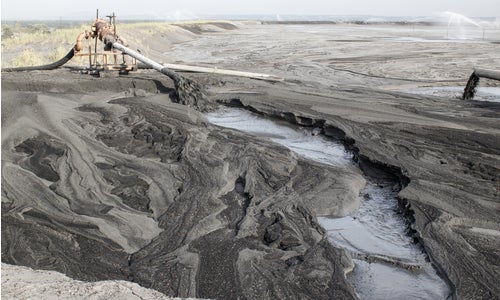 Across the U.S., the shale rush has unleashed a frenzy of excitement about domestic energy supplies. But the oil and gas produced from fracking comes along with billions of gallons of wastewater and tons of mud and rock that carry radioactive materials and heavy metals. As problems with disposal mount, the industry has offered mostly vague promises of “recycling” to describe how the waste will be handled over the long run. 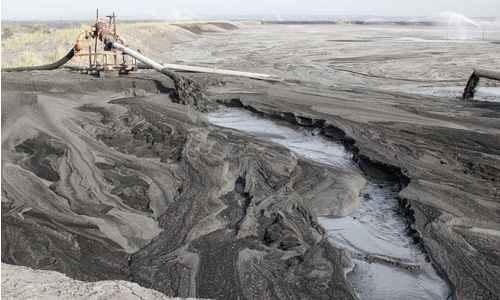 The health hazards from coal ash are increasingly drawing attention from federal regulators.

As the nation gears up to produce vast amounts of shale oil and gas—and the toxic waste that comes along with it—it’s worth taking a look back at the failures of another industry to handle its toxic waste responsibly—the coal industry.

Communities across America are still struggling to resolve problems left behind decades ago from coal mining and related industrial pollution.

In Pennsylvania, state officials have begun to quietly fast-track plans to allow barges to haul 3.5 million tons a year of hazardous coal ash from one disposal site to a new one, despite objections from the state’s environmental regulators describing the disposal plans as seriously deficient.

The hazards of shipping the coal ash in rivers are similar to those associated with fracking waste. A spill could directly pollute the rivers that serve as drinking water supplies to millions with an entire barge full of the heavy-metal laden waste. And with coal ash, there are unique hazards—there are no rules that would require the ash to be hauled in covered barges to prevent the arsenic- and mercury-laced dust from blowing into rivers and onto neighboring communities, according to Coast Guard officials.

And, the state still lacks a long-term plan for how to safely handle the coal waste without polluting air or water once the barges arrive at their desination.

For decades, entranced by economic benefits of mining and burning coal, state and federal regulators allowed coal giants to put off dealing with their toxic waste—with the result that these waste piles and pits have grown to enormous proportions.

Since 1974, coal company FirstEnergy has mixed ash and scrubber waste from its Bruce Mansfield power plant in Shippingport, PA, with water and pumped it via pipeline to an enormous lagoon called Little Blue Run. Little Blue Run is now the nation’s largest unlined wastewater pit, spanning two states and bordering a third. Under orders to close the pit down and clean up Little Blue Run, FirstEnergy must now tackle the enormous challenge of clean up.

Early indicators suggest that state regulators may once again kick the can down the road. Currently FirstEnergy plans to ship its waste from Little Blue Run to another unlined disposal site, the La Belle coal mine waste dump in Luzerne Township, PA. This is a site where residents have long complained of a litany of health problems they say are tied to the coal waste.

FirstEnergy’s plan has drawn fire from a broad array of community groups. Even the state’s Department of Environmental Protection (DEP) has voiced concerns. In October, the DEP sent a 29-page letter to FirstEnergy, detailing more than 100 problems with the company’s plan to empty Little Blue Run, cap the site with a foot of soil and leave much of the ash buried with no liner below to keep water from washing heavy metals downwards towards the water table. The rest will be shipped to Luzerne.

Community groups in both Luzerne and Shippingport are lining up in opposition to the plan, citing pollution hazards at both the old storage site and the new one.

Nonetheless, the state has moved behind the scenes to grease the wheels for FirstEnergy. According to the Pittsburgh Post-Gazette, FirstEnergy’s barging plan “could be approved by the state before the public gets a chance to fully comment on important parts of the proposal, according to four environmental organizations.”

The barging permit is being pushed through in what lawyers for the groups say is a break with precedent. “For some reason FirstEnergy doesn’t want to say in the general permit what it’s going to do with the waste, and DEP seems to be taking the position that the permit doesn’t require that,” Alayne Gobeille, an Environmental Integrity Project attorney told the paper. “But that’s different from my understanding of the general permit provisions and different than what DEP required in the past.”

The contractor that FirstEnergy plans to use to barge the waste from Little Blue Run to La Belle has a long history of environmental violations. In March, the Environmental Integrity Project and Public Justice announced a lawsuit against the contractor, Matt Canestrale Contracting Inc., over improper disposal of tons of coal-ash waste at the La Belle coal mine dump.

That contractor has even previously sunk a barge carrying coal waste at that very same La Belle site. On May 16, 2006 at approximately 1:30 a.m., a 24-inch gash from a submerged mooring ring caused a Matt Canestrale barge carrying more than one thousand tons of coal waste to sink in the Monongahela River. This sent a plume of more than 35 tons of the coal waste into the river, which serves as a drinking water source for Pittsburgh and other towns.

The company’s slow response to the spill prompted the DEP to send a Jan. 2, 2007 letter to the company complaining. Their employees, “seemed unaware that a spill to the Monongahela River needed to be properly remediated and reported to the Department,” the letter said, adding that that the company’s clean-up methods used after the spill were “inadequate.”

FirstEnergy’s plan calls for Matt Canestrale to haul 45 barge loads a day from Little Blue Run to the La Belle site starting as soon as next year.

The health hazards from coal ash are increasingly drawing attention from federal regulators, as evidence of its toxicity slowly mounts, but locals say the problems in their community are already clear.

“We’ve had problems with cancer and everything else,” Luzerne Township Supervisor Ted Kollar told CBS News, describing how the coal ash already stored in La Belle has affected his town.

The U.S. Environmental Protection Agency (EPA) is currently considering a move to label coal ash hazardous waste, which would bring it under federal oversight through the Resource Conservation and Recovery Act.

Pennsylvania regulators have opposed that plan, saying it would complicate efforts like FirstEnergy’s plan to empty Little Blue Run. In October, then-head of the Pennsylvania Department of Environmental Protection, Michael Krancer, sent a letter to the EPA in opposition.

“Jumping the gun to regulate coal ash as hazardous waste would actually be environmentally detrimental,” Krancer wrote. “We have particular concern on that front here in Pennsylvania, since it would block the use of coal ash for beneficial reuse for such uses as, among other things, abandoned mine reclamation and acid mine drainage remediation.”

But lawyers say using coal ash to reclaim unlined mines is just mixing two wastes together and calling it clean.

“Dumping coal ash onto unlined gob piles is not a solution to mine drainage pollution and isn’t fair to communities living near these sites,” said Gobeille. “It doesn’t make sense to ship the same toxic waste Pennsylvania acknowledges is a threat to health and the environment at the Little Blue Run impoundment to an unlined mine dump and call it beneficial.”

Despite the state’s struggle to handle the billions of gallons of waste produced by coal plants, state officials are doubling down on fossil fuels and demonizing anyone who parts company with them.

In June, Gov. Corbett (R-PA) issued a statement in response to President Obama’s climate change proposal, calling it “not only a war on coal, as suggested by a White House climate adviser, but also a war on jobs.”

The governor also recently spoke at a shale gas industry conference in Pittsburgh, where he similarly focused on fracking jobs rather than public health impacts. “The opponents of drilling have really become what I would call economic change deniers,” he told the crowd.

Of course, the question remains whether, decades from now when the jobs are largely gone, the accumulated waste from both fracking and coal ash will still be plaguing the state and its residents.

In the meantime, the wastewater from both industries continues to flow.