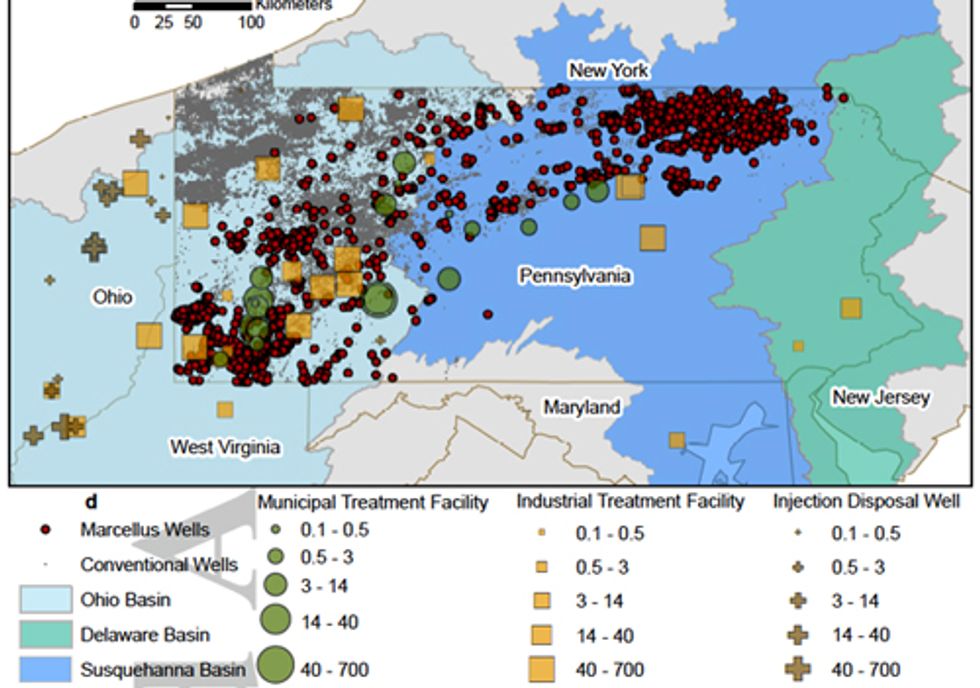 The total amount of fracking wastewater from natural gas production in Pennsylvania's Marcellus shale region has increased by about 570 percent since 2004, as a result of increased shale gas production, according to a study released yesterday by researchers at Duke and Kent State universities.

Though hydraulically fractured natural gas wells in the Marcellus shale region produce only about 35 percent as much wastewater, per unit of gas recovered, as conventional wells, according to the new analysis, the volume of toxic fracking wastewater from Pennsylvania is growing and threatening to overwhelm existing injection wells in Ohio and other states.

“It’s a double-edged sword. On one hand, shale gas production generates less wastewater per unit. On the other hand, because of the massive size of the Marcellus resource, the overall volume of water that now has to be transported and treated is immense. It threatens to overwhelm the region’s wastewater-disposal infrastructure capacity,” said Brian D. Lutz, assistant professor of biogeochemistry at Kent State who led the analysis when he was a postdoctoral research associate at Duke.

“This is the reality of increasing domestic natural gas production,” said Martin W. Doyle, professor of river science at Duke’s Nicholas School of the Environment. “There are significant tradeoffs and environmental impacts whether you rely on conventional gas or shale gas.”

Lutz and Doyle published their analysis this week in the peer-reviewed journal Water Resources Research.

They analyzed gas production and wastewater generation for 2,189 gas wells in Pennsylvania, using publicly available data reported by industry to the state’s Department of Environmental Protection in compliance with state law..

“We found that on average, shale gas wells produced about ten times the amount of wastewater as conventional wells, but they also produced about 30 times more natural gas,” Lutz said.  “That surprised us, given the popular perception that hydraulic fracturing creates disproportionate amounts of wastewater.”

Equally surprising, Doyle said, was that well operators classified only about a third of the wastewater from Marcellus wells as flowback from hydraulic fracturing; most of it was classified as brine.

“A lot of attention, to date, has focused on chemicals in the flowback that comes out of a well following hydraulic fracturing,” he said. “However, the amount of brine produced—which contains high levels of salts and other natural pollutants from shale rock—has received less attention even though it is no less important.”

Brine can be generated by wells over much longer periods of time than flowback, he noted, and studies have shown that some of the pollutants it contains can be as difficult to treat as many of the chemicals used in hydraulic fracturing fluids.

The Marcellus shale formation stretches from New York to Virginia and accounts for about 10 percent of all natural gas produced in the U.S. today.  Much of the current production is in Pennsylvania. Prior to technological advances in horizontal well drilling and hydraulic fracturing that made the shale gas accessible, the region accounted for only about 2 percent of the nation’s output, according to the Duke University press release.

In hydraulic fracturing, large volumes of water, sand and chemicals are injected deep underground into gas wells at high pressure to crack open shale rock and extract its embedded natural gas. As the pace of shale gas production grows, so too have concerns about groundwater contamination and what to do with all the wastewater.

“We need to come up with technological and logistical solutions to address these concerns, including better ways to recycle and treat the waste on site or move it to places where it can be safely disposed,” Doyle said. “Both of these are in fact developing rapidly,” he added.

“Opponents have targeted hydraulic fracturing as posing heightened risks, but many of the same environmental challenges presented by shale gas production would exist if we were expanding conventional gas production,” Lutz added. “We have to accept the reality that any effort to substantially boost domestic energy production will present environmental costs.”

Lutz and Doyle conducted their analysis with no external funding. Aurana N. Lewis, who graduated in 2012 with a Master of Environmental Management degree from Duke’s Nicholas School, co-authored the paper with them.