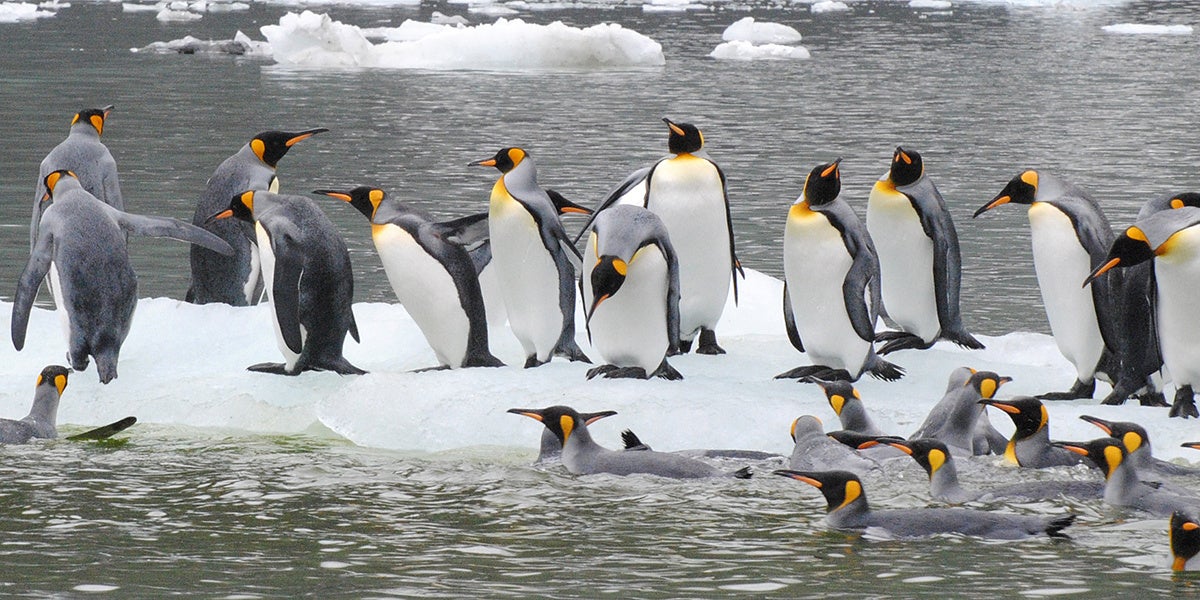 The arduous journey that king penguins must make in order to hunt fish to bring back to their young could become even longer as the climate warms, research suggests.

The study finds that future ocean warming in Antarctica could drive the penguins’ primary hunting grounds further poleward—away from their favored breeding spots.

If little is done to tackle climate change, up to 70 percent of king penguins could be forced to find new places to breed by 2100, the lead authors told Carbon Brief.

However, if these animals cannot find anywhere suitable to move to, they could be at risk of “disappearing” by the end of the century, the authors added.

King penguins are well attuned to life in harsh Antarctic conditions. Breeding pairs raise their chicks on sub-Antarctic islands, including the Falklands and the Crozet Islands. In these spots, temperatures stay above freezing and predators, such as leopard seals, are kept at bay.

However, to find food for their chicks, adult penguins must venture to an ocean boundary known as the Antarctic Polar Front, where cold Antarctic waters meet and sink beneath warmer waters from mid-latitude regions. In these less frigid waters, a number of Antarctic fish species gather in large numbers.

A typical journey to this ocean boundary, which is currently situated in between the penguins’ most northern and southern breeding islands, takes seven to ten days and stretches over 300 to 500 kilometers (approximately 186 to 311 miles).

However, future ocean warming could drive the Antarctic Polar Front to move polewards—further away from penguin breeding sites, according to Dr. Robin Cristofari from the University of Turku, Finland, Dr. Celine Le Bohec from the National Scientific Research Centre in France and Dr. Emiliano Trucchi from the University of Ferrara, Italy, who jointly led the study published in Nature Climate Change.

If climate change continues unabated, the journey to find food could become impossible from some breeding islands, they told Carbon Brief in a joint interview:

For the study, the researchers used a set of global climate models to simulate changes to future sea temperatures and, therefore, the potential foraging distance from each penguin breeding island.

The models used three different future scenarios of greenhouse gas emissions, ranging from a scenario where global warming is limited to 2°C above pre-industrial levels (RCP2.6) to a “business as usual” scenario where future climate change continues to rise unchecked (RCP8.5).

Based on their research, the scientists determined that 700 kilometers (approximately 435 miles) was the maximum distance that penguins could travel to hunt fish.

The maps below show the location of the penguins’ breeding islands (numbered) and the foraging area (dashed red line) during 1981-2005 (left) and under a future high emissions scenario in 2100 (right). The shaded blue areas show the extent of Antarctic sea ice.

The location of the penguins’ breeding islands (numbered and colored; see text above) and foraging area (dashed-red line) in a historical period from 1981-2005 to a future high emissions scenario in 2100. Shaded blue shows the extent of Antarctic sea ice. Cristofari et al. (2018)

The right-hand map shows that the foraging area is expected to move out of reach of some islands by 2100, including Tierra del Fuego, the Falklands, Marion and Prince Edward and Crozet.

Together, these islands are home to roughly 70 percent of the total breeding population of king penguins, the research finds.

However, some southern islands are expected to become closer to the foraging boundary as it moves polewards. These include South Sandwich and Bouvet.

On the charts, the red-dashed line shows the upper limit for foraging distance, beyond which penguins cannot successfully rear their chicks. 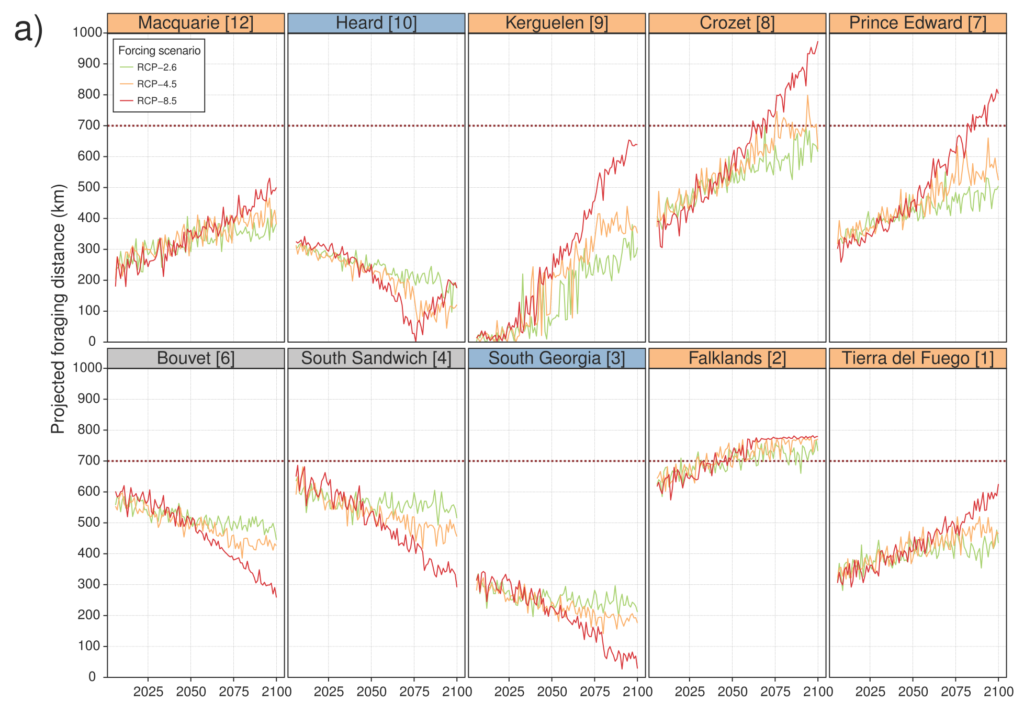 Under the high emissions scenario, 49 percent of the total population are expected to lose their breeding grounds completely by 2100, while a further 21 percent could “see their habitat strongly altered,” the researchers said.

The results also show that, even under low and intermediate scenarios, the Crozet and Falkland Islands are likely to become unworkable breeding grounds.

“The largest colonies on Crozet will still be in trouble under RCP4.5 and RCP2.6, which corresponds to around 1m breeding pairs,” the researchers said.

The results show that a large proportion of king penguins could be forced to leave their breeding islands as the climate warms. However, it is not yet clear whether these animals will be able to successfully relocate to more southerly islands, which could become closer to the foraging grounds.

“King penguins move a lot among islands and, if a new suitable island becomes available, they will likely colonize it. The problem is that the new islands have to become available before the old one is not suitable anymore,” the researchers said.

Although the southern islands are expected to become closer to the Arctic Polar Front, the islands may be covered by sea ice and, therefore, be too cold for penguins to rear their chicks successfully.

“Southern islands may be still too cold for the king penguin to breed when northern islands get too far from the food,” the researchers said.

If no suitable breeding spots emerge in time, a large proportion of king penguins could “disappear” by the end of the century, the researchers said. In their paper, they conclude:

“Under the ‘business-as-usual RCP8.5 scenario, 70% of the present-day 1.6m king penguin breeding pairs are expected to abruptly relocate or disappear before the end of the century.”

The new study provides an “interesting and well executed” first look at how climate change could threaten king penguins, said Dr. Norman Ratcliffe, a seabird ecologist from the British Antarctic Survey (BAS), who was not involved in the research. He told Carbon Brief:

The research shows that some breeding colonies could be protected if the world were to limit the amount of future climate change, he added:

“It’s a matter of cutting global emissions. There’s not very much compensatory habitat management you could do—you can’t create islands in the ocean.”