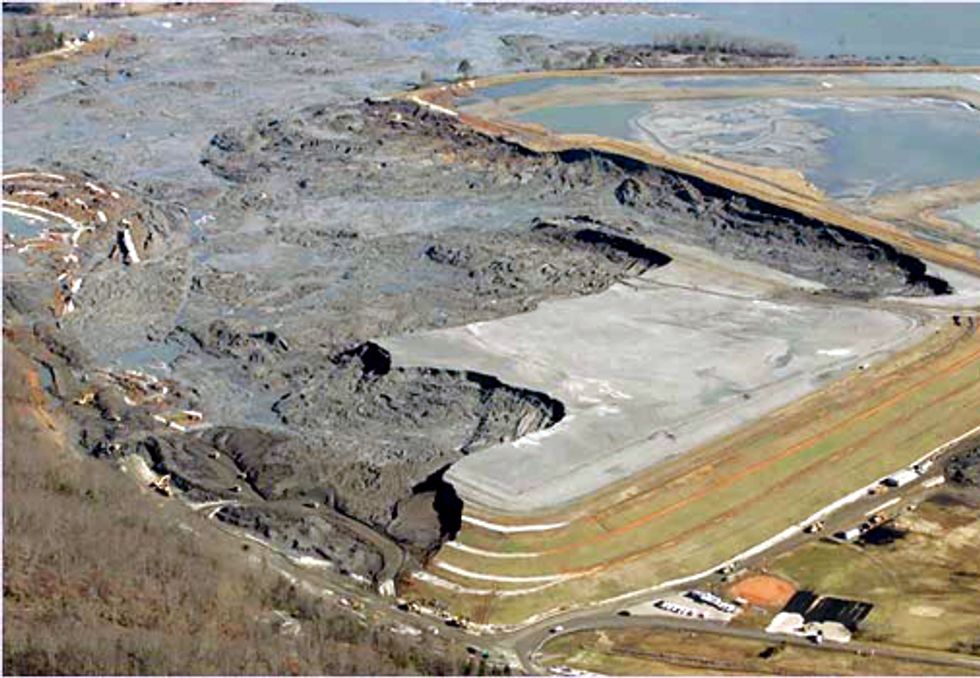 This coal ash slurry near the Kingston Fossil Plant in Harriman. Federal studies have long shown coal ash to contain significant quantities of heavy metals like arsenic, lead and selenium, which can be a threat to water supplies and human health.

The Congressional Research Service issued an analysis of two pending pieces of coal ash legislation—H.R. 2273 and S.3512—finding that the bills lack a clear purpose and would not ensure state adoption and implementation of standards “necessary to protect human health and the environment.” These bills—one passed by the House of Representatives in October 2011 and the other now pending in the Senate—would prevent the U.S. Environmental Protection Agency (EPA) from ever setting federally enforceable safeguards for the disposal of toxic coal ash.

Just days before the 4th anniversary of the devastating billion-gallon coal ash spill in Kingston, TN, that damaged and destroyed dozens of homes, the report concludes that both bills:

Furthermore, the report questions the reason for creating a program that fails to address the risks posed by both dry and wet disposal of coal ash stating, “Absent the creation of standards applicable to CCR [Coal Combustion Residuals] landfills and surface impoundments that address risks specifically associated with CCR disposal, the purpose of creating a CCR permit program is not clear.”

“The Congressional Research Service has confirmed what we’ve known all along,” said Earthjustice attorney Lisa Evans. “The Senate coal ash bill is a sham that will not protect communities from toxic coal ash or prevent another Kingston disaster. Congress must get out of the way and let EPA do its job.”

The Senate bill—the so-called “Coal Ash Recycling Act of 2012,” (S.3512)—blocks an EPA rulemaking that would prevent spills and water contamination at hundreds of coal ash sites across the country. More than 200 sites have already contaminated nearby rivers, lakes, streams or aquifers with dangerous pollutants like arsenic, lead, selenium and more. Introduced earlier this year, rumors abound that S.3512 could be attached to unrelated must-pass legislation at any time, the result of intense lobbying from the coal and power industries.

“This report highlights that both bills would do little or nothing to change the status quo of coal ash dumps prone to leaking coal ash pollutants or catastrophic breaches,” said Lisa Widawsky Hallowell, attorney with the Environmental Integrity Project. “Given the fact that there are nearly 200 damage cases nationwide, coal ash legislation that fails to phase out dangerous surface impoundments and strips the EPA of the ability to set minimum design criteria for landfills is simply indefensible in 2012.”

Millions of tons of coal ash are currently stored in immense earthen dams. The report states that a structural failure “could result in a catastrophic release of coal ash slurry.” Due to the unique risks posed by coal ash ponds, the EPA proposed that dangerous surface impoundments be subjected to design and inspection requirements similar to those established by the Mine Safety and Health Administration (MSHA). Although the CRS report states that the “potential for structural failure could be minimized by various means, including ensuring that the units meet certain design standards and are inspected regularly,” the report notes that these requirements are absent from the House and Senate bills. This absence is critical, as the report also notes the “majority of states” do not have “siting controls, inspection, or structural integrity requirements for surface impoundments—requirements necessary to minimize the potential of a structural failure.”