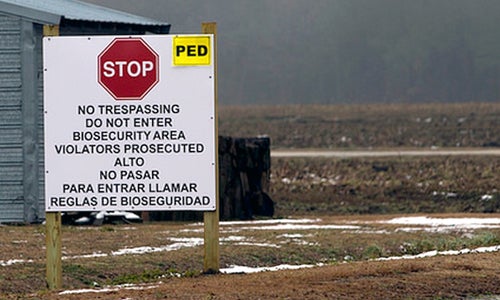 An estimated 5 million hogs have died since the Porcine Epidemic Diarrhea Virus (PEDv) was discovered last May, and federal officials along with industry experts are scrambling to control the continued spread of the disease, reports Reuters.

This slideshow exposes the reckless disposal practices of an industrialized swine facility in North Carolina hit with the PED virus. Warning: The slideshow contains graphic images that may be unsuitable for some viewers.

Confirmed PEDv cases increased by 296 during last week alone, bringing the total number to 4,757, according to data released on Thursday by the U.S. Department of Agriculture’s National Animal Health Laboratory Network (NAHLN). The discrepancy between the relatively small amount of cases and the high death toll is that one case can represent an individual animal or an entire herd at one site.

To stem the spread, U.S. and Canadian hog industries recently developed partnerships to research whether feed or feed ingredients factored into the transmission of PEDv, the National Pork Board said this week. The report from NAHLN does not include test results from feed samples.

Even though the disease is spreading, the number of affected states remains at 27, the animal researchers said.

PEDv, which doesn’t directly affect people and is not a food safety risk, causes diarrhea, vomiting and severe dehydration in pigs. While older pigs have a chance of survival, 80 to 100 percent of piglets die from the virus.

“The smaller the pig the harder it is for them to recover and come back,” added Stateler.

The spread of the virus has already decreased market ready hog supply in the Midwest and along the East Coast, forcing some pork packing plants to cut back their slaughter operations.

Last month, Waterkeeper Alliance and North Carolina Riverkeepers called on the state’s Commissioner of Agriculture, Steve Troxler, to protect public and environmental health against the swine industry’s handling of the PEDv outbreak.

Burying dead pigs in mass graves is common practice in mass casualty events, and Waterkeepers has raised concerns that areas of the coastal plain, where most infected swine facilities are located, stand a high risk of shallow groundwater and nearby waterway contamination.

“While we understand that PED cannot be directly transmitted to humans, the massive numbers of pigs that have died from this virus pose a significant concern to the public health if not disposed of properly,” said Gray Jernigan, North Carolina-based staff attorney for Waterkeeper Alliance. “There is currently little to no government oversight of carcass disposal in the midst of this epidemic, and we are calling on the state to take action as authorized by law to protect the citizens of North Carolina.”