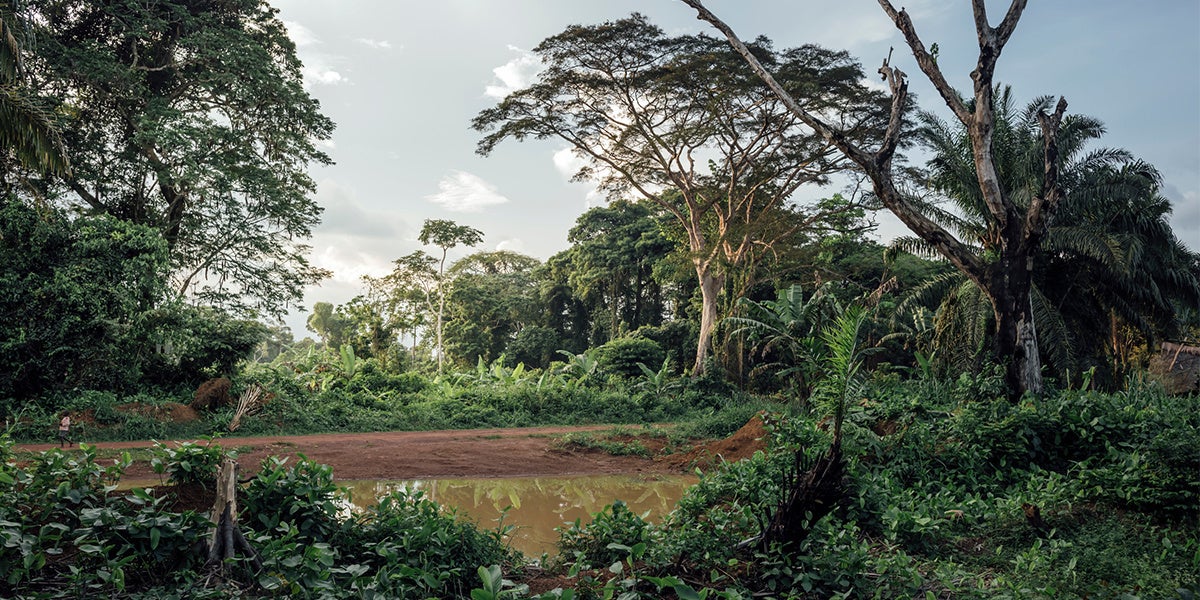 A team from Greenpeace Africa has been studying tropical peatland near Lokolama. Kevin McElvaney / Greenpeace

Just over a year ago, scientists announced the discovery of the world’s largest intact tropical peatland in a remote part of the Congo’s vast swampy basin.

The Cuvette Centrale peatlands stretch across an area of central Africa that is larger than the size of England and stores as much as 30 billion tonnes of carbon.

Now, the same research team has published a new study finding that future climate change, along with deforestation, could threaten the peatlands’ ability to soak up and store large amounts of carbon.

If left unaddressed, these threats could cause the Congo peatlands to turn from a carbon sink into a carbon source, the study says. This means that the peatlands could contribute to climate change by releasing more carbon than they are able to absorb.

The Cuvette Centrale, which spans both the Republic of the Congo and the Democratic Republic of Congo (DRC) (see map below), is the second-largest tropical wetland in the world. 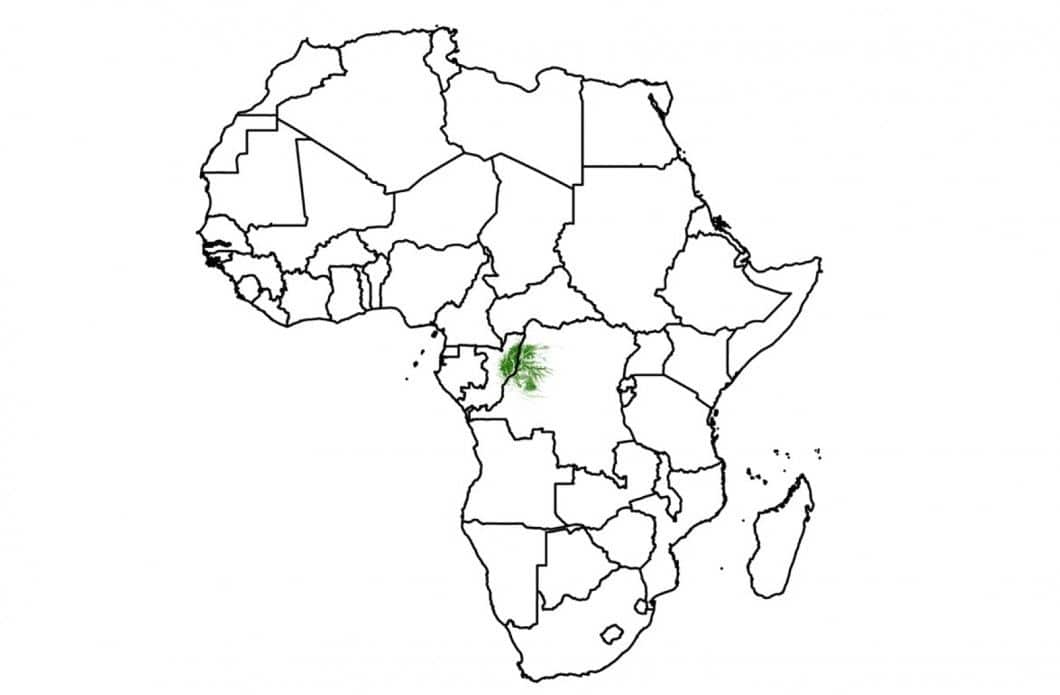 The peatlands within the Cuvette Centrale covers 145,500 sq km and contains 30 percent of the world’s tropical peatland carbon, according to the 2017 Nature paper. This is equivalent to about 20 years’ worth of U.S. CO2 emissions from burning fossil fuels.

Across the world, peat covers just 3 percent of the land’s surface, but stores one-third of the earth’s soil carbon.

Peat is a wetland soil made of partially decomposed plant debris. It is usually found in cooler, waterlogged environments, explained Dr. Greta Dargie, a research fellow from the University of Leeds and lead author of the study published in the journal Mitigation and Adaptation Strategies for Global Change. She told Carbon Brief:

“Under waterlogged conditions, the usual decomposition of dead trees and leaves is slowed, meaning there is a build-up of carbon-rich material which we call peat. A long slow build-up means that peatlands store enormous quantities of carbon.”

Future climate change presents one of the largest threats to the Congo peatlands, the new study finds.

It is less clear how global warming could affect rainfall in the region, but research (pdf) suggests that the peatlands could experience an overall reduction in rainfall and an increase in the number of dry periods as the climate warms.

A combination of less rainfall and higher temperatures could cause parts of the peatlands to dry out, which could reduce the rate of plant decomposition and, therefore, the rate that the peatlands can absorb carbon from the atmosphere.

Drier conditions could also prompt the peatlands to start releasing larger amounts of carbon, said professor Simon Lewis, a study author from the University of Leeds and University College London, and one of Carbon Brief’s contributing editors. He told Carbon Brief:

“The critical insight here is that the central Congo peatlands are probably maintained by rainwater. So, even modest reductions in dry season water-logging, perhaps through rising temperatures and increasing evaporation rates, would mean the whole system moves from a carbon sink to a carbon source.”

In other words, climate change could cause the Congo peatlands to start releasing more carbon into the atmosphere than it is able to absorb.

Another threat to Congo’s peatlands could come from a potential rise in deforestation for wood and palm oil production in the region, the study notes.

The removal of trees from above peatlands can leave large areas of ground exposed to the sun, which can cause the boggy ground to dry out. This can cause the peatlands to release carbon at a faster rate.

At present, government officials from the DRC have granted logging access to 20 percent of the forested peatlands. The extent of the logging concession agreements (red outlines) is shown on the chart below, where dark grey indicates peatland and light grey shows other types of land cover.

At least one concession agreement (shown in shaded red) has also been approved for the construction of an oil palm plantation in the Republic of the Congo part of the peatlands, which would take up 4,200 sq km of forested peatlands. 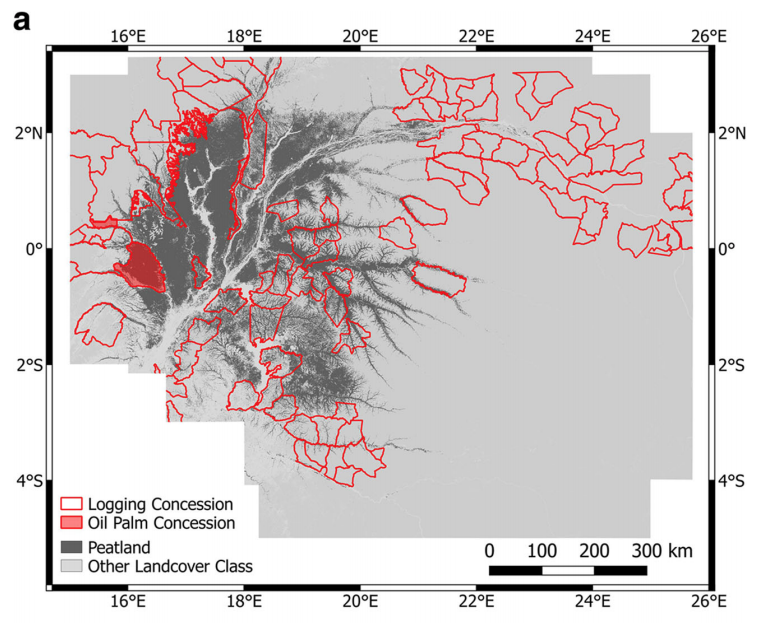 Despite these agreements being reached, logging operations are yet to commence in the peatland forests. This is likely to be because the DRC introduced a national ban on logging in 2002, the study notes.

However, the country’s government is currently considering lifting this ban, which would mean logging could be permitted across large areas of the peatland region.

Plans to lift the ban are being driven forward by the French Development Agency (AFD) with financial support from the Norway-led Central African Forests Initiative (CAFI), Lewis said. These groups argue that lifting the ban could aid social development in the region and make it easier to curb illegal and unregulated deforestation.

On top of this, the peatlands could also be affected by plans to construct hydroelectric dams in region, including the Grand Inga hydropower project. Such projects could divert water away from the wetlands, the study notes.

Overall, the peatlands face an immediate risk from deforestation and land-use change and a more long-term threat from climate change, Lewis said:

“The competing threats of direct land-use change and climate change are difficult to compare. The speed with which land can be converted is fast and can quickly kill large areas of swamp forest. But other areas would probably remain unaffected. The speed of climate change is slower than the movement of bulldozers, but could affect the entire peatland.”

To protect the peatlands in the short term, policymakers should consider introducing new environmental protections to the region, the authors wrote in their paper:

“Further research, therefore, needs to integrate knowledge from local communities, the natural sciences and social sciences, to develop a more holistic understanding of the Cuvette Centrale peatlands and facilitate local communities and their governments to manage and protect this globally significant region.”

However, protecting the peatlands from the threat of climate change will require a long-term “international effort,” Dargie said:

“With climate change, there is also the added complication that Republic of the Congo and DRC government policies and interventions alone will not be enough to avoid any negative impacts on the Congo Basin peatlands. That will require an international effort to reduce greenhouse gas emissions.”