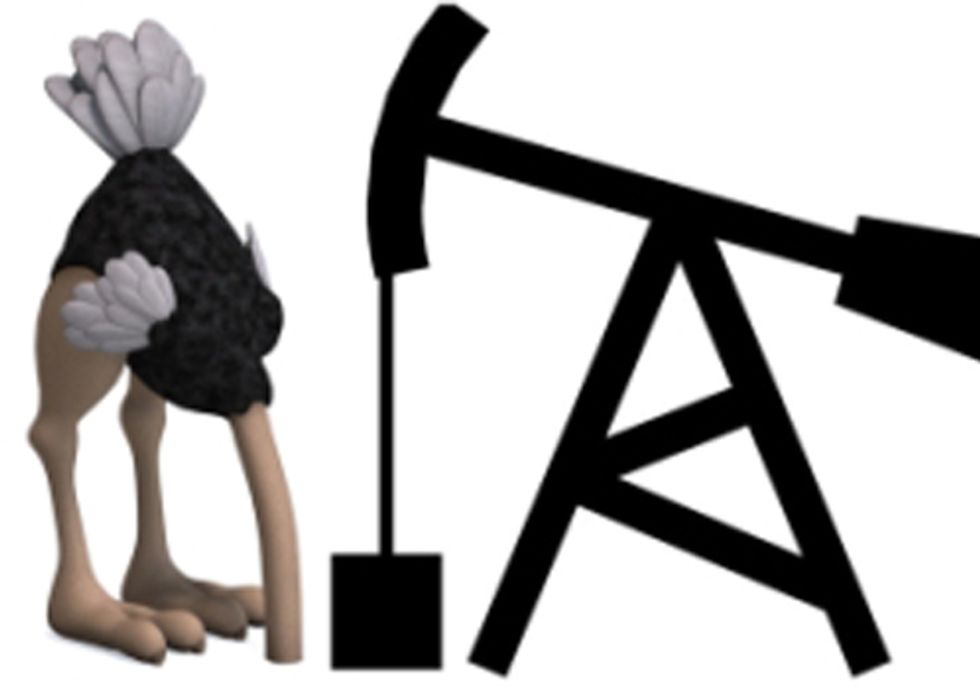 There is nothing but “Sad News for Peak Oil Disciples” these days, according to the Financial Post.

The latest example: Leonardo Maugeri, a fellow in the Geopolitics of Energy Project at the Kennedy School’s Belfer Center for Science and International Affairs—and a long-time critic of peak oil analysis—has just published a new report, Oil: The Next Revolution, in which he forecasts a sharp increase in world oil production capacity and the risk of an oil price collapse. His report has triggered a spate of press articles with titles like “No Peak Oil In Sight," "Potential U.S. Oil Boom Shakes Up Energy Politics,” and “Peak Oil Is Simply Not a Threat Anymore.”

These follow on the heels of a string of other articles touting increasing production of oil from “tight” shale deposits in the U.S.—pieces with titles like “Has Peak Oil Peaked?” and “Is ‘Peak Oil’ Idea Dead?” And those in turn ride the slipstream of Daniel Yergin’s widely feted book The Quest, which provided last year’s fodder for an anti-peak oil media frenzy.

The recent deluge of cornucopian triumphalism has provoked a few thoughtful responses, including, “Has Peak Oil Idea . . . Peaked?” and “Is Peak Oil Dead?”, both of which carefully sift the evidence and conclude that world oil production is better understood when viewed through the depletionist lens than through the rose-colored glasses of the peak oil naysayers.

No doubt peakists will continue to produce thoughtful, well-reasoned and fact-filled articles elucidating the precariousness of global energy supplies. Nevertheless, the sheer number and media prominence of “No Peak Oil” pieces (in the Wall Street Journal and New York Times, and even on NPR) is having an effect. Depletionist sites are seeing declining Web traffic. And while far more people now have heard of peak oil than was the case just a few years ago, many mistakenly believe that its core assertion has somehow been “debunked.”

Those of us who have been around this discussion for more than a decade—from the days when petroleum geologist Colin Campbell coined the phrase “peak oil,” and the movement consisted mostly of daily discussions on an obscure e-mail list-serve—have seen it grow into a social phenomenon of sorts, with books, newsletters, websites and organizations devoted both to analysis and citizen activism. Evidently growing public concern about the inevitable decline in world oil production has rankled some powerful people, who’ve been knotting their ropes in search of a bit of favorable data (declining oil prices, rising production) to use as the pretext for a public lynching.

The cornucopian mindset is certainly rife among leaders in the oil industry (Rex Tillerson, CEO of ExxonMobil, recently said of climate change and energy security, “We [humans] have spent our entire existence adapting. We’ll adapt ... it’s an engineering problem and there will be an engineering solution”). But a similar inability to imagine anything but happy endings is widespread also among many environmentalists, as I learned last weekend at the Aspen Environment Forum, where I debated Mark Lynas, author of Six Degrees and The God Species. While environmentalists are often accused of being alarmists, they can also evince a strain of can-do techno-optimism. Stewart Brand (founder of Whole Earth Catalog), who was another speaker at the conference, has morphed into a pro-nuclear, pro-geo-engineering, bright-green futurist. Jim Kunstler, likewise at Aspen, summed up his take on the event: “The techno-narcissism flowed like a melted Slurpee ...”

In the course of our debate, Lynas more than once cited a litany of failed forecasts from pessimists, starting of course with Malthus. Similarly, Daniel Yergin has scored points by claiming that prophecies of a peak in world oil production have proven wrong again and again for a century or more. It’s strange that the failed forecasts of optimists get comparatively little public attention, given that they are at least as numerous. The most relevant example: around 1998, when the modern peak oil discussion was just hatching, the International Energy Agency (IEA), the U.S. Department of Energy (DOE) and the U.S. Geological Survey (USGS) all issued forecasts that world oil production would grow steadily to achieve 120 million barrels per day by 2020, while prices would remain at the level of $20 per barrel (in 1998 dollars) even beyond that date. In 2004, when it was already clear that those forecasts had no chance of being realized, Daniel Yergin declared that oil prices would stay at $40 per barrel for the next 15 years. Neither the IEA, nor the DOE, nor the USGS, nor Daniel Yergin foresaw a situation in which crude oil production would flat-line for seven years beginning in 2005, or in which prices would whipsaw to record highs of up to $147 a barrel as they did in 2008. Yes, some of the peak oil forecasts for world oil production declines starting in 2005 or 2008 have proven premature, but it’s pretty obvious that the peakists had the more accurate and useful take on world petroleum prices and supply levels during the past decade. So it’s humanly understandable why resentment has been building among the Yergins and Maugeris of the world.

And so a spurt of new production from “tight” shale deposits now serves as a pretext to declare victory. The peaksters should have seen it coming, after all: high oil prices do indeed trigger increases in reserves and production from lower-quality resources. Indeed, some of the better analysts did see it coming. I recall Jeremy Gilbert, the former BP chief petroleum engineer, speaking about the potential of new production technology at an Association for the Study of Peak Oil (ASPO) conference a couple of years ago. “The current fields we are chasing we’ve known about for a long time in many cases,” he noted, “but they were too complex, too fractured, too difficult to chase. Now our technology and understanding [are] better, which is a good thing, because these difficult fields are all that we have left.”

The peak oil debate is not a sporting event. What matters is not which side wins, but what reality awaits us. Will we see a continuing plateau in global crude oil production? How long will it last? How big a proportional contribution to total liquids production will we see from tar sands, shale and other unconventionals? What will be the climate impact as the world’s petroleum supply is increasingly derived from lower-grade resources? And what will be the economic impact?

We at Post Carbon Institute hope to sort out some of the technical issues related to unconventional oil in a report (forthcoming in September) by David Hughes, a follow-up to his 2011 reality check on U.S. shale gas production. But the bigger environmental and economic questions will no doubt continue to generate uncertainties for some time.

Still, there are a few observations that no serious energy analyst can dispute. Oil exploration and production costs are skyrocketing (Bernstein Research estimates that this year the industry needs prices in the range of $100 a barrel to justify new projects). The super-giant oilfields that still account for 60 percent of world crude production are aging, and so the more modest contribution of unconventionals, which are expected to be both expensive and slow to come on line, must push against a tide of depletion and decline. It’s only a question of when the overall global production decline begins, not if. Meanwhile, some of the fuels (ethanol, natural gas liquids) counted by IEA and EIA in the “all liquids” category have significantly lower energy content per unit of volume than regular crude oil; thus an increase in barrels-per-day of “all liquids” does not necessarily mean an increase in the amount of energy delivered to society. Further, all the unconventional liquid fuels (including biofuels, tar sands and “tight” oil) offer a low energy return on the energy invested in producing them. Therefore, even if the number of barrels of liquid fuels delivered to market is still gradually increasing, the amount of useful net energy being made available by the petroleum and biofuels industries, when energy costs are accounted for, is probably already declining. And this is almost certainly true in the U.S.—the poster child for unconventional oil production. Finally, available global crude exports are declining rapidly as producing nations use more of their oil domestically—leaving less each year for importing nations like the U.S., Europe and China (this rate of decline is far greater than the relatively minor rate of increase in worldwide “all liquids” production).

Meanwhile, soaring oil prices and plummeting real energy yields from liquid fuels have already left economic carnage in their wake, as a fragile global financial system perched on a Matterhorn of debt has been dealt blow after blow by the failure of the real economy to expand as expected. It turns out that industrial production and global trade depend on energy, not just credit and confidence. June saw weaker oil prices—but this was due to an accelerating erosion of world economic strength (leading to expectations of falling oil demand), not to moderating petroleum production costs or substantially increasing production.

As many peakists have been saying all along, we’ll know for sure precisely when global oil production peaks (in terms of rate of production in barrels per day) only when we can see a steady decline in the rear-view mirror. But by then it will be too late for society to prepare for the economic impacts of peak oil. So is the peak oil “movement”—not as an exercise in analysis, but as an effort to warn the world and prevent catastrophe—doomed to failure? Maybe. But by the same token so is most of, if not the entire, environmental movement. We will not substantially change our collective behavior until crisis is upon us.

But even if we cannot avert a crisis, we can prepare some portion of the populace for the aftermath. We can build community resilience. We can seed the public conversation with information that will undermine the inevitable, reflexive effort to blame economic unraveling on handy scapegoats. Also, the future will be better if we protect at least some species, some habitat, some wild places, some water and some topsoil before the energy-led crash of the economy, so that we have an ecological basis for ongoing existence in the absence of cars, planes, iPads and cheap, abundant fuel.

In short, things will go better for us if we resist denial rather than engaging in it.