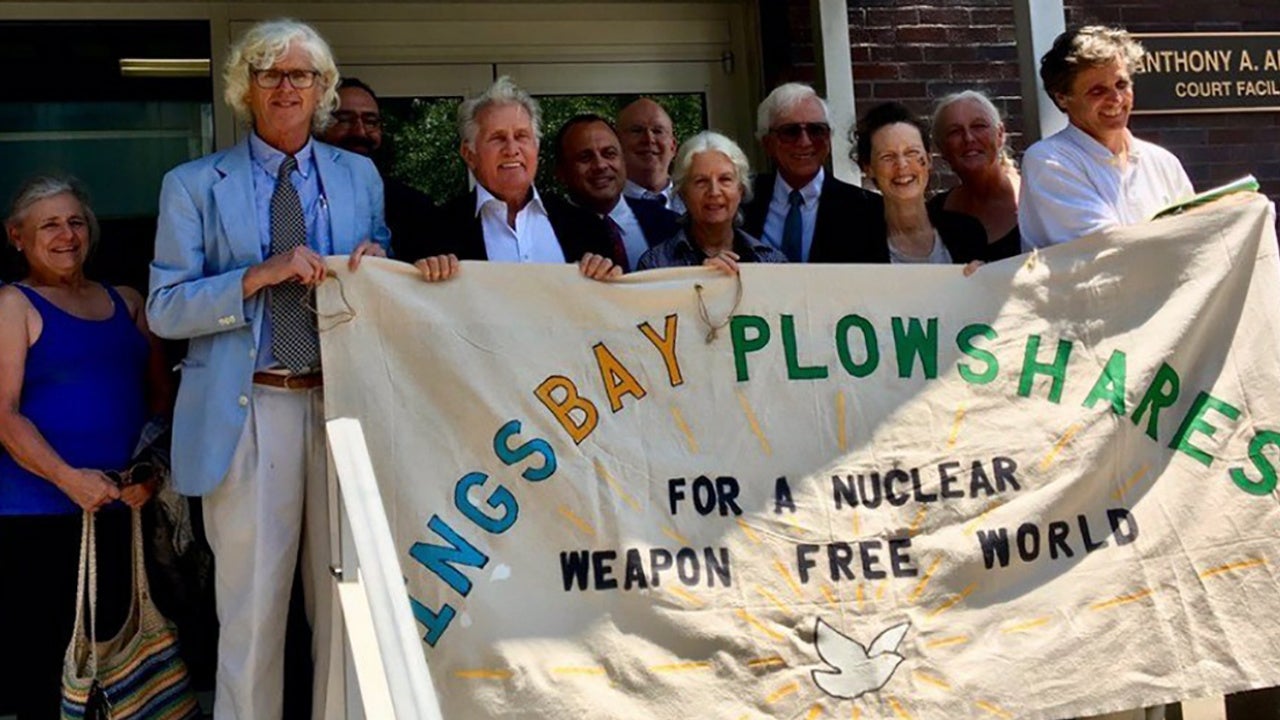 The Kings Bay Plowshares seven appeared with actor and supporter Martin Sheen last week after their arguments for dismissal of their federal charges were heard by a judge in Georgia. @kingsbayplow7 / Twitter

Advocates for seven faith-based peace activists are calling on the public to support the group as they fight federal charges and a potential 25-year prison sentence for disarming a nuclear submarine base.

The activists say they were acting in the name of their Catholic faith when they cut through fencing and wire at the submarine base and allegedly vandalized a building and static missiles.

“All of my actions and those of my co-defendants have been measured and guided by the principles of nonviolence expressed in Sacred Scripture. I would argue our communal criminal history has been all about upholding the basic tenets of love and providing for the common good,” said O’Neill in his oral argument. “My actions are an extension of my beliefs. This connection between sincerely held religious beliefs and sacramental practice (action) are one and the same.”

Under the RFRA, their lawyers argued, the government is required to take each of the defendants’ beliefs into consideration and to levy the least restrictive charge against the group possible.

“A prosecution on three felonies and a misdemeanor was not close to that standard,” argued attorney Stephanie McDonald, according to The Brunswick News in Brunswick, Georgia.

Colville said in his argument that the group doubts the government ever considered a punishment less restrictive than the felony and misdemeanor charges and the potential 25-year prison sentence the group now faces.

“Despite being given numerous opportunities, the government has yet to produce any evidence that it ever considered any less-restrictive means of protecting its so-called ‘compelling interest,’ while its own witnesses indicated that there were/are several such means available,” Colville said. “The question this begs, then, is: did the government consider something more restrictive, and then talk themselves down? To this? What exactly could that have been? Is there still some federal statute on the books that allows for a public flogging?”

The KBP7’s case marks the first time the RFRA has been invoked in this way.

In the courtroom last Wednesday, three of the defendants were seeing each other and the other advocates for the first time in 16 months after being incarcerated in a county jail in Georgia. Colville, Kelly and McAlister argue that their civil rights have been violated by their prolonged imprisonment, during which they have not had access to in-person legal preparation.

The courtroom last Wednesday overflowed with supporters, with about 60 people in the room as the KBP7 gave their arguments, and another 25 outside.

Actor and activist Martin Sheen was among the advocates who assembled in the court.

“I’ve been inspired most of my life by people who take the gospel seriously and live the gospel as a basic truth,” Sheen told The Brunswick News. “If what you believe doesn’t cost you anything, then what is it good for? I think that’s the fundamental value of the Plowshares’ action.”

Circulating their petition on social media after the hearing, the KBP7’s support committee called on the public not only to join their call for the government to dismiss their charges, but also to help rebuild the anti-nuclear weapons movement “that helped disarm the world’s nuclear arsenals from 90,000 down to 15,000 weapons in the 1980s.”

“We who share the moral vision of the Kings Bay Plowshares Seven proclaim our support for their courage and sustained sacrifice and call for the immediate dismissal of all charges against them,” reads the petition, addressed to Attorney General William Barr. “The defendants invite us to act creatively. They invite us to join global coalitions working to promote governments’ adherence to, and full implementation of, the Treaty on the Prohibition of Nuclear Weapons. They also invite us to participate in campaigns for divestment from nuclear weapons as complementary efforts towards the realization of a world free of nuclear weapons.”

A number of global peace advocates and Nobel Peace Laureates are among the signers of the petition, including Archbishop Desmond Tutu, Poor People’s Campaign leaders Rev. William Barber and Rev. Liz Theoharis and Medea Benjamin.