PBS Takes Us on a Terrifying 'Post-Apocalyptic' Tour Inside Fukushima 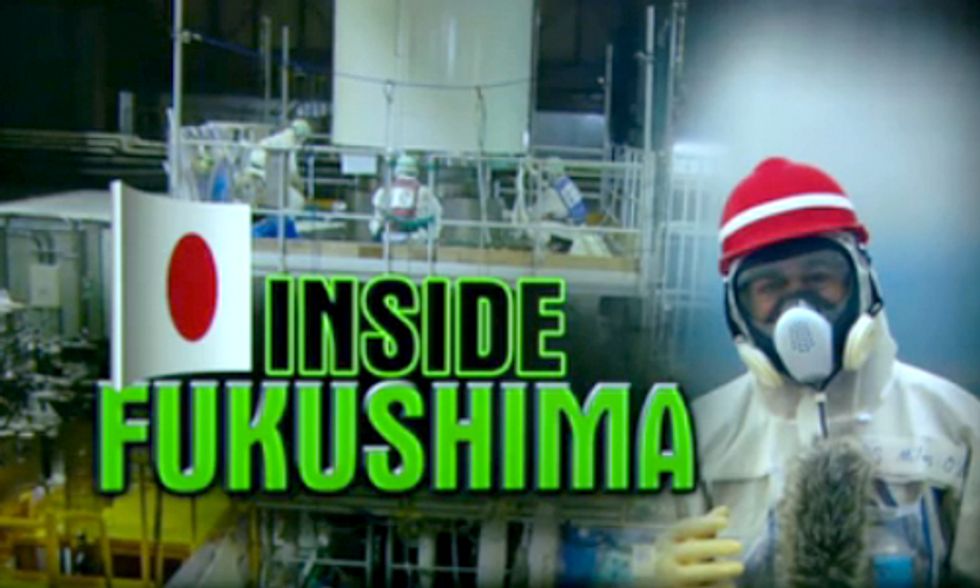 Nuclear opponents are often criticized for using the term "apocalypse" to describe the triple meltdown/quadruple-explosion/endless-radiation gusher reality at Fukushima.

But PBS has now penetrated where ordinary journalists may not tread—the interior of the most radioactive place on Earth. PBS reporter Miles O'Brien shows us for the first time some of the visual reality of what has actually happened to a six-reactor facility that has turned into a trillion-dollar catastrophe.

Or, as PBS puts it, the nuclear "apocalypse" along the coast of Japan, daily pouring 300 tons of lethal isotopes into our ocean eco-system. This brave and fascinating excursion into Fukushima's innards features footage of the infamous Unit Four spent fuel pool, where Tokyo Electric is trying to bring down extremely radioactive fuel rods whose potential killing power is essentially unfathomable.

Given the "State Secrets Act" banning Japan's citizens from criticizing the government, O'Brien's footage may be the last we see inside Fukushima for quite some time. Despite 150,000 signatures delivered to the United Nations asking for a global takeover, Fukushima's builders and mis-managers remain firmly in charge. In fact, the clean-up has become a major profit center for Tepco, which showed a multi-billion-dollar windfall in 2013 while putting the entire planet in peril.

One odd note: O'Brien shows footage of Lake Barrett, a former Nuclear Regulatory Commission functionary who was integral to the cover-up at Three Mile Island, where owners falsely denied for years that any fuel had melted. Barrett advocates dumping Fukushima's tritium-laden water directly into the Pacific Ocean. Will he also pop up at nuclear power's next "post-apocalyptic" nightmare?