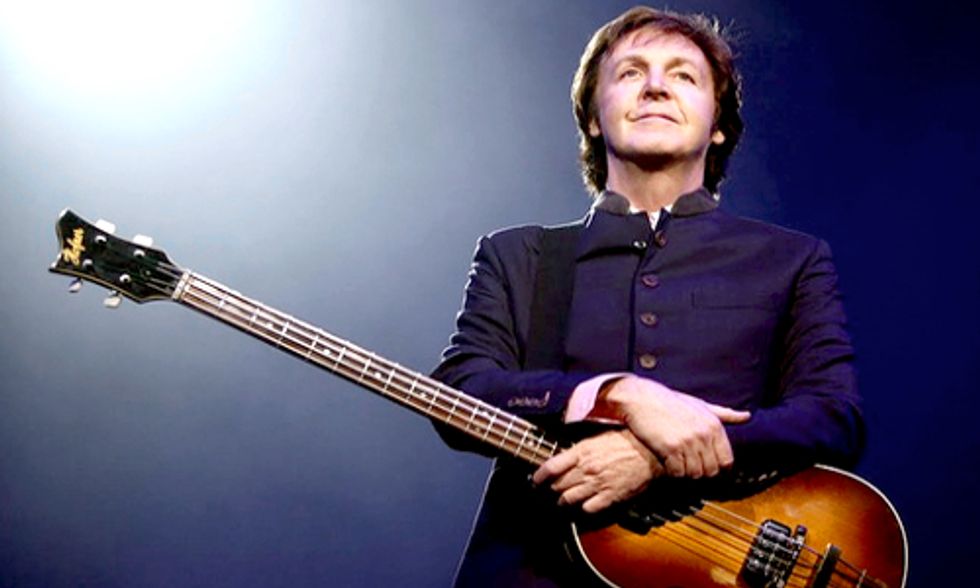 Today, Sir Paul McCartney published a personal letter on his blog addressed to Russian President Vladimir Putin in which the ex-Beatle called for the release of the Arctic 30. The Arctic 30—made up of 28 Greenpeace International campaigners and two freelance journalists—were arrested eight weeks ago following a peaceful protest against Arctic oil drilling.

In his letter, Sir Paul makes a lyrical appeal for the release of the Arctic 30 who remain in detention in St Petersburg, facing charges of piracy and hooliganism, after the demonstration at a Gazprom oil platform in the Pechora Sea. Gazprom plans to start production in the first quarter of 2014 in an area of the Russian Arctic shelf that contains three nature reserves that are protected by law. If the 30 are convicted, the offense of piracy carries a maximum 15 year jail term.

Sir Paul McCartney is friendly with President Putin and hugely popular in Russia.

Sir Paul, who has previously taken tea with Putin in the Kremlin, wrote in his letter:

Forty-five years ago I wrote a song about Russia for the White Album, back when it wasn’t fashionable for English people to say nice things about your country. That song had one of my favorite Beatles lines in it: “Been away so long I hardly knew the place, gee it’s good to be back home.” Could you make that come true for the Greenpeace prisoners?

“Sir Paul’s letter is an extraordinary and beautiful plea for justice from one of the twentieth century’s most famous icons, and it went straight into the inbox of President Putin himself," said Greenpeace International Director, Kumi Naidoo. "We know some of the Arctic 30 are able to listen to the radio in their cells, and some of them are no doubt Beatles fans, so this news would be music to their ears"

The press release notes that McCartney is hugely popular in Russia—and also with Putin himself. In 2003 he performed to more than 100,000 people including Putin in Moscow’s Red Square. Before that concert, Sir Paul was given a personal guided tour of the Kremlin by Putin, who was reported as telling him, "You are loved here [in Russia].” The pair are on a first-name-basis, as Sir Paul’s letter revealed:

Vladimir, millions of people in dozens of countries would be hugely grateful if you were to intervene to bring about an end to this affair. I understand of course that the Russian courts and the Russian Presidency are separate. Nevertheless I wonder if you may be able to use whatever influence you have to reunite the detainees with their families?

Gazprom and Royal Dutch Shell share a joint venture to drill for oil in the area, though in a recent press statement Shell said they had "zero-point-zero percent to do with the situation in Russia." Greenpeace compiled a list of reasons why they are 100 percent involved in the detention of peaceful protestors, including:

As a key financial partner, Shell could use its influence to help secure the release of the peaceful activists, but instead, it has remained silent on the matter. By continuing this silence, Shell is complicit in the detention of the Arctic 30, according to Greenpeace.

With the Russian court set to decide on Nov. 17 whether it will release the Arctic 30 or extend their pre-trial detention, Greenpeace is sponsoring a global day of action, Sat., Nov. 16. In the UK, participants will visit Shell petrol stations, demanding that they speak out against the detention of the Arctic 30.

Since the Arctic Sunrise was seized eight weeks ago, there has been an outpouring of support from across the world for the Arctic 30. World leaders including Brazilian President Dilma Roussef, German Chancellor Angela Merkel and British Prime Minister David Cameron have expressed their concern for the fate of the prisoners and thirteen Nobel Peace Prize winners including Archbishop Desmond Tutu, Aung San Suu Kyi and Lech Walesa have also spoken out, according to Greenpeace.

More than 2 million people have sent letters and emails in support of the Arctic 30, and banners have been hung from Mount Everest to the Eiffel Tower.