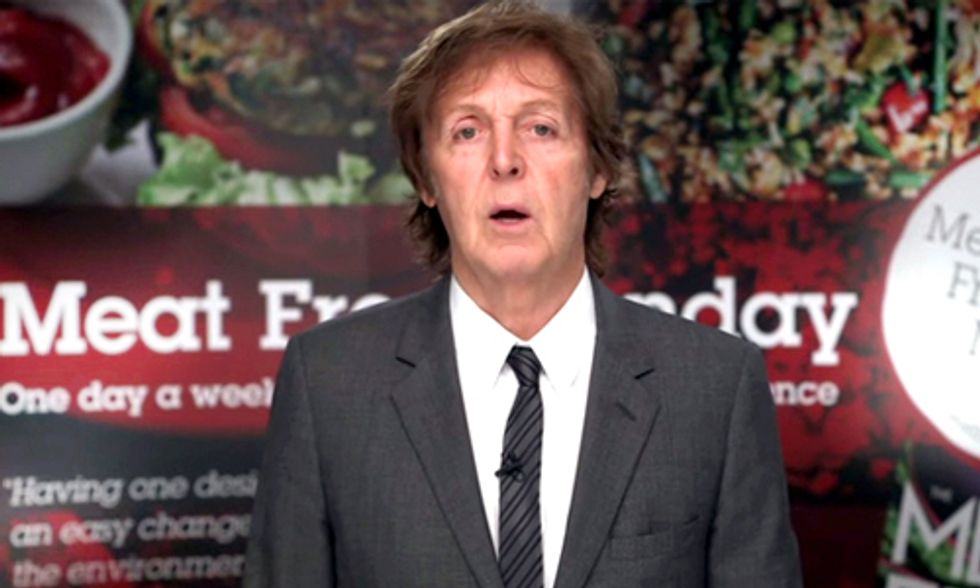 "Meatless Monday is a national and international campaign that encourages people to enjoy meat-free meals on Mondays to improve their personal and public health, animal welfare, wildlife protection and environmental and agricultural sustainability," according to the Center for Biological Diversity, a nonprofit dedicated to protecting Earth's species and their habitats. Going meat-free even one day a week can significantly reduce your environmental impact and improve your overall health.

Paul McCartney encourages people all over the world to go meatless at least one day a week with his Meat-Free Mondays campaign.

That's why New York City Council members Helen Rosenthal and Corey Johnson have introduced a resolution to make meat-free options more widely available and encourage New Yorkers to skip meat on Mondays. About 40 schools in New York City already participate in Meatless Monday, including private, public and charter schools at all grade levels. Many New York City colleges and universities participate in Meatless Monday, as well. And even conscientious restaurant owners, such as Bill Telepan, Mario Batali, John Fraser and Marisa May, promote their meatless options to customers on Mondays. The measure would not force the city's restaurants and schools to go meatless, but rather it would promote meat-free options.

Council Member Corey Johnson said, "We’re issuing a call to all New Yorkers: Let’s go meatless on Mondays. By doing so, we’re not only helping the planet, but ourselves." He said, "Studies have shown that red meat in particular has a carbon footprint similar to automobiles. And if New Yorkers cut out meat just one day of the week, we could potentially make a dent in rates of obesity, cancer and diabetes.”

The resolution has a lot of support. The Center for Biological Diversity has been encouraging people to eat less meat with their campaign Take Extinction Off Your Plate, which raises awareness about the environmental impact of meat production. Paul, Mary and Stella McCartney, founders of Meat Free Monday, are thrilled: “Great to hear that New York City officials are considering introducing Meatless Monday. It’s such an easy and enjoyable way to reduce our carbon footprint and improve our health.” Erica Meier, executive director at Compassion Over Killing also supports the resolution. “By introducing this Meatless Monday resolution, the New York City Council is sending a powerful message about the benefits of eating more fruits and vegetables, and of course, eating fewer animals,” she said.

New York City is not the first city in the U.S. to adopt a Meatless Monday Resolution—Los Angeles, Philadelphia and Washington DC and more than 30 other cities have already adopted resolutions. But if the city council approves the resolution, there could be millions more people in America's largest city going meat-free on Mondays.