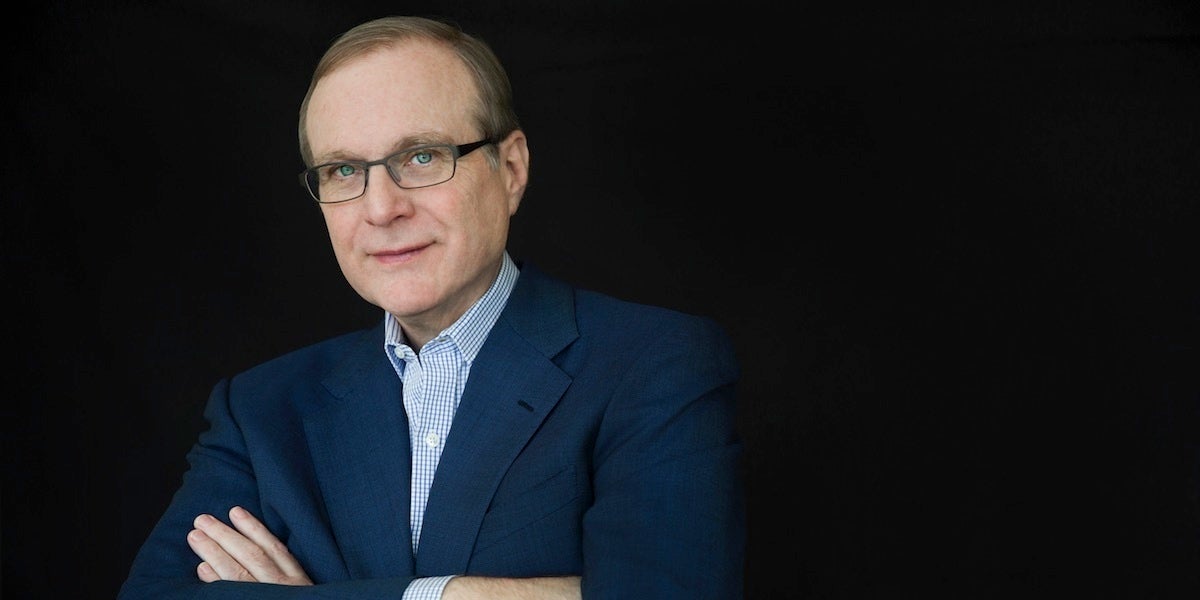 The world lost an
important environmental icon on Monday with the passing of Paul G. Allen. He died from complications of non-Hodgkin’s lymphoma in Seattle, according to his company Vulcan Inc. He was 65.

Allen, who co-founded Microsoft with his childhood friend Bill Gates and owned the Seattle Seahawks and Portland Trail Blazers, was also a major philanthropist devoted to making the world a better place.

“Sad to hear of the passing of Paul Allen, who was a strong advocate for environmental protection,” DiCaprio tweeted. “He and the team at Vulcan played a pivotal role in developing the
Shark Conservation Fund alongside [the
Leonardo DiCaprio Foundation]. His legacy lives on via his incredible work as a philanthropist and investor.”

His
Global FinPrint initiative was introduced in 2015 to assess the planet’s diminishing number of sharks and rays and to aid management and conservation efforts for marine life.

Captain Paul Watson, the founder of the Sea Shepherd Conservation Society, said Allen was a “great force for marine conservation” and noted that Vulcan co-produced their 2018 high-seas documentary Chasing The Thunder.

Erik Solheim, head of the United Nations Environment Programme, also said Allen will be sorely missed but his legacy will continue.

“We will remember Paul Allen as a champion and supporter of wildlife, conservation and the environment,” Solheim
tweeted on Tuesday. “He and Vulcan Inc. were instrumental in hugely impactful work on everything from elephants to sharks.”

Allen’s lifetime of philanthropic giving to science, technology, education, conservation, the arts and community improvement totaled more than $2 billion, according to the
Allen Institute.

He was among the list of the world’s leading philanthropists who pledged to give away the bulk of their fortunes to charity.

“Those fortunate to achieve great wealth should put it to work for the good of humanity,” Allen wrote several years ago after announcing that he was donating most of his fortune to charity, the Associated Press reported.

The pledge “reminds us all that our net worth is ultimately defined not by dollars but rather by how well we serve others.”

Vulcan CEO Bill Hilf said in a
press release that “millions of people were touched by his generosity, his persistence in pursuit of a better world, and his drive to accomplish as much as he could with the time and resources at his disposal.”

Allen, his team and his conservation partners helped launch the Great Elephant Census in 2013 to count Africa’s savanna elephants.

“Our goal was to learn how many remain and where, then use the information to help protect these iconic animals from the poachers that are driving them toward extinction,” Allen
wrote in 2016.

The census showed that elephant populations in 18 countries declined by 30 percent.

Earlier this month, Allen
announced that the non-Hodgkin’s lymphoma he battled in 2009 had returned and he planned to fight it.

“I’ve begun treatment and my doctors are optimistic that I will see a good result. Appreciate the support I’ve received and count on it as I fight this challenge,” he tweeted.

“My brother was a remarkable individual on every level. While most knew Paul Allen as a technologist and philanthropist, for us he was a much loved brother and uncle, and an exceptional friend.

Paul’s family and friends were blessed to experience his wit, warmth, his generosity and deep concern. For all the demands on his schedule, there was always time for family and friends. At this time of loss and grief for us—and so many others—we are profoundly grateful for the care and concern he demonstrated every day.”