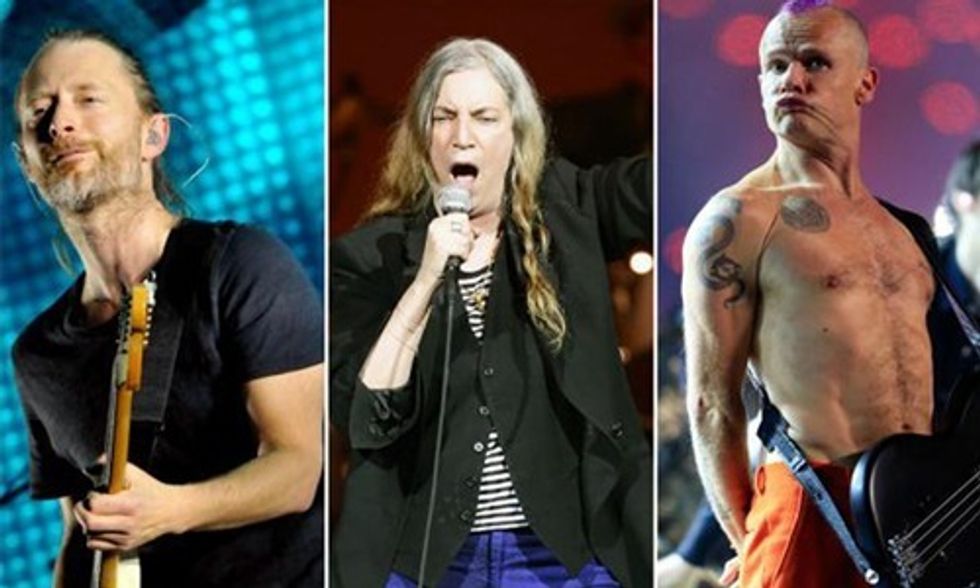 We’re thrilled that our friends over at the “Pathway to Paris” initiative just announced an amazing concert that they’re throwing in Paris during the COP21 Climate Talks this December to benefit 350.org. The concert will feature musical acts like Thom Yorke, Patti Smith, Flea, Dhani Harrison, Tenzin Choegyal, Jesse Paris Smith and Rebecca Foon. And it will include some incredible speakers, like our very own Bill McKibben, Naomi Klein, Vandana Shiva and others.

We couldn’t be more ready to rock. Music has always been a critical part of 350.org, from the songs that we sang around the world during our first major day of action back in 2009, to the chants that we’ve shouted out in the streets of New York (and a thousand other cities) during the People’s Climate March last year. As we gear up for a busy few months of action around the Paris Climate Talks, we’re thrilled to have the partnership of some of these incredible musicians to drive us forward.

The whole thing is thanks to our friends at Pathway to Paris, an initiative in partnership with 350.org that brings together musicians, artists, activists, academics, politicians and innovators to participate in a series of events and dialogues to help raise consciousness around the urgency of climate action and the importance of establishing an ambitious, global, legally binding agreement at the UN Climate Change Conference in Paris in December 2015.

Co-founded by musician-activist-organizers Jesse Paris Smith and Rebecca Foon, Pathway to Paris kicked off with an intimate evening of music and speakers at Le Poisson Rouge immediately following the People’s Climate March in New York City in September 2014, with a series of similar events unfolding in New York and Montreal over the ensuing year. The final Pathway to Paris concert will take place Dec. 4 in Paris at Le Trianon.

All participants donate their time, skills and talents; while the primary aim of P2P is consciousness-raising and call-to-action, the events also raise funds, with all proceeds going to 350.org. Pathway to Paris is a collaboration with 350.org, with support and sponsorship from Tree Laboratory, Sustainability Solutions Group, Modo Yoga NYC and The Flux.

If you’re in Paris, make sure to keep an eye on the Pathway to Paris website to learn more about how you can get your tickets to the show. And for all of you who can’t make it in person, we’ll be setting up a live stream so you can watch from anywhere in the world. Rock on.