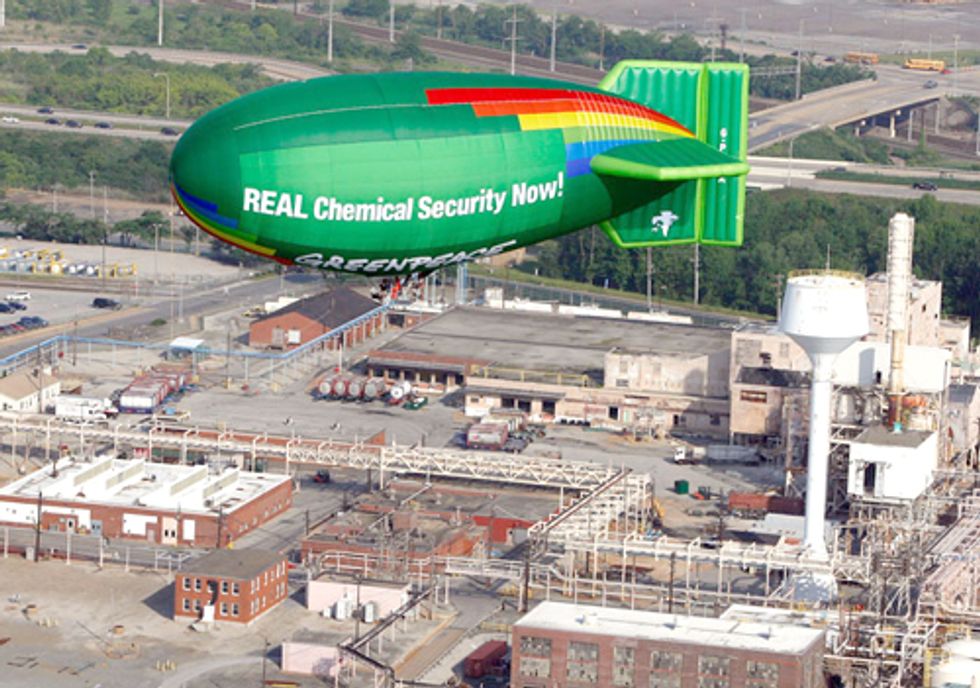 Greenpeace ridiculed Republican hearings about the Department of Homeland Security (DHS) as “partisan nit-picking” as Greenpeace legislative director Rick Hind said, “Only in Washington, can you hear people say, ‘this program isn’t working,’ so let’s extend it until 2018.” Following a Fox News report on an internal DHS memo, House Republicans held another hearing March 6 on the DHS’s Chemical Facilities Anti-Terrorism Standards (CFATS).

“Instead of fixing a fatally flawed law written by Republicans and industry lobbyists in 2006, congressional Republicans are engaging in partisan nit-picking about predictable failures in CFATS that the DHS first identified,” said Hind.  Meanwhile, according to U.S. Environmental Protection Agency (EPA) data, more than 110 million Americans remain at risk from high risk chemical plants. “These hearings are a dangerous distraction from DHS’s prudent legislative proposals which would strengthen CFATS to provide real protection for millions of people living down wind of high risk chemical plants,” said Hind.

Since 2009 the DHS has asked Congress for authority to eliminate catastrophic chemical plant hazards and close major security gaps in CFATS that exempt thousands of chemical facilities (see examples below).

In 2006, Congress passed a temporary 744 word “rider” to the Homeland Security Appropriations Act to allow Congress more time to enact a comprehensive program. In 2009 the House passed a comprehensive bill (H.R. 2868) but it was blocked in the Senate. Ironically, in 2009, Dow Chemical also proposed legislative language to conditionally require high risk plants to use safer cost-effective processes. The current House Republican bills (H.R. 901 & H.R. 908) would lock in all security gaps and loopholes in CFATS for another 7 years.

Instead of waiting for Congress to act, more than 100 organizations are urging President Obama to use his authority under the Clean Air Act to reduce these risks. This was proposed by the Bush EPA in 2002 but it was never implemented. “We can no longer afford to wait for Congress to act responsibly,” concluded Hind.