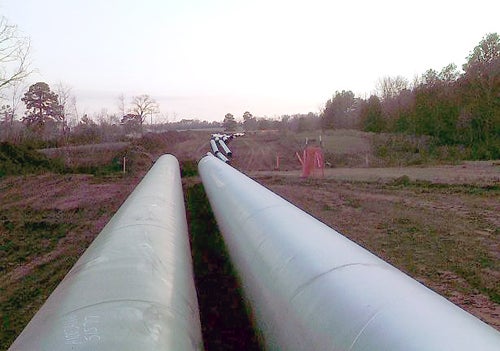 [Editor’s note: Thanks to Michael Bishop for providing EcoWatch this firsthand account of what happens when a company like TransCanada claims eminent domain on one’s property and begins building a tar sands pipeline—the southern leg of the Keystone XL. Unfortunately, this is one of many examples of corporations putting profits before human health and the environment in pursuit of extreme fossil fuel extraction. The good news is that people like Michael Bishop are fighting back. This is the fourth of a four-part series. Read Part I, Part II and Part III.]

Dogs are territorial and bark at the wind blowing, leaves moving, sounds miles away, strange vehicles and people coming onto your property. I don’t care where you live in the world. That is their nature. My dogs are scared to death of these giant machines and bark every time the workers crank up. It is a constant “parade” of TransCanada’s vehicles up and down the line. The construction of Keystone XL is only 120 feet from my house and aside from the rumbling and noise from the engines, the dogs barking for almost 10 hours per day is irritating, to say the least. 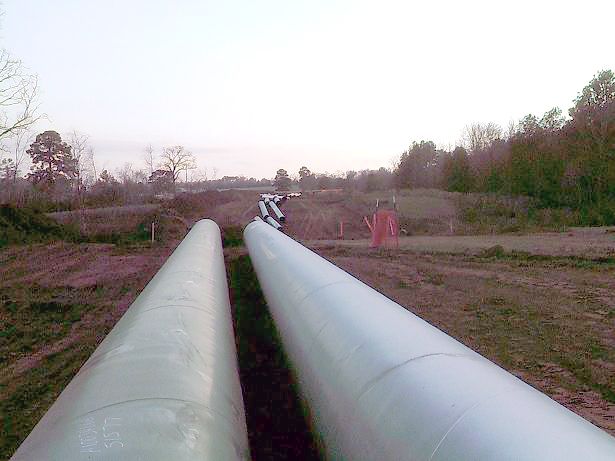 TransCanada’s pipe on the ground prior to their excavation. It is looking south, across the creek and into what once was the back pasture. 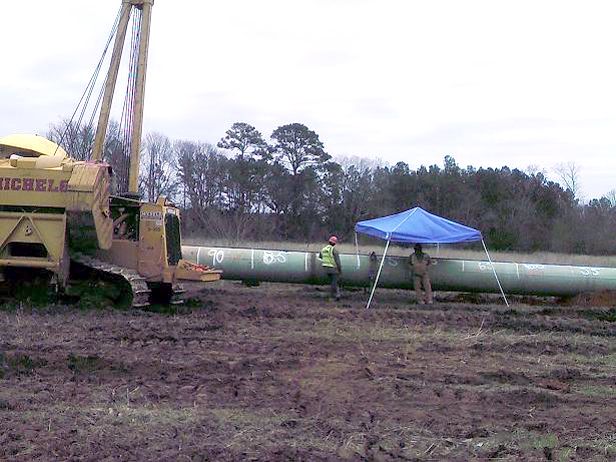 TransCanada crews welding the pipe for the crews to begin laying. 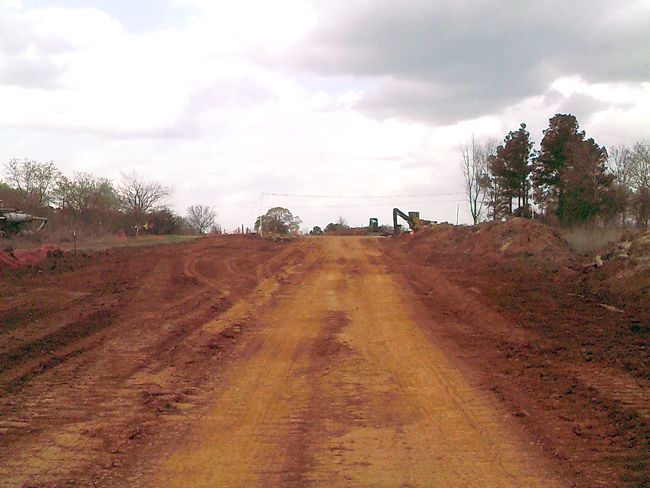 Looking north on the property towards the county road. This site is the location of the sunflowers grown for biodiesel.

Recently, two of my grandchildren, who are used to playing anywhere in the front they want, wandered into the work area, which caused my heart to drop. I’m telling you, these people don’t care about anyone or anything now, but by God, they will.

I came to East Texas nearly 30 years ago after spending all of my teen years and most of my adult life along the Houston Ship Channel, working in the oil refineries and chemical plants. I see beauty everywhere but I really like East Texas in the springtime. I bought this property to leave to my children and grandchildren—a legacy, if you will. With my sons, and now my daughter, I have done my best to instill in them the responsibility of stewardship and how to properly take care of Earth and its creatures. I went outside to check the fruit trees in my orchard last week and, as I have for 30 years, marveled at the beauty of the blossoms on the pear, cherry, apple and peach trees. I also had tears in my eyes, because only a few feet away is the pipeline that is going to carry some of the most toxic material found on Earth. 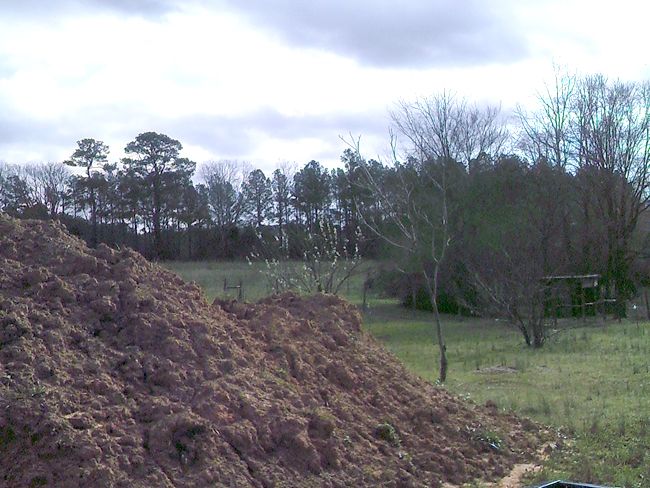 Fruit trees in bloom a few feet from TransCanada’s construction. 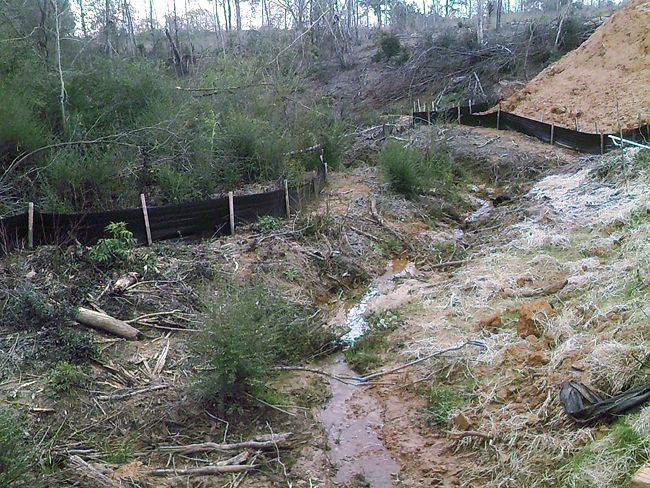 This is a natural spring on my property they covered up.

I take great pride, as a biologist and self-proclaimed naturalist, in the native plants I have protected and nurtured for more than 20 years. My wild irises, which are phenomenal, have been buried by TransCanada’s excavator and although they will live, it will be another year before they bloom again. It is all so sad and shameful that I am at a loss for words, to be quite honest. It’s profits over everything else, especially Constitutional rights.

This pipeline is being built despite massive protests and lawsuits by honest, hardworking landowners and concerned U.S. citizens. In retrospect, I should have ignored my lawyer and the lawyer for the Texas Veterans Land Board, stood my ground and never settled. I was in a situation where my back was up against the wall, with a wife who has Alzheimer’s and a teen-aged daughter, and the attorneys involved led me to believe I had no choice but to settle. Hindsight is always 20/20, but looking forward, the facts in my lawsuits are irrefutable.

I claim, in my suit against TransCanada, that they have defrauded the American public, misled Texas landowners and have no right to eminent domain based on the material they are transporting. What I find extremely sad and unbelievable is that once members of the public became aware of this company’s deceit and contacted the appropriate legislators and regulatory authorities, no corrective action was performed. The Texas legislature did not call for an investigation into this matter and the Texas Railroad Commission (the pipeline operator permitting agency) turned a deaf ear to this problem. I use the word “problem” because it is a “problem,” not an “issue.” Where are all the people who took sacred oaths to protect the public?

TransCanada, in my hearings, repeatedly referred to “bitumen” (tar sands oil) as heavy crude oil that has been “diluted.” This is in the court transcript. I presented overwhelming evidence, using both federal and Texas statutory definitions, that dispel that claim, including irrefutable evidence from the U.S. Geological Survey and even the Canadian government itself. Remarkably, I have TransCanada’s own website admission. Public relations pamphlets sent to residents along the pipeline path also admit to it being “bitumen.” But the judge in my case was not interested in hearing the truth.

If the permit issued to TransCanada by the Texas Railroad Commission states that the “material to be transported” is crude oil, but it doesn’t meet the federal or state legal definitions for crude oil, then what is it exactly? In the Final Environmental Impact Statement to the U.S. Department of State, it says the material is: diluted bitumen, synthetic crude, synthetic bitumen, raw bitumen and diluted synthetic bitumen. Beware a “bait and switch” to further confuse and mislead the public in this matter. I am not buying it and neither should you. TransCanada’s lawyers can distort the facts all they want, but we see through their lies and smoke and mirrors. What I want to know is why President Obama, my elected officials, our regulatory agencies and the courts have all sided with this foreign energy company over the American people?

I have filed suit in Nacogdoches County Court At Law, which was dismissed by the judge for “lack of jurisdiction,” but is now on appeal in the Texas 12th Court of Appeals in Tyler, Texas. I have also filed suit against the Texas Railroad Commission, which was also dismissed by the judge for “improper service,” in spite of the fact that I followed the law to the letter. I am re-serving that suit on the elected officials in that agency and they will answer to the people before this is over.

I am also preparing a lawsuit against the U.S. Army Corps of Engineers in Federal Court, Eastern District of Texas in Lufkin, where I feel good about my chances. Again, the facts are irrefutable and I think federal judges are isolated from the lobbying efforts, bully tactics and possibly even bribery being employed by TransCanada. As I wrap up my story, I want to leave you with a few final points to consider.

We must decide now, as a people, if private property rights and sovereignty of U.S. citizens are to be sacrificed for the bottom line economic interests of foreign private corporations that want to send their toxic materials to Gulf Coast refineries for export. The export fact is indisputable and even the President of the U.S. has admitted this in public statements. My land and my life’s dreams have been destroyed, and for what? To line the pockets of a private company and provide fuel to China and India? This is not justice and our elected officials in the state of Texas have turned a deaf ear to our cries.

What is one to think other than that they have been paid off, are inherently ignorant or just don’t care and have their eyes on higher office? My focus will be shifting to the Texas legislature next, as this madness has to stop. There was a time in Texas, and in other states, when eminent domain and the “taking of property” was done for “public use or public need and necessity.” In the global economy, it seems those days are over.

I also want to clear up the myth that the Keystone XL will help America secure our “energy independence” so we can stop “importing foreign oil” from Saudi Arabia. This is pure fantasy. First of all, Keystone XL is being built as an export pipeline, not to make America more energy independent. Second, one of the Gulf Coast refineries that is slated to process TransCanada’s tar sands bitumen is Saudi Arabian. Motiva is a joint venture between Saudi Arabian Refining and Royal Dutch Shell. Do you see the irony here? Follow the corporate trail with others, like ExxonMobil and Chevron. It will boggle your mind where and why these companies get their oil. Keystone XL isn’t about reducing our dependence on foreign oil, it’s about using America as a sacrifice zone to get Canadian oil to foreign markets.

In this global context, there is no “public interest,” there is only private corporate gain. In spite of lawsuits and overwhelming evidence to support this fact, politicians and bureaucrats, from the President on down, ignore the law and side with these corporate monsters.

I think what pisses me off more than anything is that we have a Congress that will spend trillions of dollars bailing out Wall Street, but turns a deaf ear to people like us who are fighting for basic property rights and for the future safety and health of our children and grandchildren.

I have hit many brick walls during this journey, and I am sick of hearing lawyers tell me it “can’t be done.” There is a Chinese Proverb, which I hung on my laboratory wall for inspiration when I was doing R&D on renewable fuels:

THE PERSON WHO SAYS IT CANNOT BE DONE SHOULD NOT INTERRUPT THE PERSON DOING IT.

The legal war is on and I am enlisting peaceful warriors to join me in this fight. My friends and family have started a website and formed a non-profit corporation to help all landowners in the U.S. legally fight this powerful oil and gas company.

I especially want to thank Stefanie Spear of EcoWatch, Tom Weis of Climate Crisis Solutions, Chris Wynnyk Wilson from Austin, Julie Dermansky from New Orleans and the wonderful young men and women of the Tar Sands Blockade for their support and for maintaining faith in my legal battles against this tyranny. Losing is not an option.