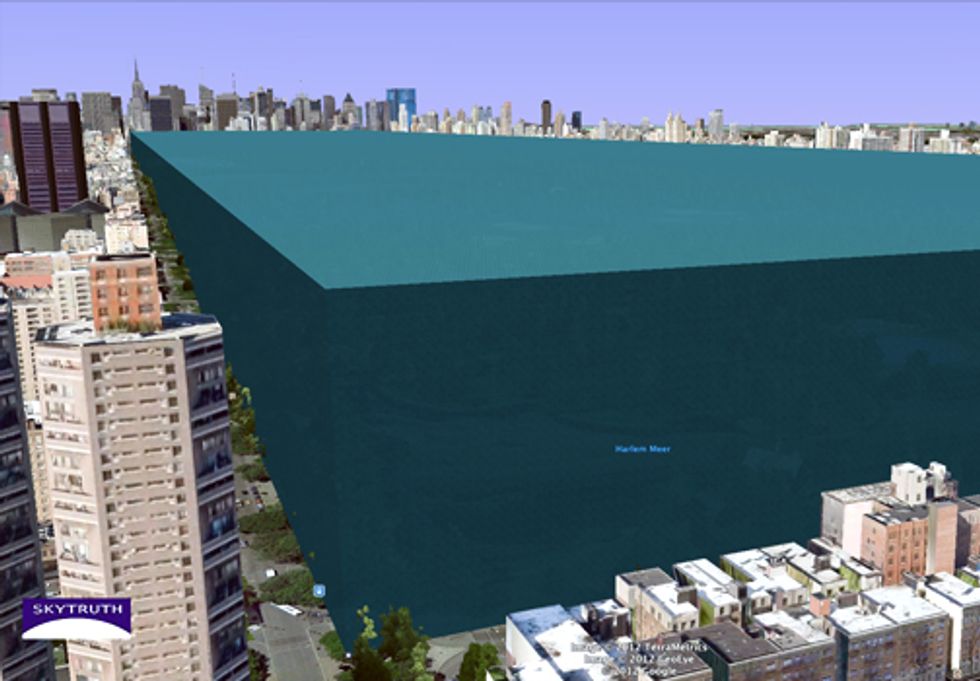 Earlier this week, we posted a report on the quantity of water that has reportedly been used in the U.S. for hydraulic fracturing in the last 20 months. The staggering number, 65.9 billion gallons, was translated into the number of hours it would take for all of that water to flow over Niagara Falls (it was about 24.5 hours in case you wondered). However, with a lot of attention on New York State’s pending decision on fracking, and the drinking water supply for 9 million people in jeopardy, the staff at SkyTruth thought it would be a good idea to create a visual a little more familiar to the residents of the Big Apple.

Consider Central Park. Among the winding paths that twist through the 843-acre green-space, you find a number of lakes and ponds, the largest of which is the Jacqueline Kennedy Onassis (JKO) Reservoir. We thought about trying to use this lake to represent how much water has been used nation-wide, but the JKO reservoir barely holds 28.5 million gallons, and we need to represent more than 200 times that amount.

To reasonably do this, we need to change our units of measurement to something better suited to massive quantities of water. The volume of most lakes is measured in acre-feet, or the amount of water it takes to cover an acre of land with one foot of water, and this will work quite well for our purposes. To make the conversion as simple as possible, this chart will give you a few examples:

At 202,238 acre-feet, all we have to do now is divide the number of acre-feet by the area of the park, and we find it covers the park in 239.9 feet of water! However, Central Park is not a smooth surface and all of the hilltops and valleys make modeling this a little challenging. I recorded more than 60 elevations from around the park and averaged them to find the base elevation of the park to work with. Then, in Google SketchUp, I added a 3D box around the entire park, raising the top to 240 feet above the mean elevation of the park—and the resulting images were even more staggering than I expected.

From the corner of 5th Avenue and W. 58th Street, the mere corner of our 3D pool of frackwater dominates the luxurious Plaza Hotel, and dwarfs the Apple Store’s futuristic glass cube on the lower right of the image. Remember, most of the water used in fracking is laced with toxic (and quite often secret) chemicals and some of this water remains deep underground after the initial frack (the percentage varies from 20-90 percent, depending on geology and the audience) or is disposed of in deep injection wells. Through high-volume slick-water hydraulic fracturing, a significant amount of water is being taken out of the hydrological cycle.

Image 2: Looking south from Harlem toward to Midtown Manhattan.

Some details and caveats to consider regarding this graphic:

Because of this, we can only definitively say that at least this much water was used in hydraulic fracturing between January 2011 and August 2012. Our knowledge is limited to what was reported, but while we know that some water was reused, we have not been able to tell how much (at least not yet, stay tuned to our blog, we may work this number out eventually) because of inconsistencies in reporting practices. We believe that much more activity has occurred than has been reported, making our estimate still very conservative - even with enough water to drown Central Park in 240 feet of chemical-laden brine.

Image 3: Looking east across the JKO Reservoir, from inside the 3D model.

SkyTruth believes that analyzable data about the cumulative impacts of fracking needs to be available to the public. However, the terms of use and the interface our  source uses is restrictive, and SkyTruth believes its developer's intentional lack of functionality does not live up to the spirit of open information and disclosure that is necessary so that research can be conducted and the public can be truly informed about fracking.

If you have Google Earth and want take a 3D tour, download the model here. Find a compelling visual? Take a screenshot and share it on our Facebook wall, tweet it #66billion, #SkyTruth or email us at [email protected].