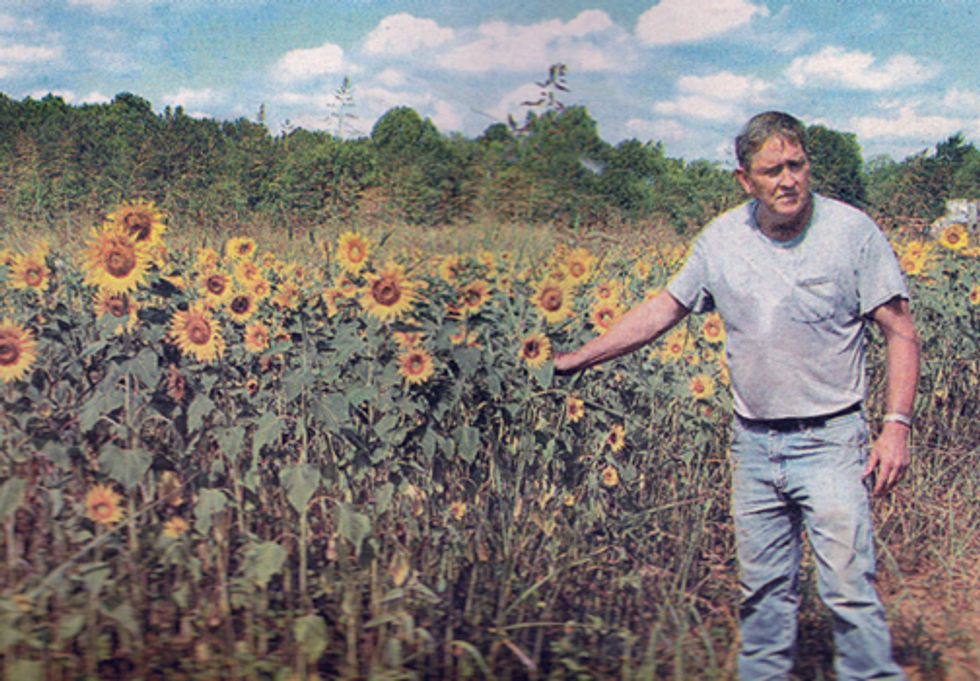 [Editor's note: Thanks to Michael Bishop for providing EcoWatch this firsthand account of what happens when a company like TransCanada claims eminent domain on one's property and begins building a tar sands pipeline—the southern leg of the Keystone XL. Unfortunately, this is one of many examples of corporations putting profits before human health and the environment in pursuit of extreme fossil fuel extraction. The good news is that people like Michael Bishop are fighting back. This is the second of a four-part series. Read Part I, Part III and Part IV.]

I served honorably in the U.S. Marine Corps and have never been known to back down from a fight. In June of 2010, I received a phone call from the TransCanada Pipeline representative who informed me that he was at the front of my property with a deputy sheriff and the TransCanada attorney. I went up there, recognized the deputy and asked him "what in the hell was going on?" He told me that he was off-duty and being paid by TransCanada to ensure that "I didn't do anything violent" and introduced me to the attorney, who promptly served me with a Temporary Restraining Order. It was signed by Judge Sinz of the Nacogdoches County Court at Law, ordering me to let their people on the property to conduct their business ancillary to their right of eminent domain. The fight was on. I immediately called the court and told the clerk that this order was ex parte and that I had no say in the matter, and that my side of the story needed to be told. She spoke to the judge who ordered an emergency hearing an hour from the call.

At the hearing, the judge informed me that TransCanada had the right of eminent domain under the law and that this matter was actually out of his hands but he would hear my argument. I informed the judge that a suitable, alternative route had been offered to them and that in the first place, the citizens of Texas passed a Constitutional amendment in 2009 during the gubernatorial election which prohibited the taking of property for "private use." I reminded the judge that my property can only be taken for "public use" and not for private economic gain. I let him know that this was a private, foreign corporation transporting oil to another private, foreign corporation and that this entire process was illegal.

The judge ignored these facts. He did ask TransCanada why they could not utilize the alternative route that I had offered and they explained that my neighbor's "lake" was in the way and that it would "be too expensive to bore under it." I laughed and asked the judge if that were true, why is it that TransCanada can bore under seven major rivers in the state to run this pipeline and cross over hundreds, if not thousands of creeks and streams? I lost the fight but it angered me to action.

This is a picture of me in my front pasture where the pipeline is now being laid. I am actually standing in the exact location of the Keystone Xl pipeline in this picture. This photo was taken in 2006. I converted the sunflower oil into biodiesel. It was part of my doctoral thesis on rural economic development using traditional and non-traditional, sustainable agricultural crops. As an analytical chemist, I saw the need for rural America to get away from petroleum/fossil fuels and I feel I proved that we (as a country) can be 100 percent independent from importation of crude oil. At any rate, the test plot (five acres) was successful.

I then began intensive research on TransCanada and what I found out both frightened me and gave me strength to channel the anger I had at that time. I refused their one offer they made me on the land and in my counter-offer, explained that the property was worth $125,000 and not the $8,063 they were offering. In that letter, I told them I did not recognize their right of eminent domain.

I did not hear anything until much later, when I received a lawsuit for condemnation in the same county court. At this point, I began searching for an attorney to represent me and contacted every non-profit environmental group I could find on the internet, to no avail. I finally contacted a local attorney who said she had experience in condemnation suits and would take the case, which she did. From the very beginning, I explained to her that I would not settle under any circumstances and that I was basing my argument on Constitutional grounds. We went to the condemnation hearing and they ruled against me and for TransCanada in the amount of $10,080 "fair and just compensation" for the right of way on my property. I refused that offer. Before we left the courthouse, she and the attorney for TransCanada spoke and I was offered $20,000. I again refused.

The offers continued for several months and while I was preparing evidence for my attorney, she was trying to settle the case. I refused any and all offers and explained that I wanted to prove that they were guilty of fraud.

I bought this property in June 1988. It was an 14-acre tract with a pond, several creeks going through it and the creeks were fed by three separate springs. It was a combination of woods and pasture. From 1986-2005, I was employed as an analytical chemist and built the property as a sanctuary for wildlife and birds. We raised most of our food here and it was always my dream to leave this to my children and grandchildren to carry on my dreams of self-sufficiency and respect for nature and to be good stewards of the land entrusted to our care. A foreign private corporation, seeking personal economic gain has defrauded the American people and will be transporting a toxic material that has a history of causing cancer and killing wildlife in the Canadian province where it is being mined. It is also a material that threatens the adjacent water in that area and because of existing laws and an administration that balked on their promise to curtail climate change, my dream is dead. Roughly 30 years of blood, sweat and tears have been wiped away with the signature of a judge.

In March of 2012, I received an email from my attorney who informed me that the people holding the mortgage on my property, the Texas Veterans Land Board, were going to "foreclose on me if I refused to take a settlement offer" that she, the attorney for the Attorney General of Texas (representing the Land Board) and the TransCanada attorney were forging. I was pissed off. I had not been in foreclosure with the Veterans Land Board and they had no grounds to foreclose on the property. My attorney told me that this was the reality and it was up to me from this point forward.

For some strange reason, we did not hear anything back from them until November 2012 when I was told that the TransCanada attorney was requesting a mediation hearing with a third party mediation firm. I was given 48 hours to get to Austin, Texas where we met in an office from 9 a.m. to almost 4 p.m. I never met with the attorney for the Texas Veterans Land Board (Megan Neal) nor did I ever see or speak to James Freeman, the TransCanada attorney. I did have a witness at the negotiation however, for my protection. It was my intention to walk out of there, fire my attorney and bring a suit against TransCanada for fraud. Around 3 p.m., after sitting in that room watching the clock go by, the mediation attorney and my lawyer came in.  They both informed me that TransCanada had one final offer and that if I did not take it, the Veterans Land Board would foreclose on my property immediately and the only money I would receive in compensation would be the original award by the Special Commissioners on the condemnation right of way. TransCanada agreed to pay off the balance with the Texas Veterans Land Board, pay the state attorney fees, pay my attorney fees and then give me compensation in the amount of $20,000, more or less for damage to the property.

Under all common law, including Texas law, this is coercion and the agreement was signed under great duress. This cannot be argued. I signed. Within two weeks of this event, I turned around and filed a lawsuit against the Texas Railroad Commission, the permitting agency that gave TransCanada the permit to construct, and then filed a suit against TransCanada for injunctive relief and rescission of contract.