PART I: One Man's Stand Against the Keystone XL Pipeline 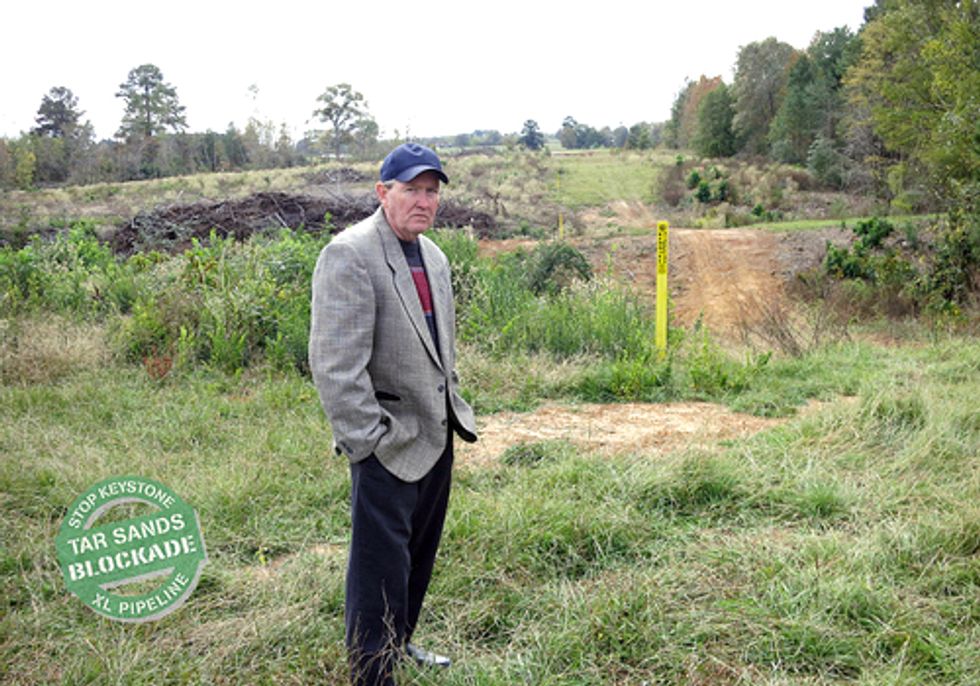 [Editor's note: Thanks to Michael Bishop for providing EcoWatch this firsthand account of what happens when a company like TransCanada claims eminent domain on one's property and begins building a tar sands pipeline—the southern leg of the Keystone XL. Unfortunately, this is one of many examples of corporations putting profits before human health and the environment in pursuit of extreme fossil fuel extraction. The good news is that people like Michael Bishop are fighting back. This is the first of a four-part series. Read Part II, Part III and Part IV.]

My name is Michael Bishop and I am a landowner in Douglass, Texas in Nacogdoches County. I am the victim of eminent domain by a foreign, private corporation. I received a letter from TransCanada in 2008 informing me that my property had been selected as a potential route for their "crude oil" pipeline. At that time, the line was to go on the eastern border of my property and would cross my creek. It was also going to adversely affect my neighbors as well.

My neighbors and I met with the company's representatives. At that meeting, I offered them a suitable and reasonable alternative on the western edge of my property where existing pipelines were located. They informed us that we "could not tell them where to put their pipeline, according to Texas law." I left that meeting feeling helpless and betrayed by the very laws that are supposed to protect me and other people in this state.

It was something beyond my control and I simply forgot about it until my wife woke me up one morning to let me know people were on our property. I immediately went out and confronted the trespassers who informed me they represented TransCanada and that they were there to perform historical and archeological evaluations and to survey the route of the proposed pipeline. I immediately told them to leave my property. They had not notified me, given me the courtesy of a phone call or knocked on my door. I was told that if I refused to allow them access to my property, I would go to jail. As a former Marine, this became a major point of anger for me and I told them that if they did not leave my property, I would call 911. They left. I did not hear anything from them for quite some time.

When they decided to move forward with the project, I was called by two members of the survey team—Bob Johnston and Chad Wren—who wanted to meet with me to discuss the "new" route for the pipeline. I took a witness with me and met them for coffee. I was told at that meeting that the company (TransCanada) had decided the best route was indeed on the western edge of my property. I told them that I did not want any money from them, would move any buildings or equipment in their way and would sign any releases they required as long as they agreed to stay on the western edge of the property and away from the 14 acre tract of land where I raised my boys and where my six grandchildren now play.

The western edge of my property is also away from where I raise food for my family since 1988. I was told by those two individuals that I was one of the few people in the county that had "not settled" and that TransCanada had all of their construction permits in place and were ready to begin work. We agreed, shook hands and I left with a fairly good feeling. It's important to remember that I refused any compensation for the right of way they were seeking.

Time went by and I had heard nothing from the two representatives from TransCanada, so I emailed Johnston. He finally responded but informed me that the company had decided to come across my 14 acre tract (the homestead tract) instead of the "free offer" of the adjacent, adjoining six acre tract where existing pipelines already existed. I was furious and felt betrayed. His explanation was, "Your neighbor in the land behind you has a lake that we cannot bore under and therefore we had to reroute the pipeline."

That neighbor's lake is a small cattle "tank," not a pond, and I couldn't drown in it if I was trying to commit suicide. I told them to f**k off and that I would fight them.