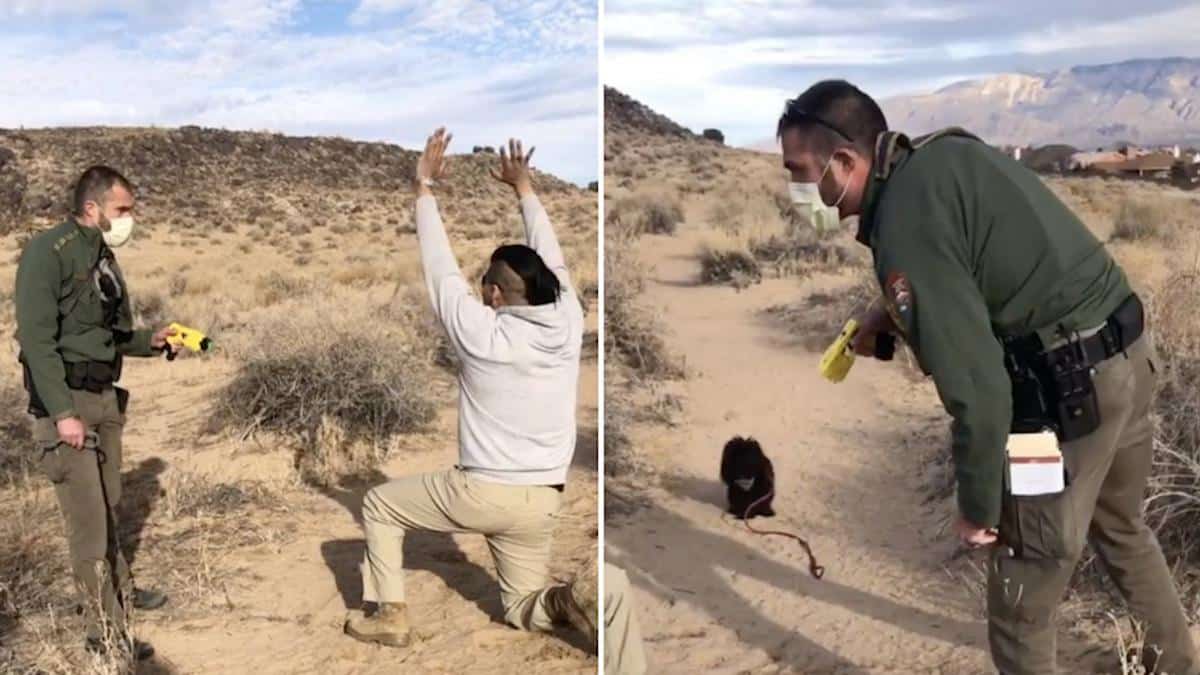 Darrell House, an Indigenous man and Marine Corps veteran, was tasered by a National Park Service ranger on Dec. 27, 2020 in New Mexico's Petroglyph National Monument after he walked off a trail and failed to cooperate with the ranger's requests. Darrell House / Instagram

Indigenous and wilderness conservation groups were among those on Wednesday responding with outrage to video of a National Park Service ranger tasering an unarmed Indigenous man after he walked off a trail in Petroglyph National Monument in New Mexico on Sunday and then refused to comply with the ranger’s orders.

Darrell House, a Diné (Navajo) and Oneida U.S. Marine Corps veteran, was hiking with his sister and his dog in the Albuquerque park — which features many petroglyphs, or ancient stone carvings that are sacred to tribes — so that he could harvest dirt for ceremonies and pray.

House said he walked off a marked trail in order to socially distance himself from a large group of walkers when “this park ranger started following me.”

“I guess he was upset about me going off trail before, you know, doing my prayers for the rocks,” House told KOB. In a video released by the National Park Service, House repeatedly refuses to disclose his real name to the rangers.

A park ranger in New Mexico repeatedly tased an Indigenous man and former marine for not showing ID and allegedly veering off of a trail.

Darrell House was recorded by his sister as he writhed in pain on the ground alongside his dog, Geronimo. pic.twitter.com/MF0wd2AvIr

“I didn’t see a reason to give my identification,” House told NBC News. “I don’t need to tell people why I’m coming there to pray and give things in honor to the land. I don’t need permission or consent. And I don’t think he liked that very much.”

A ranger House identifed by his last name Graden then fired his Taser at him. In a video recorded by his sister, House is seen writhing on the ground in agony next to his dog while the woman pleads for the attackers to stop.

“I don’t have anything; I apologize for going off the trail,” House says between cries of pain.

House said the attack left him “traumatized” and bleeding.

“I’m shaking,” he wrote in an Instagram post. “What hurt me the most was when my baby Geronimo felt the shock,” he said, referring to his dog.

“Here, you will see a white man abuse his power,” House. “The law doesn’t work for the Indigenous … You would think with George Floyd and Breonna Taylor, with the Black Lives Matter Movement, authorities would try to avoid having to pull a weapon out. Imagine I disarm him from the taser then what, I get charged with assault, or worse he grabs for his gun and ends me.”

“These scenarios have been going through my head since this afternoon,” he added. “I’m a son, I’m a brother, I’m a father. More importantly, I’m a human being.”

Darrell House is a Navajo & Oneida veteran. He was on sacred land that he visits to pray, when a federal officer confronted him, tasing him & his dog.

I am shocked by the video of a National Park Service ranger tasing Darrell House at Petroglyph National Monument on Sunday.

The Indigenous liberation group Red Nation released a statement on Wednesday condemning the attack on House. It read, in part:

The Petroglyphs National Monument, which is home to ancient Indigenous rock art that still retains spiritual and cultural significance to Indigenous people today, was initially created at the request of Native activists to protect the area from vandalism and developers. Instead, the NPS under the authority of the Department of Interior is policing Native people on Native land.
Public lands are stolen lands. Indigenous people have the right to practice their culture and spiritual ways on Indigenous land without fear of repression, discrimination, or violence. In consultation with our dear relative Darrell House, The Red Nation calls for a full investigation of NPS actions of racial terror that day, the termination of rangers Wineland and Graden, and restitution and a full apology to Darrell and his sister.

“LandBack begins with defunding racist police on Indigenous land, the Department of the Interior is no exception,” the group added.

Park rules are there for protecting the lands but the enforcement of those policies should not come at the expense of protecting the humanity of all those who visit, especially if these are their traditional homelands. Our parks and open spaces should be welcoming and inclusive places of healing and comfort, yet they are not for so many, especially for Black and Indigenous people and people of color.
The original purpose of the monument was to protect and promote the understanding of the petroglyphs in relation to the cultural and natural features of the West Mesa and to further the heritage of traditional communities connected to these lands. Petroglyph National Monument is a place where Native people should be able to visit and honor the past, the present, and the future on the very lands their ancestors stood without fear for their safety.

House said the incident would not deter him from returning to walk and pray in the park again.

“I will go back, he told KRQE. “I am going to continue to do my prayers, going off trail without permission. Without consent. That is my right.”