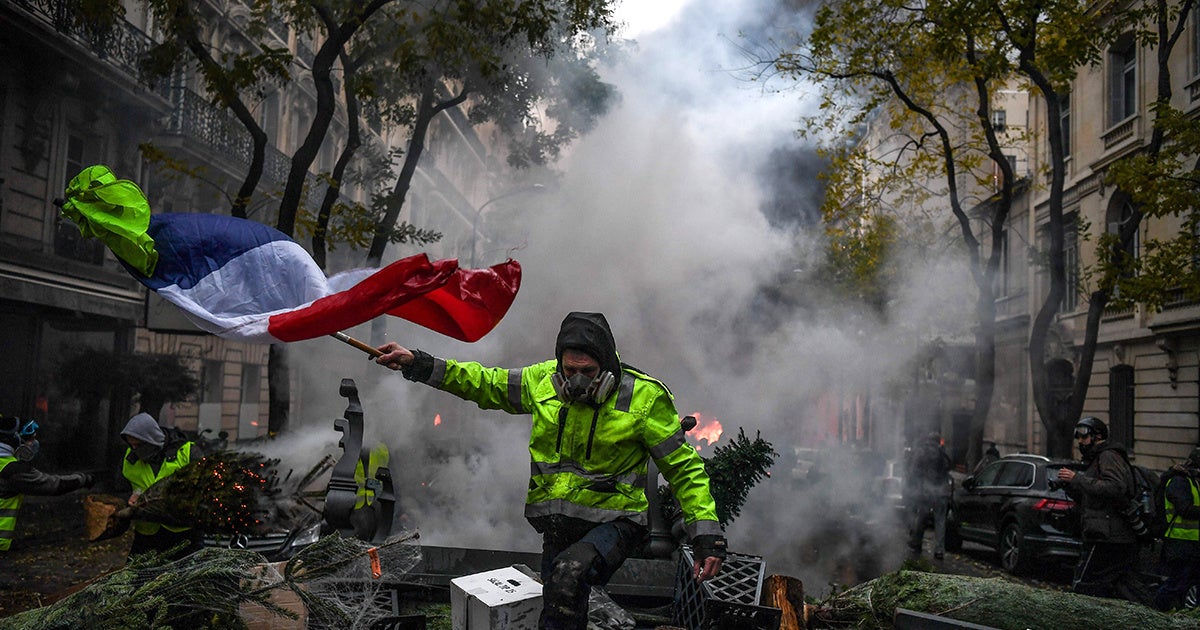 More than 100 people were injured and 378 arrested in Paris Saturday as the third week of protests over a new fuel tax caused the worst violence in the French capital in a decade, The Guardian reported.

Around 8,000 protesters and 5,000 police clashed as police used tear gas, stun guns and water cannons and demonstrators burned cars and looted stores, according to Australia’s ABC News. Demonstrators also expressed their rage with slogans graffitied onto the Arc de Triomphe reading “Topple the bourgeoisie” and “We’ve chopped off heads for less than this,” The Guardian reported.

The protests were sparked by President Emmanuel Macron‘s attempt to fight climate change by instituting a tax on gas and diesel in order to encourage motorists to purchase more environmentally friendly vehicles. The protesters, who call themselves the “gilets jaunes” or “yellow vests” for the reflective yellow vests all French drivers must keep in their cars since 2008, say the taxes unfairly target working people in the country’s rural and suburban areas who have to drive to get around, ABC News reported.

Scenes from the #GiletsJaunes #YellowJackets insurgency in France /1 pic.twitter.com/Iav8bt2uRQ

However, the fuel tax has also been a spark igniting pre-existing concerns about the rising cost of living and growing inequality.

“We are here to protest against the government because of the rise in taxes [in general], not just petrol taxes, which is the straw that broke the camel’s back. We’ve had enough. We have low salaries and pay too much tax and the combination is creating more and more poverty,” demonstrator Florence, 55, who works for a freight company outside Paris, told The Guardian.

“Clearly, countries where inequalities are the highest are the ones where these kinds of push-backs are mostly likely,” Gemenne said, citing the U.S., the UK and Italy as other countries were a similar backlash could be possible. “I guess it’s one of the reasons why populist leaders tend to be very skeptical about climate change and environmental measures,” he told Reuters.

The first physical protests were organized by truckers on Facebook and called on participants around the country to block roads on Nov. 17. Around 300,000 people answered the call. To date, three people have died in traffic accidents related to road blocks.

People block Caen's circular road on November 17, 2018 in Caen, Normandy, during a nationwide popular initiated day of protest called "yellow vest" (Gilets Jaunes in French) movement to protest against high fuel prices which has mushroomed into a widespr… https://t.co/W8GIFYRtAT pic.twitter.com/l5G7W5oOBC

Following Saturday’s protests, Macron ordered his prime minister Édouard Philippe to talk with the leaders of the “yellow vest” movement, The Guardian reported.

Eurasia Group analyst Charles Lichfield told CNBC before Saturday’s protests that it was unlikely Macron’s government would budge on the tax itself.

“Following the resignation of Environment Minister Nicolas Hulot, it cannot afford to lose the support of green-minded voters ahead of the EU Parliament elections in May. It could show more flexibility on how it allocates the revenue from the tax by increasing its proposed subsidy to low-income motorists or directing more funds to transport in rural areas,” he said.

Currently, most of the revenue for the tax has been earmarked for reducing the national deficit, which has added to popular anger, Reuters reported. Political economy of climate change specialist at Wilfrid Laurier University in Canada Simon Dalby told Reuters that carbon taxes work best when they are part of a broader project to transition towards cleaner transit and housing options.

“It is all about policies for transition to a post-fossil-fuel world, something that needs to be done quickly if the worst of the predicted climate disruptions are to be avoided in the coming decades,” he said.