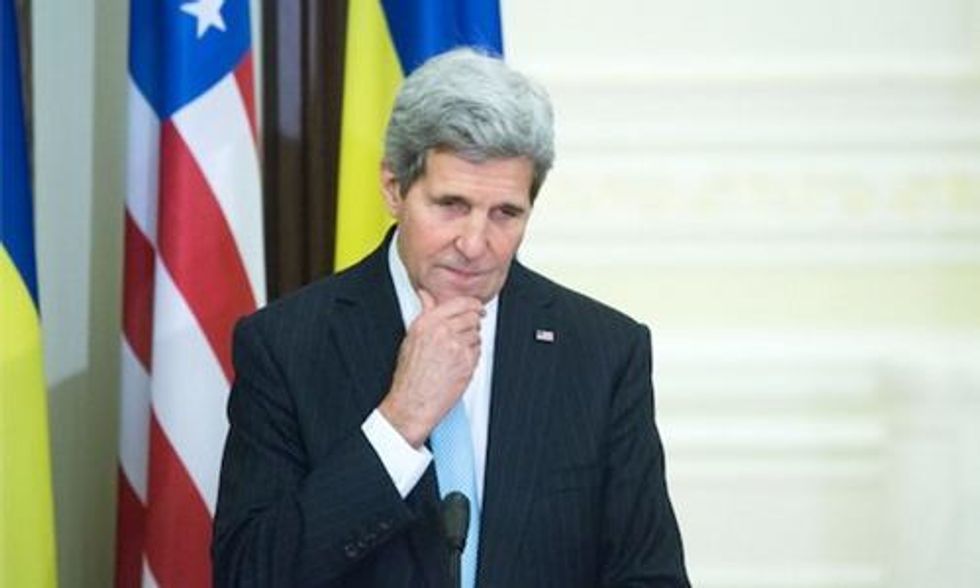 John Kerry's statement that the upcoming United Nations climate talks in Paris will result in no "legally binding" agreement on emissions reductions is being met with rebuffs on Thursday, including a retort that the U.S. Secretary of State must be "confused."

In an interview with the Financial Times Wednesday, Kerry said the outcome of the talks known as COP21 was "definitely not going to be a treaty" and would not include "legally binding reduction targets like Kyoto," referring to the 1997 Protocol that did call for such binding targets.

Kerry said later on Wednesday speaking at Old Dominion University that "we are seeking to reach an ambitious, durable and inclusive agreement at the UN climate conference next month in Paris. That’s our goal."

"Jurists will discuss the legal nature of an accord on whether it should be termed as a treaty or an international agreement," Reuters quotes Fabius as telling press.

"But the fact that a certain number of dispositions should have a practical effect and be legally binding is obvious so let's not confuse things, which is perhaps what Mr. Kerry has done," he said.

The EU made its position clear in September, stating that the bloc "is pressing for a global, fair, ambitious and legally binding international treaty that will prevent global warming from reaching dangerous levels."

"The Paris agreement must be an international legally binding agreement," a spokeswoman for the commissioner told the publication. "The title of the agreement is yet to be decided but it will not affect its legally binding form."

French President Francois Hollande also responded to Kerry's comments, telling reporters in Malta on Thursday that "if the deal is not legally binding, there is no accord, because that would mean it's not possible to verify or control commitments that are made."

Hollande also issued a joint statement earlier this month with his Chinese counterpart, Xi Jinping, declaring their goal of working towards an "ambitious and legally binding agreement."

That's the hope, as what Greenpeace UK's Christine Ottery and Ruth Davis wrote Thursday, as it would offer "[n]ot a declaration or other empty promises, but something that legally binds nations and holds them to their commitment."

The urgency of reaching such an agreement was underscored in the Philippines this week, where 20,000 survivors of Super Typhoon Yolanda capped off a week of climate actions ahead of the second anniversary of the historic storm.

Under the banner People Surge, the climate activists stated, "Now is the time to end the climate crisis. Let the world know—our survival is non-negotiable."

Marissa Cabaljao, secretary general of the People Surge Alliance of Disaster Survivors, stated that, like the group's demand to the Aquino administration, "Our call for justice goes the same for the world leaders meeting at Paris this December—we demand reparations from the top polluters to all victims of the global climate crisis and we join the call for a binding international climate agreement that will uphold people’s rights instead of ensuring the profits of big polluters."

Yet many climate campaigners have expressed little hope that the talks will result in anything but failure for the planet, citing the talk's corporate sponsors, the exclusion of "critical voices" and the fact that it "appear[s] to be rooted in the false premise that we have plenty of time."

But some say there's still hope to be found. Brian Tokar wrote at Common Dreams this week: "We have a long way to go and not much time, but if anything can help raise our hopes that it’s not too late, it is the power of social movements to intervene to change the story."

Some groups are hoping to show the power of such movements by convening outside the Paris talks to stage what they hope will be "the largest mass civil disobedience climate justice action that we have ever seen in Europe."

"The Paris moment will be defined not by what happens in the negotiating halls, but in the streets of Paris and around the world," a statement by 350.org reads. "Politicians aren’t the only ones with power. If enough people agree that it’s time for the world to move in a new direction and push together, the world will begin to move."

John Kerry: ‘Climate Change Is Not Just About Bambi,’ It Threatens All of Humanity