Paris and Beyond: Climate Movement Won't Be Silenced at COP21 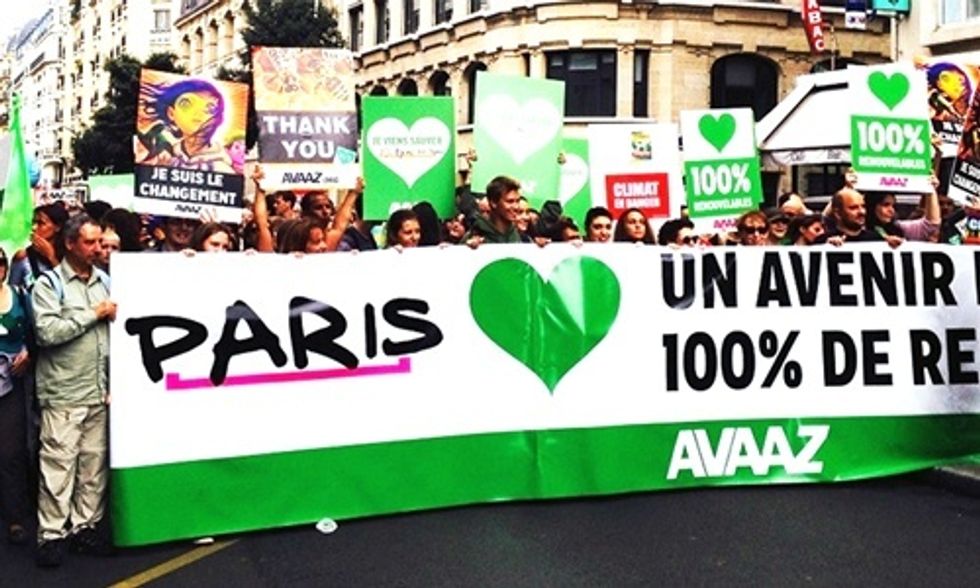 The march may be cancelled, security may be strengthened, but the global climate movement is vowing that its voice will still be heard as world leaders convene in Paris for international negotiations over the future of the planet.

"No matter what, citizens' voices will be heard throughout the Paris Climate Summit," reads a press statement from Climate Network International. Photo credit: fant0mette / Flickr

Citing security concerns in the wake of the attacks in Paris, the city's Prefecture of Police on Wednesday cancelled a massive climate justice march planned for Nov. 29, the day before UN-brokered COP21 climate talks officially begin, as well as more dispersed mobilizations scheduled for Dec. 12, the day after the summit ends.

But the climate movement—and the tens of thousands who planned to take part in the demonstrations—won't be easily silenced. While acknowledging that certain plans need to be retooled, organizers say that now, more than ever, is the time to "work for climate justice and the peace it can help bring," as 350.org's Hoda Baraka put it.

"No matter what, citizens' voices will be heard throughout the Paris Climate Summit," reads a press statement from Climate Network International—whether on the streets of Paris or at one of more than 2,000 coordinated events scheduled to take place in 150 countries this weekend.

To that end, the Climate 21 Coalition, made up of 130 groups including unions, environment, community and climate activist associations, outlined three ways in which activists will circumvent the prohibition under the state of emergency:

Meanwhile, the organizers behind the decentralized, civil disobedience protests known as the Climate Games also remain undeterred. "We believe that COP21 can not take place without the participation or mobilizations of civil society while governments and multinationals continue with business as usual," reads a statement from the Climate Games crew.

"We are still and more than ever dedicated to forms of actions that aim to address the root causes of climate chaos in determined non-violent ways," the statement continues. "Our playing field has been totally transformed in Paris, but everywhere else in the world we encourage people to continue with their plans and adventures."

In fact, "the decentralized creative nature of the Climate Games could become the alternative nonviolent response to this state of emergency," organizers declared.

Still, in the face of what they see as a government crackdown, many groups remain defiant.

For example, the "It Takes Roots to Weather the Storm" COP21 delegation—representing three powerful alliances of grassroots activists and frontline communities—said in a statement on Monday that "despite the ban on protest in Paris, we will be there to raise our voices against war, racism and pollution profiteering."

The statement continued: "Civil society, popular movements, Indigenous movements and society in general have the right to raise their voices in dissent, especially when our futures are being negotiated. The voices of Indigenous peoples, youth, women and frontline communities need to provide guidance in these negotiations, now more than ever."

Indeed, as author and activist Naomi Klein wrote on Monday in a piece highlighting what's really at stake in Paris, "being at the summit is a precious chance to speak about climate change in moral terms and to put a human face to this unfolding catastrophe."

As of early this week, groups were still considering alternatives and actions for the Dec. 12 day of action. But 350.org is confident that in the end: "Love will win out over fear and our movement will win over injustice."