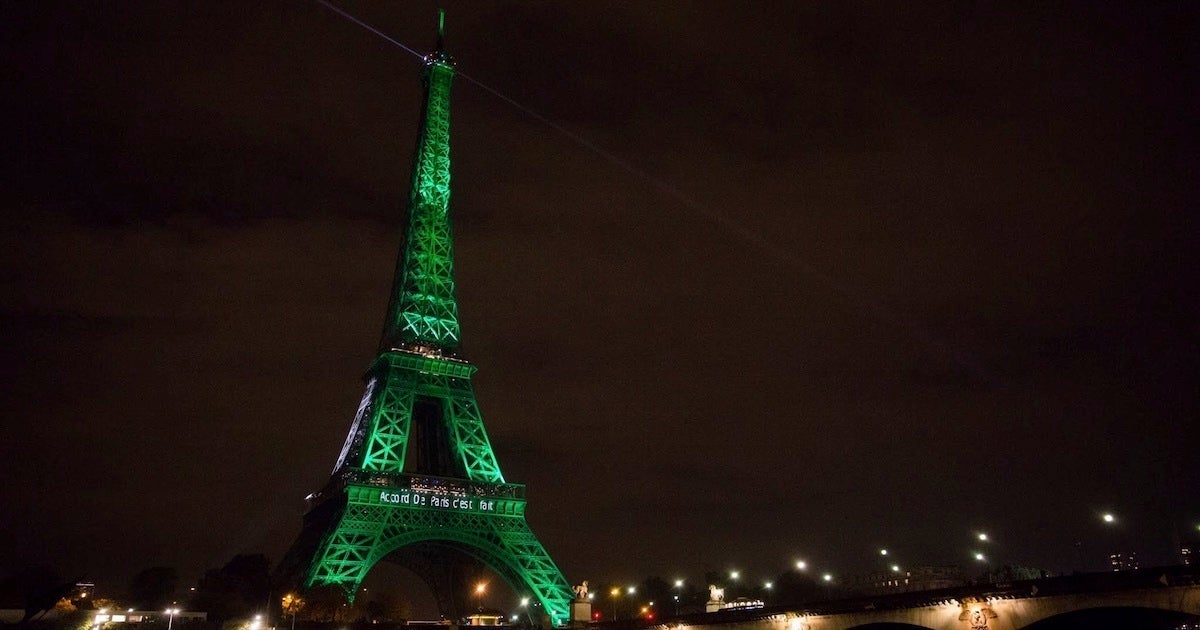 The Eiffel Tower shined green on November 2016 to celebrate the Paris agreement's entry into force. U.S. Department of State / Flickr

A new report highlights the significance of the Paris climate agreement in pushing global climate action.

All of the 197 signatories of the landmark accord now have at least one national law or policy on climate change, an analysis published Monday by the London School of Economics (LSE) found.

The Global trends in climate change legislation and litigation: 2018 snapshot shows there are now more than 1,500 national climate change laws and policies worldwide, with 106 introduced since the Paris agreement was signed in December 2015.

All 197 countries, nations & territories that have signed or ratified the Paris Agreement now have at least 1 national law or policy on climate change https://t.co/aKgLKEMwVY pic.twitter.com/AoacVtvKFr

The report, from researchers at the Grantham Research Institute on Climate Change and the ESRC Centre for Climate Change Economics and Policy at LSE, was released Monday as representatives of 193 governments meet at the two-week Bonn Climate Change Conference in Germany. The summit is aimed at increasing global action to cut carbon emissions and speeding up progress on the Paris agreement to keep global temperature rise this century well below 2°C.

The report’s authors pointed out, “The ability to import internationally declared targets into actionable national laws and policies, and to translate those targets into action, will have a great impact on the success of the Paris agreement.”

Also in the analysis, the researchers identified “a new wave” of climate change-related lawsuits and a number of “strategic” cases that “could have significant impact in holding governments and greenhouse gas emitters accountable for climate change.”

The are now about 1,000 of climate-related lawsuits, with some cases focused on forcing courts to rule on the consistency of countries’ actions with the Paris agreement. For instance, Greenpeace Nordic and the Nature and Youth environmental group sued Norway in November. The plaintiffs alleged that the government is contravening the Paris agreement and has failed to abide by its constitutional obligation to safeguard the environment for future generations.

According to the LSE report, more than 800 of the 1,000 climate-related cases stem from the U.S., including roughly a dozen lawsuits filed directly against the Trump administration’s rollbacks of climate regulation.

President Trump, who does not believe in climate change and is ramping up development in fossil fuels, controversially announced his intention withdraw from the Paris agreement, making the U.S. the only signatory in opposition.

U.S. cases also include efforts from San Francisco, Oakland and New York City that have filed lawsuits against major fossil fuel companies, alleging they knew about the threat of climate change for decades but concealed information about it.

On the other hand, the researchers also determined that in the U.S., “industry, conservative NGOs and others have brought suits to support climate change deregulation, reduce climate protections generally or at the project level, and target climate protection supporters.”