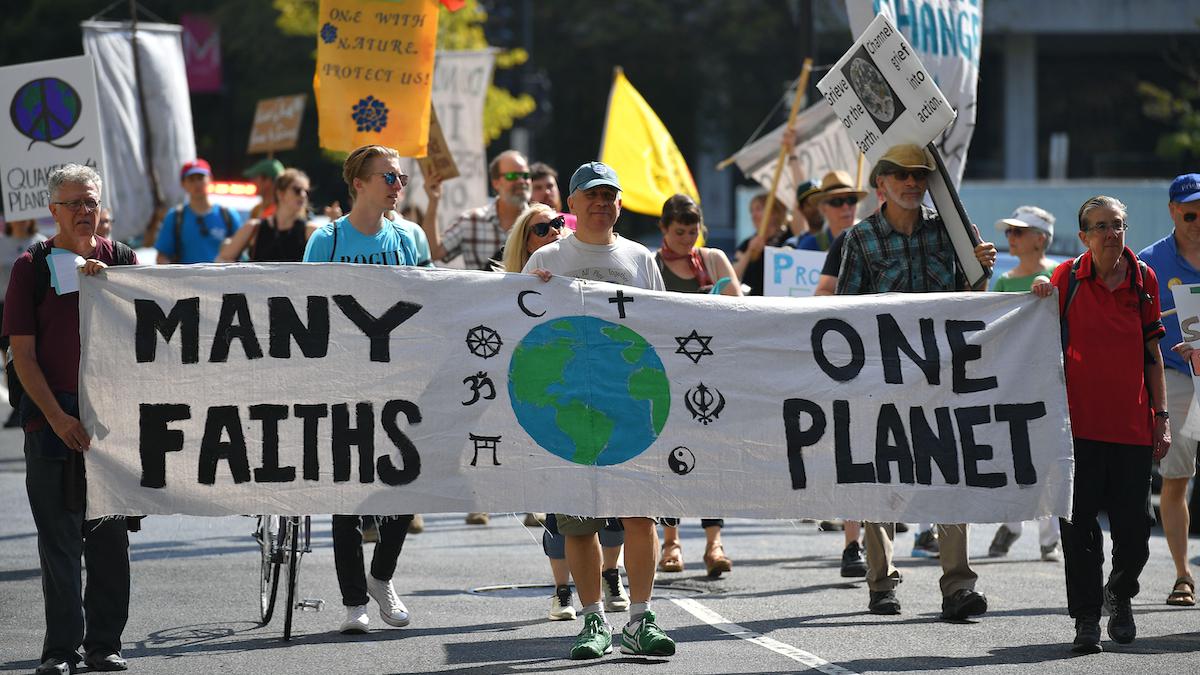 By Morgan Bazilian and Dolf Gielen

This month marks the fifth anniversary of the Paris climate agreement – the commitment by almost every country to try to keep global warming well below 2 degrees Celsius.

It’s an ambitious goal, and the clock is ticking.

The planet has already warmed by about 1°C since the start of the industrial era. That might not sound like much, but that first degree is changing the planet in profound ways, from more extreme heat waves that put human health and crops at risk, to rising sea levels.

Bold visions for slowing global warming have emerged from all over the world. Less clear is how countries will meet them.

So far, countries’ individual plans for how they will lower their greenhouse gas emissions don’t come close to adding up to the Paris agreement’s goals. Even if every country meets its current commitments, the world will still be on track to warm by more than 3°C this century, according to the United Nations Environment Program’s latest Emissions Gap Report, released Dec. 9. And many of those commitments aren’t yet backed by government actions.

The COVID-19 pandemic’s economic slowdown likely reduced global carbon dioxide emissions by about 7% this year, but that temporary dip will have very little effect, the report notes – unless countries prioritize a green recovery.

This fifth anniversary of the Paris agreement was intended to be a progress check, with countries expected to increase their commitments. But because of the pandemic, the meeting and negotiations were postponed to November 2021. A smaller online Climate Ambitions Summit is planned this year on Dec. 12 instead.

Despite the delay, some big goals have been announced. In particular, more countries are now committing to reach net zero carbon emissions by midcentury. The U.S. is also expected to rejoin the agreement next year under President-elect Joe Biden.

But how well-grounded are these climate commitments in actual budgets, policies and regulations? As energy policy experts, we have both been involved in global climate negotiations, technology analysis and policy design for the last two decades, and we have watched the national commitments for signs of progress.

The Paris agreement’s formal goal is to stay “well below” 2 degrees of warming. That’s based on political negotiations and scientific research that models the increasingly harmful effects rising temperatures will have on today’s economies, agriculture and environment.

The sooner the world’s emissions trajectory starts downward, the smoother the transition will be.

The leaders of China, Japan and South Korea each announced goals in recent weeks for reaching net zero carbon emissions by mid-century. But the detailed plans for how they will get there are largely missing.

Chinese President Xi Jinping drew global praise when he announced in September that his country’s emissions – the highest in the world – would peak earlier than expected, before 2030, and that China would strive to be carbon neutral by 2060. How and whether that happens will depend heavily on the country’s next Five Year Plan, due in March. The leadership’s priorities include expanding clean energy, but right now, China is still the world’s largest coal user, and coal accounts for three-fifths of its energy supply.

South Korean President Moon Jae-in offered more detailed goals in November when he ordered government officials to develop a road map for transitioning to cleaner energy and carbon neutrality by 2050. He said his country would invest billion in green projects, launch a carbon tax to encourage companies to reduce their emissions, and stop financing overseas coal plants. But those ideas, too, fall short of carbon neutrality in an economy that relies on energy-intensive industries.

The European Union is farther ahead. It established a net zero objective some time ago along with scenarios for how to get there. This summer, the EU also put climate-friendly projects at the heart of its pandemic recovery strategy. EU member states are now expected to develop long-term strategies for 2050 and revise their integrated national energy and climate plans through 2030.

The UK has announced a new 68% emissions reduction target for 2030. Meeting this target will require the UK to double its efforts compared to the last three decades.

Two countries have achieved net zero emissions, largely due to their tiny populations and thick forests that store more carbon than the country emits. Six countries have net zero carbon targets in law. Five plus the EU have proposed legislation. Several others have targets in policy documents or under discussion. 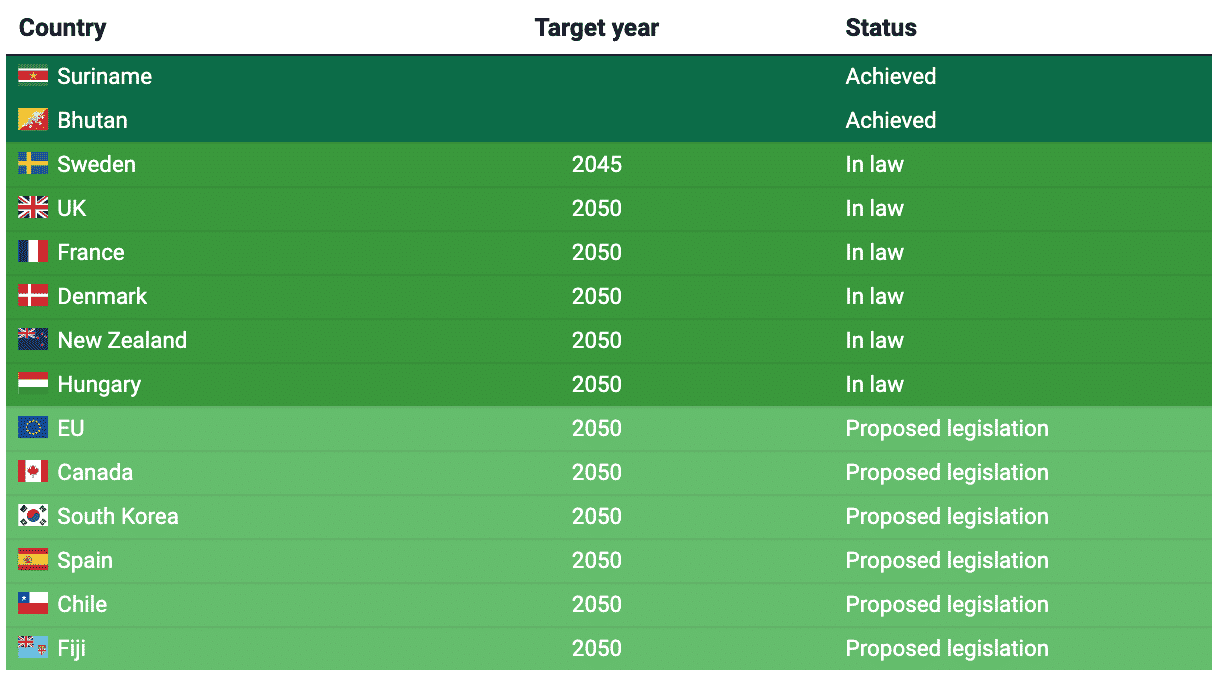 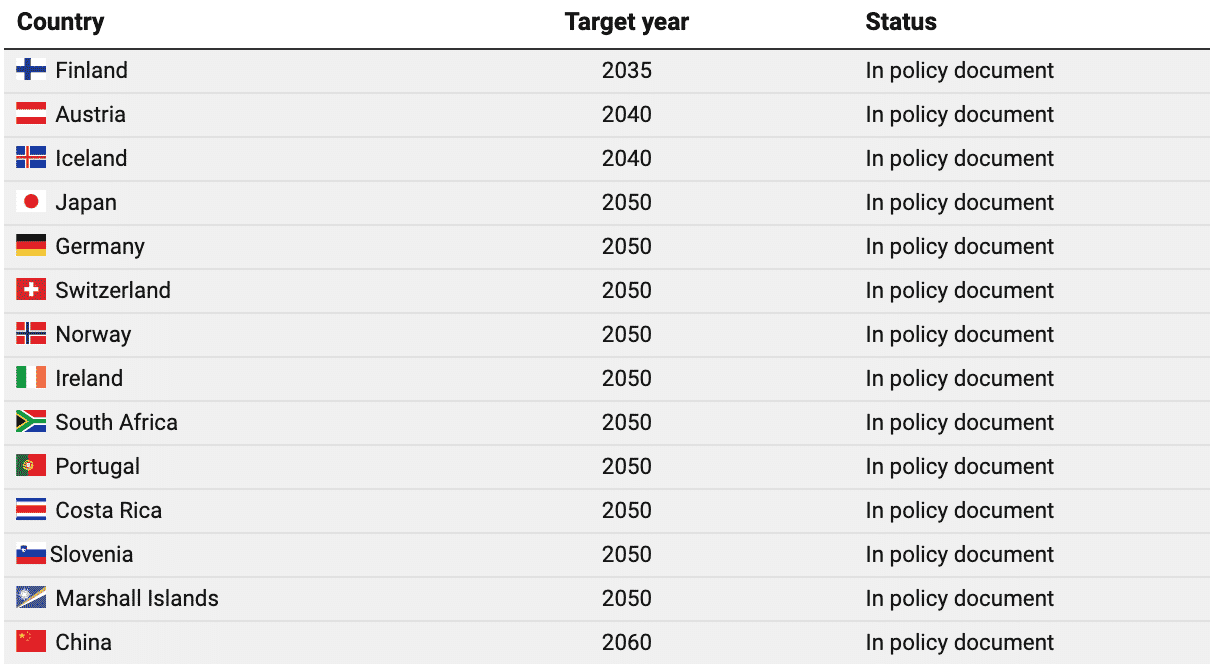 Overall, the current “nationally determined contributions” – the plans that countries submit to the UN spelling out how they will meet the Paris agreement – fall far short. A five-fold acceleration in emissions reductions is needed to come close.

Just days before the Ambitions Summit, only 13 countries had submitted new targets, and seven had announced they would not update their targets or resubmitted old targets. However, nearly half of high-emitting countries have indicated they will raise their mitigation ambitions by the end of next year.

Twenty-one states and regions have set long-term targets to reduce their emissions by 75%-90%, but how these will be met is not clear, a recent analysis found. Most pledges by cities are similarly aspirational.

Countries With the Most CO2 Emissions From Fossil Fuels

In 2019, the world’s six largest CO2 emitters together accounted for 51% of the global population and 67% of total CO2 emissions from fossil fuels.

Chart: The Conversation / CC-BY-ND. Source: European Commission. Get the data

Even if established clean technologies like renewable energy are at the core of the transition, the pace of change required to meet the Paris goals remains daunting. Socioeconomic issues will also have to be put front and center.

Net-zero solutions are technically conceivable for a range of energy-intensive industries, agriculture and transport methods, but the speed and scale at which they would have to ramp up to meet a 2050 deadline is formidable.

Our analysis found the deployment of renewable power would need to accelerate two- to three-fold. Global renewable energy use would need to go from around 20% of energy today to 65% by 2050, and from 28% to 85% of the power sector. Electric vehicle use would have to skyrocket, from less than 10 million EVs today to more than 1.5 billion by 2050.

Filling in the Gaps

To finance these transformations, investors need to be confident that the world is committed to a cleaner future. Perceived risk will drive up costs, and uncertain or delayed government action are big risks. International financial organizations, along with green banks and development banks, have an important role to play in encouraging private investment.

Moving from a focus on high-level goals to detailed pathways will help.

The global climate talks can continue to help by focusing on the specifics of the national commitments, ensuring they are detailed, well-designed and budgeted, and updated regularly.

The international community will also need to support countries that need assistance. Climate change is not the primary priority for most jurisdictions – though it is an existential crisis for some, including some small island states. That needs to be acknowledged and built in to the goals and planning.

Disclosure statements: Dolf Gielen works for IRENA, an Intergovernmental Agency that advises its members on energy transition and climate. Morgan Bazilian does not work for, consult, own shares in or receive funding from any company or organization that would benefit from this article, and has disclosed no relevant affiliations beyond their academic appointment.