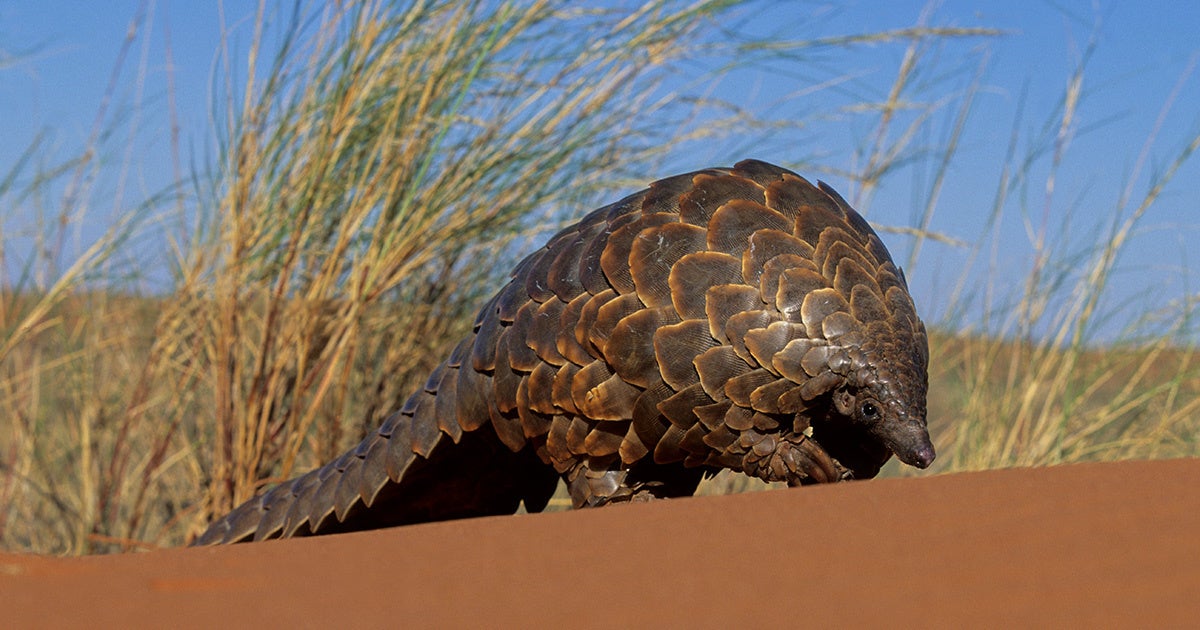 The pangolin is the world's most trafficked mammal. Nigel Dennis / Getty Images

A record number of pangolin scales were seized in Singapore in the past week, drawing renewed attention to the plight of the world’s most trafficked mammal.

The National Parks Board, Singapore Customs and the Immigration and Checkpoints Authority found 14.2 tons of pangolin scales in a beef shipment April 3, on its own a record-breaking haul. Then, on April 8, they found an additional 14 tons in 474 bags. That makes a total of more than 28 tons coming from more than 38,000 of the endangered mammals, the Associated Press reported.

“The Singapore Government adopts a zero-tolerance stance on the use of Singapore as a conduit to smuggle endangered species and their parts and derivatives,” the agencies wrote in a joint press release Wednesday. “Our agencies will continue to collaborate and maintain vigilance to tackle the illegal wildlife trade.”

The most recent haul was found on a container bound from Nigeria to Vietnam, the agencies said. The container originally said it was carrying cassia seeds, but authorities found .1 million worth of scales belonging to two species. In total, the scales found over the five-day period belonged to four different African species of pangolin, the Associated Press reported.

The April 3 haul was also found on a boat traveling from Nigeria to Vietnam. In addition to .3 million worth of scales, authorities found 177 kilograms (approximately 390.2 pounds) of carved elephant ivory, The Straits Times reported.

#BREAKING Nearly 13 tonnes of #pangolin scales originating from Nigeria, likely from 17,000 #pangolins, were seized yesterday from container in Singapore, the biggest single haul in the world in recent years https://t.co/JxN9g6zHFx via @stcom#WildlifeCrime #WildlifeTrafficking pic.twitter.com/BnFTSX5GlH

Pangolin scales are valued for their use in traditional Chinese medicine, despite not having any proven health benefits. The meat is also considered a delicacy in some countries.

Before this week’s discoveries, the largest intercepted pangolin shipment was 12 tonnes (approximately 13.2 tons) in China in 2017. Singapore had previously apprehended 440 kilograms (approximately 970 pounds) in 2015 and 2016.

“The sheer size of these two latest seizures is unprecedented and will undoubtedly prove a major setback to the traffickers concerned,” Richard Thomas of wildlife trade specialist group TRAFFIC told the Associated Press. However, he cautioned that seizures would not disable the trade, and that the number of scales found indicates an “industrial scale” operation.

Pangolin Specialist Group official Paul Thomson told The Associated Press that pangolin trafficking seemed to be increasing, but this has had an unintended consequence.

“The illegal trade in pangolin parts has been going on for decades. However, pangolins have typically been overlooked in terms of concerted conservation attention and action,” Thomson said. “This is changing thanks to growing awareness of pangolins. And this awareness has partly been driven by the high volumes of trafficking seen today.”