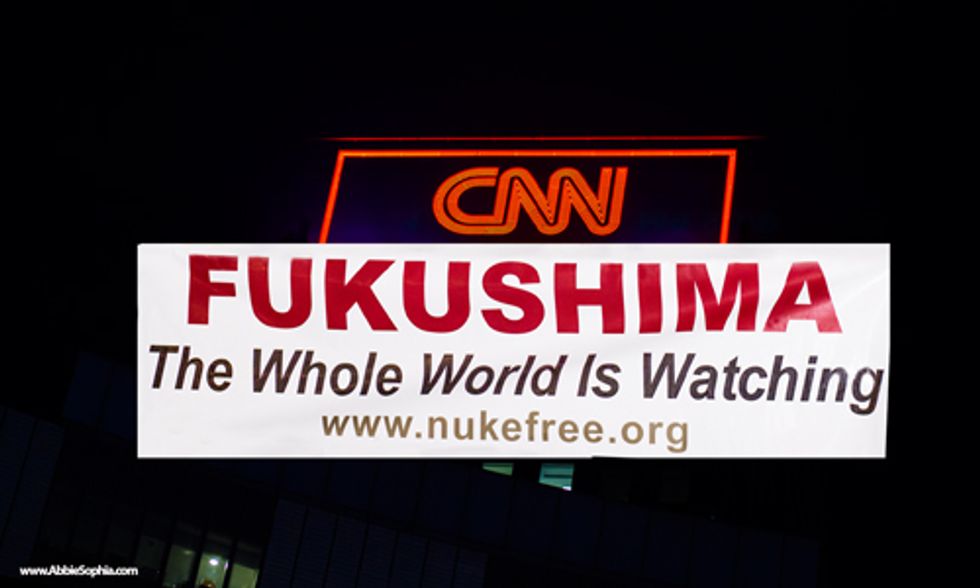 Even more critical: For decades the nuclear industry said zero commercial reactors could explode. When Chernobyl blew, they blamed it on the Soviet design. Now, three General Electric reactors have exploded at Fukushima. Unfortunately, as they age and deteriorate, there may be more to come.

Here are some more numbers to tally. More than 1,300 fuel rods sit in a damaged fuel pool 100 feet in the air at Fukushima 4. They contain radioactive cesium equivalent to 14,000 times what was released at the bombing of Hiroshima. There are some 6,000 rods in a common fuel pool nearby. There are some 11,000 rods scattered around the site. The three melted cores from units One, Two and Three are missing. There are roughly 1,000 tanks holding billions of gallons of hot radioactive water that are leaking and will collapse in the next big earthquake.

All 50 allegedly operable reactors in Japan remain shut. Germany is on its way to total green power.

As it aired on CNN, a grassroots coalition presented more than 150,000 signatures to the United Nations, requesting a global takeover at the accursed Fukushima, where three reactors cores are missing and radiation still pours into the ocean.

“More tests” were needed, they said. This week the U.S. Department of Energy will meet on how to aid an untried engineering exercise whose failure doom the planet. But if it can be done at all, it will take the entire global community to bring this beast under control.

CNN dumped a ton of hype on Pandora's Promise, and made no real attempt to hide its own pro-nuke bias. Lead-up debates were heavily weighted toward the industry, whose push for a new generation of reactors will ultimately go nowhere.

The scenario is obvious: Gates and his fellow mega-rich will pour into various theoretical atomic technologies a few hundred million dollars. They’ll write it all off their taxes. They’ll demand immunity for any accidents. It’ll all run billions over budget and years behind schedule. Then they’ll leave yet another radioactive mess for the rest of us to clean up.

Atomic energy makes global warming worse. Its truest promise is for ever more meltdowns—in health, the ecology and economy.

This movie maker needs to revisit Fukushima and report on those fuel rods flying in the sky, the river of radiation pouring into the oceans and the lethal long-lived poisons spewing into the air we breathe. As Hesiod says, when the original Pandora opened her forbidden box, “the Earth and sea were full of evils.”

But hope did remain, now in the form of the green power revolution. The world of finance is on our side. So is the insurance industry. And, basic sanity.

On the 11th of every month, in commemoration of Fukushima, many of us will fast in solidarity with the victims in hope of a survivable outcome. You can help by signing our petitions. With our grassroots organizing and escalated resistance, a Solartopian world can be won.

Pandora’s clear promise—call it a warning—is that our survival depends on it.