100 Panda-Shaped Solar Farms Are Being Built in China 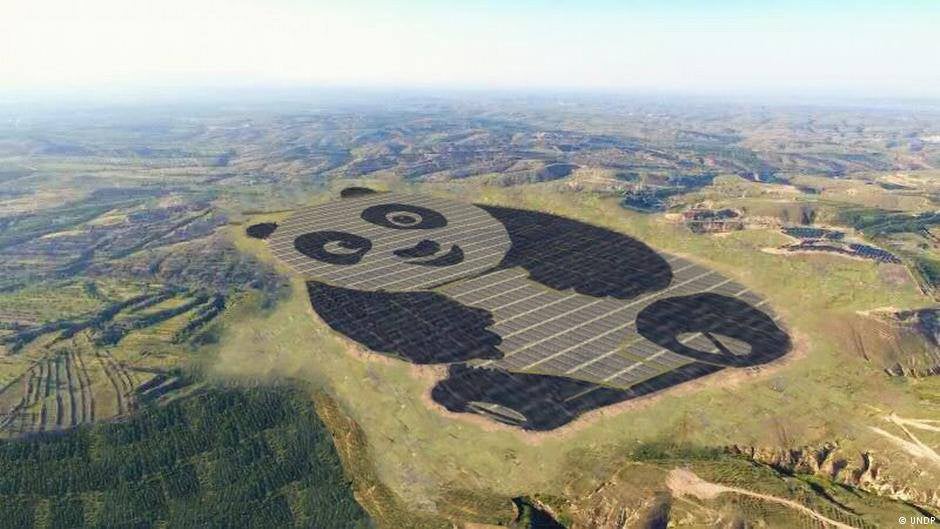 As the country’s national animal, pandas are everywhere in China. They appear on fuzzy slippers, crackers and coins.

And now, the beloved bear will make an appearance in a new field, quite literally: solar energy farms.

The Chinese energy company Panda Green Energy Group is building 100 panda-shaped solar energy farms across the country. From above, the assortment of panels will look like a cartoon panda smiling up at the sky.

The group has already build one in Datong, Shanxi province and is currently working on another. Still, one-fourth of China’s coal reserves come from Shanxi, making the northern province a key area for the country’s energy infrastructure.

The first farm in Shanxi spans 250 acres and produces 50 MW of solar energy. Once completed, the two 50 MW solar farms in the province will supply enough energy to power 10,000 houses annually.

According to Panda Green Energy Group, one panda-shaped solar farm will prevent the equivalent of 1.06 million tons of coal from being burned and 2.75 million tons of greenhouse gas being emitted in the next 25 years.

China is not alone in building adorable solar farms. The island nation of Fiji announced its plan in May to build a panda-shaped solar farm.

The plan to build 100 panda-adorned farms is part of a larger effort by the Chinese government to open new trade, energy and business opportunities. Titled the “Belt and Road” Initiative, the plan to create a 21st century trade route across the Eastern Hemisphere follows the ancient Silk Road path.

Since the initiative’s launch in 2013, 68 countries have signed up to participate. China continues to spearhead the project and is investing $150 billion per year toward the program.

Infamous for its smog-filled cities, China is one of the world’s worst offenders for pollution and greenhouse gas emissions. More recently, the country has put together a PR campaign to show China as a leader in renewable energy production.

China is quickly catching up to the world’s top solar energy producers. According to a 2017 report, China ranks third in the world for countries that use the most solar power (8,300 MW). Germany and Italy rank first and second, respectively.

With the installment of its smiling panda farms, China is taking a step in the right direction.