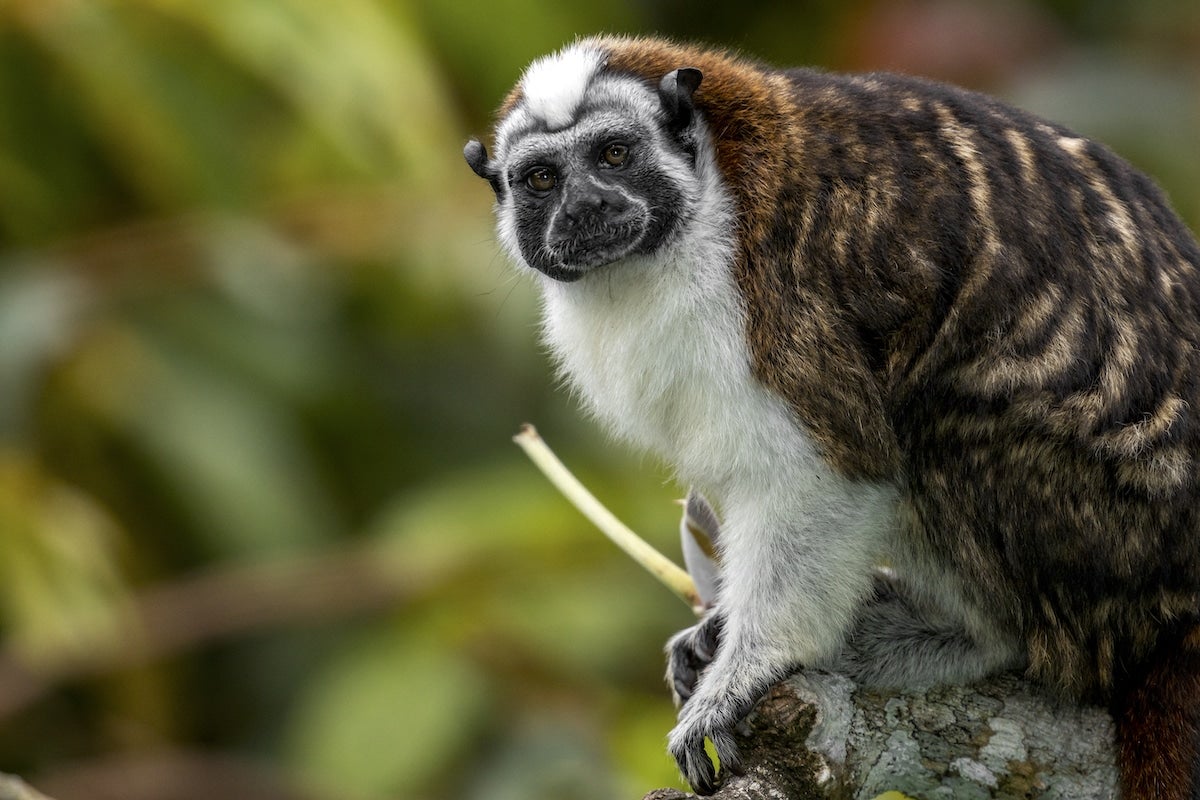 Panama is one of the 25 most biodiverse countries on the planet. Geoffroy’s Tamarin is Central America’s only tamarin species and Panama’s smallest monkey. Eduardo Estrada

In Panama, scientists, lawyers and politicians are working together to dismantle current legal systems and popular mindsets about Nature. And, they’re collaborating to build it back better for the future of their country and the planet.

It all started with Callie Veelenturf, an American marine conservation biologist and National Geographic explorer. While studying sea turtles in Panama, she witnessed harmful practices such as plastic pollution and fishing bycatch harming the environment and the animals that live there. Because Nature’s rights had not been recognized, no causes of action could be brought and no help enlisted. Left without recourse to act on Nature’s behalf, Veelenturf “felt a sense of conviction that taking a rights-based approach to Nature conservation internationally could be the system change that we need to establish balance and harmony with Nature.”

In early 2020, she pitched her idea to Panama’s first lady and to Congressperson Juan Diego Vásquez Gutiérrez, the youngest member of the National Assembly. Both were eager to develop this new framework to protect Panama’s biodiversity and ecosystems.

Panama is one of the 25 most megadiverse countries in the world, boasting an “impressive array” of marine and terrestrial wildlife, including many endemic species, Vásquez explained. It, therefore, plays a pivotal role in preserving biodiversity and mitigating climate change. As such, the congressman knew that a Rights of Nature approach “would represent an important paradigm shift in [his] country to centralize our cultural respect and love for nature” and that it would be “decisive” in the protection and restoration of his country’s biodiversity and resources.

“In short, this law recognizes that just as humans have inherent rights for existing (and similarly corporations) that Nature does as well,” explained Michelle Bender, the ocean campaigns director at the Earth Law Center. Bender and her team are experts in this specific area of law and lead a global push to codify the rights of nature.

Over the next two years, Veelenturf, the Earth Law Center, Vásquez and his advisors Luisa Araúz and Jorge Jaen developed and proposed that the rights of nature to “exist, persist and regenerate” be legally recognized. In late Feb. 2022, their efforts paid off; Panama’s President Laurentino Cortizo signed the Rights of Nature into national law.

Additionally, because western legal systems largely function under a “rights-based” framework, recognizing Nature’s inherent rights provides the natural world (and people wanting to protect it) a legal basis with which to advocate for more protective policies and under which to bring causes of action, Bender told EcoWatch.

So, what exactly does the law do? According to Veelenturf, Bender and Vásquez, it:

With this latest passage, Panama joins a number of other countries and governments that recognize the Rights of Nature. Some of these include Bolivia, Ecuador, Uganda, and Chile. Bender noted that Rights of Nature laws exist, at some level, in over 20 countries.

James May, a law professor at the Widener University Delaware Law School agreed that the legislation will “make it easier for people to bring legal cases on behalf of rivers, forests and ecosystems,” reported Grist. He noted that this could have major implications for Panama’s land and energy development policies, which are now required to respect and protect the natural world’s new rights.

Rights of Nature “will require the government to look before they leap regarding decisions that affect Nature,” May told Grist.

As for what’s next, Bender explained that recognizing these rights is just the first step. Now, procedures need to be implemented for causes of action to be brought on behalf of Nature. In Ecuador, 30 similar lawsuits have been brought on behalf of the Rights of Nature. This shift will require the creation of new standards and criteria, such as how to legally determine what is a healthy ecosystem, what is significant and adverse harm and what is sustainable or how much fishing is sustainable, Bender said.

The public must also be educated on and informed of their new power and right to defend Nature. This, and the actual implementation of the new law, will require complex processes and changes, Veelenturf noted.

She concluded, “The time is now to transform our legal systems. Nature needs us.”