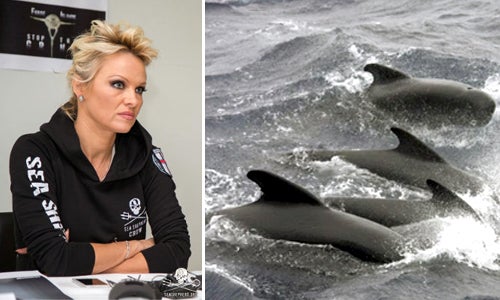 At a press conference Friday in the capital city of the Torshavn in the Faroe Islands, actress and activist Pamela Anderson joined Sea Shepherd Conservation Society to shine a spotlight on the brutal and archaic mass slaughter of pilot whales and other cetaceans known as the ‘grindadrap’ or ‘grind’ and show her support for Operation GrindStop 2014 campaign. 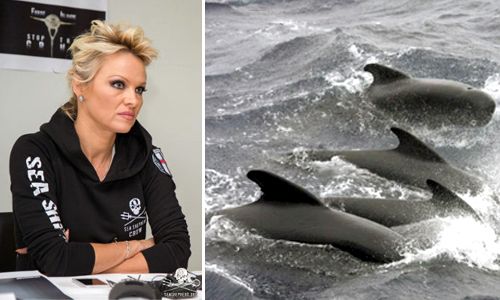 Pamela Anderson at the press conference in the Faroe Islands.

Anderson, a long-time animal protection advocate, explained that though the Faroese people once needed to kill pilot whales for food, there is no longer any need in the modern world to kill cetaceans.

“This is not for survival. There are very few things that happen like this, that are this brutal,” said Anderson. “We have to put this behind us and move on, and let the whales swim freely by. And I think it’s much more important for us in the future to save our oceans and the biodiversity of our oceans that the whales are very important to.”

Anderson stressed how it needs to be the next generation “to end this archaic abomination called the Grindwho brings this needless grind to a halt.”

“Young people probably feel pressure to follow in the footsteps of their ancestors. I think this is the perfect time to not listen to your parents, to think for yourself. Maybe there’s going to be a movement like there have been movements for many other things in the world where you look inside yourself and say ‘Is this something I should be doing just because my parents did it and my grandparents did it?’ This is a new time and the world is at risk … I think this is the generation that has to stand up and say ‘That was then, this is now; this is what I’m going to do.’”