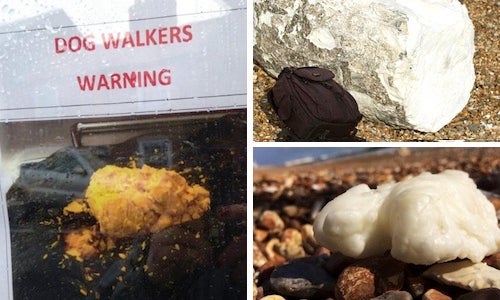 Palm oil is already known to be an environmental blight and now we can add another item to its rap sheet. The much-maligned substance is surfacing on beaches in the UK in forms of congealed blobs known as “fatbergs,” posing a threat to children and especially pet dogs who might accidentally ingest it, according to British media.

The germ-ridden chunks—some the size of boulders—are said to smell like diesel and are currently washing up on the coastlines of Kent and East Sussex, Mail Online reported.

Storms that originated in Barbados, Jamaica and Trinidad are being blamed for pushing the marine pollution across the Atlantic.

Unfortunately, the issue seems to be a regular occurrence in the UK’s coastal regions. Other British counties such as Hampshire, Devon and Cornwall have seen the waxy substance on their shores before.

This tweet from 2014 shows a huge palm oil deposit found on a beach in the village of Rottingdean in East Sussex. The rucksack placed next to it shows its scale.

Dog owners at Rottingdean take care. Deposits of palm oil on beach. Can be harmful to dogs. #rottingdean #palmoil pic.twitter.com/TgDz1HKIvp

A community Facebook page has even been launched to track and map the palm oil blobs that wash ashore in Cornwall and the southwest region of England.

In January, Cornwall Council posted a warning about palm oil surfacing on Cornish beaches, saying the lumps could be harmful and even deadly to pets if swallowed, the council said:

“Laboratory testing has shown that this substance is a non-toxic, degraded edible oil or fat. However, there have been reports of dogs becoming seriously ill after ingesting the substance. Some dogs that have consumed small quantities of palm oil have suffered from vomiting and diarrhorea, which has led to severe dehydration. Some dogs that have eaten larger amounts of the substance have suffered a range of effects including kidney damage, liver failure and blockages of the gut. In some instances this has resulted in the dog needing to be put down.”

So not only does palm oil kill orangutans but also dogs! Watch out anyone walking dogs in Cornwall http://t.co/Bvzt9S7mU0 #palmoil #cornwall

The council noted that palm oil can enter the marine environment when it is legally discarded by ships at sea where it can become further contaminated with other oceanic waste.

“So, if you’re heading to the beach please take care—while the substance has been described as non-toxic, given the reports about dogs becoming ill, we’d suggest keeping children and pets away from the deposits. And if you come into contact with the substance, wash it off with soap or shower gel and wash your clothes.”

The Mirror reported that an animal hospital in Cornwall had to give “life-saving treatment” to five dogs after they swallowed palm oil in the area’s beaches.

British television veterinarian Marc Abraham told Mail Online that the bits are a particular threat to dogs because “palm oil is so gelatinous it can get lodged in the oesophagus and require emergency surgery.”

A Brighton and Hove City Council spokesman told The Mirror that an area cleanup is underway and warning signs have been displayed to alert dog walkers of potential exposure.

“Our seafront and cleansing teams are working together to spot and dispose of the palm oil and have put up temporary signs alerting dog walkers to the possible danger,” he said.

#Brightoncouncil warns dog owners to keep pets away from tonnes of Palm oil washed up on the beach @bbcsoutheast pic.twitter.com/H8h5on6Jo0