‘Monsoon on Steroids’ Leaves a Third of Pakistan Underwater 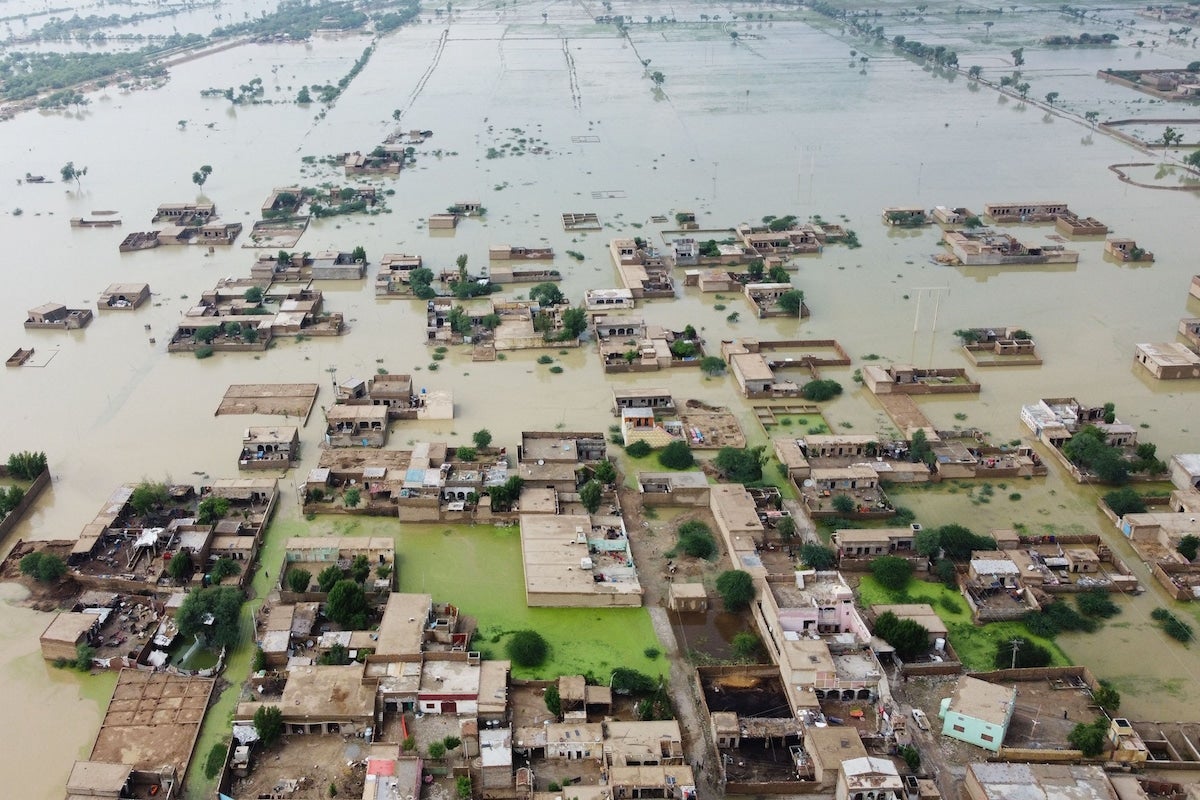 Senator Sherry Rehman, Pakistan’s Federal Minister of Climate Change, says one-third of the country has been submerged by the flooding.

“Literally, one-third of Pakistan is underwater right now, which has exceeded every boundary, every norm we’ve seen in the past,” Rehman told AFP, as BBC News reported.

“It’s all one big ocean, there’s no dry land to pump the water out,” Rehman said.

The government is blaming the unprecedented rainy season on climate change and has been seeking help from international donors, aid agencies and other countries.

“The Pakistani people are facing a monsoon on steroids — the relentless impact of epochal levels of rain and flooding,” said UN Secretary General António Guterres in an appeal for $160 million in aid for the deluged country, reported CNN.

“People living in these [climate crisis] hotspots are 15 times more likely to die from climate impacts,” said Guterres, as The Guardian reported. “As we continue to see more and more extreme weather events around the world, it is outrageous that climate action is being put on the back burner, putting all of us, everywhere, in growing danger.”

In the Swat Valley in northern Pakistan, roads and bridges have been washed away, isolating villages, reported BBC News. In the mountainous region, thousands have been evacuated, but many remain trapped.

It has been estimated by officials that the flooding has affected more than 33 million people.

“Village after village has been wiped out. Millions of houses have been destroyed,” said Prime Minister Shehbaz Sharif, as BBC News reported.

Many are living in temporary camps throughout the country.

“Living here is miserable. Our self-respect is at stake,” said Fazal e Malik, who has taken shelter on the grounds of a school where about 2,500 people are now living in the town of Nowshera in Khyber Pakhtunkhwa province, reported Phys.org.

An early estimate is that the historic floods have caused more than $10 billion in economic losses to the country, Planning Minister Ahsan Iqbal told Reuters.

Iqbal went on to say that the flooding had destroyed nearly half of Pakistan’s cotton crop, and damaged a substantial amount of its fruit and vegetable crops, along with its rice fields, BBC News reported.

“Our crop spanned over 5,000 acres on which the best quality rice was sown and is eaten by you and us,” 70-year-old Khalil Ahmed told AFP, as reported by Phys.org. “All that is finished.”

With places for aircraft to land underwater in the southeastern province of Sindh, emergency crews have been fighting to reach the people there, BBC News reported.

“Let’s stop sleepwalking towards the destruction of our planet by climate change,” Guterres said, as reported by CNN. “Today, it’s Pakistan. Tomorrow, it could be your country.”

<strong>Rare Earth Minerals Are Abundant Enough to Fuel Green Energy Shift, Study Says</strong>
There are enough rare earth minerals to make the transition
By Cristen Hemingway Jaynes
Plant-Based Eating 101: Everything You Need to Know
It’s a lot like how it sounds. In basic terms,
By Linnea Harris
Pennsylvania Becomes Eighth State to Set PFAS Drinking Water Limits
As awareness grows of the spread and health impacts of
By Olivia Rosane