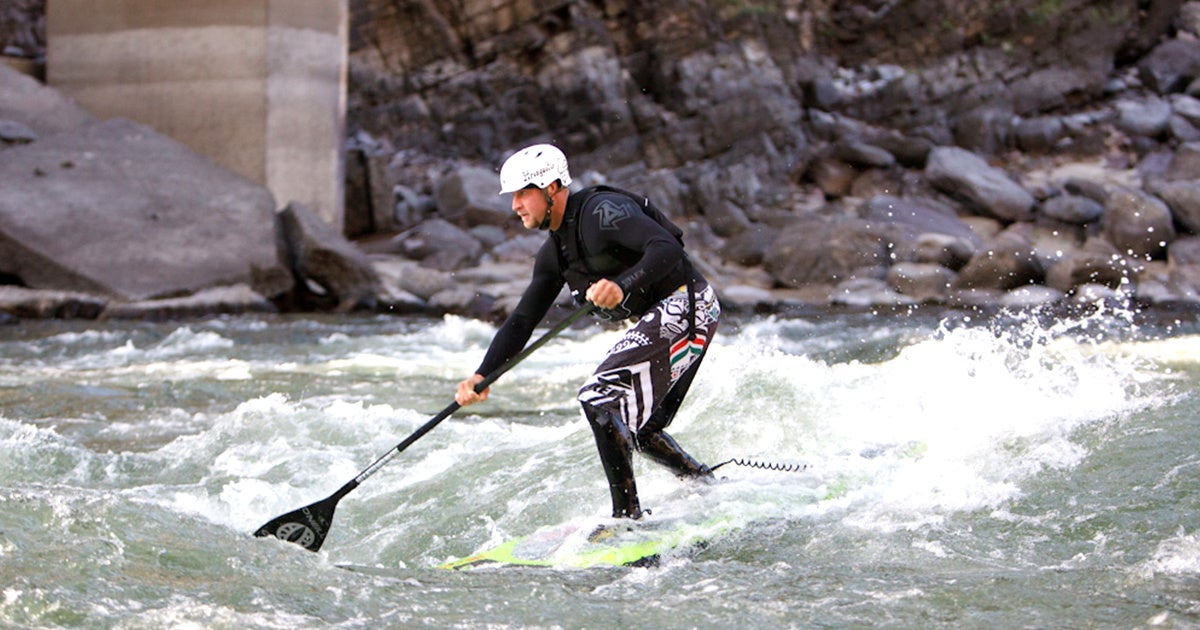 “How much moon do we have tonight?” I yelled to my friend Greg, trying to make myself heard over the sounds of wind and surging water. The sun was sinking toward the mountains all too quickly and our float-in campsite lay somewhere down the river’s bends in darkening forest.

Greg shrugged. He had no clue of the moon’s cycle either, which showed just how tragically pasty and over-civilized we’d turned. Our days had become filled with computer screens, not forest scenes; our nights capped with ceilings, not stars. All of which made this journey on standup paddleboards so sweet—or at least we hoped it would be sweet, if the pesky headwind would let up before we had to risk disfiguring ourselves while navigating boulder-strewn waters by headlamp and whatever light the moon might spare.

We were dancing with Montana’s Blackfoot River, its sinuous current wending us through the mountains, canyons and pine-studded pastures of the Rocky Mountains. We’d come to test our paddleboarding skills and experience the waters of one of my favorite books, Norman Maclean’s “A River Runs Through It,” a majestic paean to fishing, family and “the magic current of the world.

In Maclean’s youth the Blackfoot ran pure, cold and thick with trout. But mining, logging and ranching wore away at the river’s 1.5-million-acre watershed, and the river suffered. Water quality deteriorated, trout populations plummeted, and by the 1980s the Blackfoot had become yet another American river despoiled.

Then something remarkable happened. In 1993 local ranchers and conservationists, led by Trout Unlimited, banded together in a partnership with state and federal wildlife agencies to do something about it. Their effort, known as the Blackfoot Challenge, grew into a multi-decade, watershed-scale restoration effort. Mines were reclaimed, tributaries restored, riparian areas revegetated. Thanks to the collaborative efforts of the valley’s residents, who turned the Blackfoot Challenge into a landowner-led nonprofit group, the Blackfoot’s wounds healed.

Today, its waters once again run clear and cold. Trout are abundant. Grizzlies are back roaming its banks. A shining example of community-based restoration, the Blackfoot stands as one of the American West’s great conservation success stories.

Greg and I had been building our standup paddleboarding skills on the lower river near Missoula, but now we wanted to see the whole thing. Succumbing to a fit of living-room ambition—beers in hand, maps spread out—we decided to cover 80 miles of the Blackfoot in only two and a half days. We knew the trip had never been done, at least in the last century, for reasons that will soon become clear. With lightweight camping gear lashed to our boards and float-in campsites reserved, our brilliant plan would end with us paddling triumphantly, heroically even, into Missoula.

Never mind that it was unclear we could paddle that far and that fast. We hoped the river’s magic current would deliver. 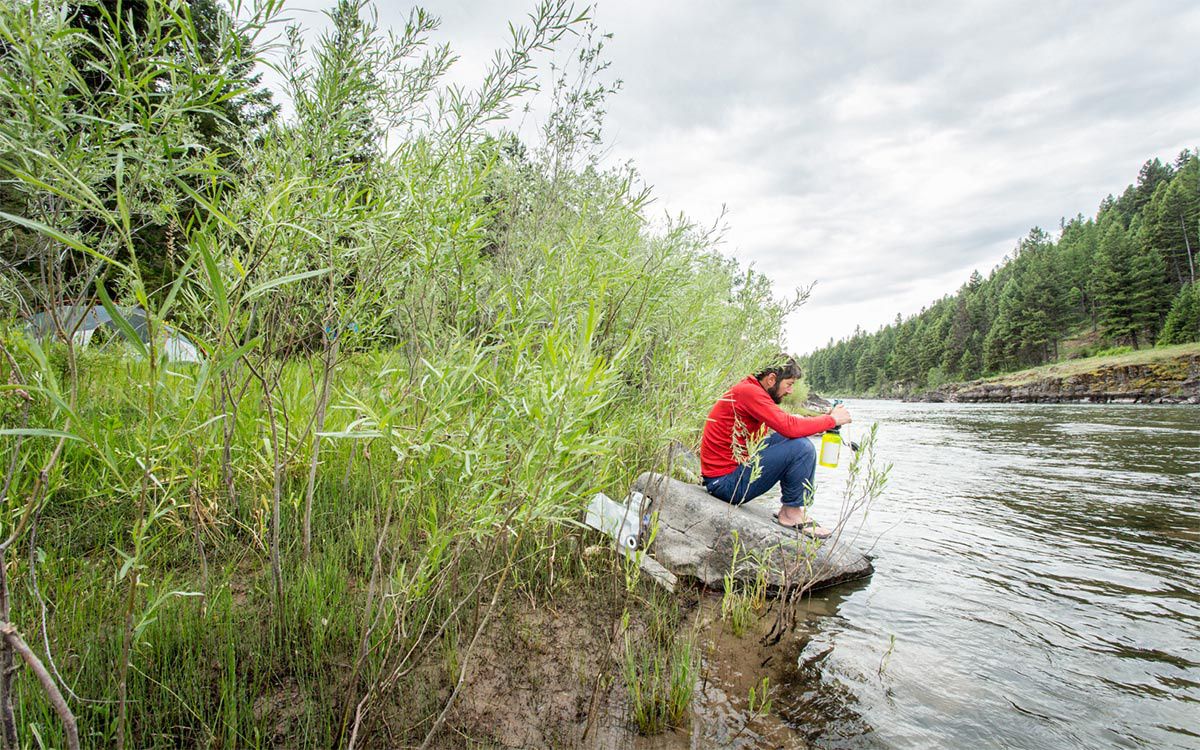 As the sun set that first night, the elusive moon stayed hidden, but the wind finally abated and we beached at our reserved campsite just as the last light leaked from the sky. The next morning, we jumped right back on the river, and its snow- and spring-fed waters swiftly carried us through golden ranchland into canyons of ancient stone. Rising to the north were the verdant pyramids of the Swan Range and the Bob Marshall wilderness complex, one of the largest roadless areas in the lower 48.

As we paddled onward, life revealed itself everywhere. Osprey surveyed from treetops. Explosions of swallows filled the air. In a dizzying display of fertility, a merganser passed with no fewer than 40 chicks in tow.

The day flowed on, and the world became a study in color and texture. The river was a rippling, blue ribbon laced with shimmering, silvery willows; rosemary-green cottonwood leaves flashed in the breeze; pine-clad mountains and terra cotta cliffs rose to touch the porcelain blue and white dome of the sky. 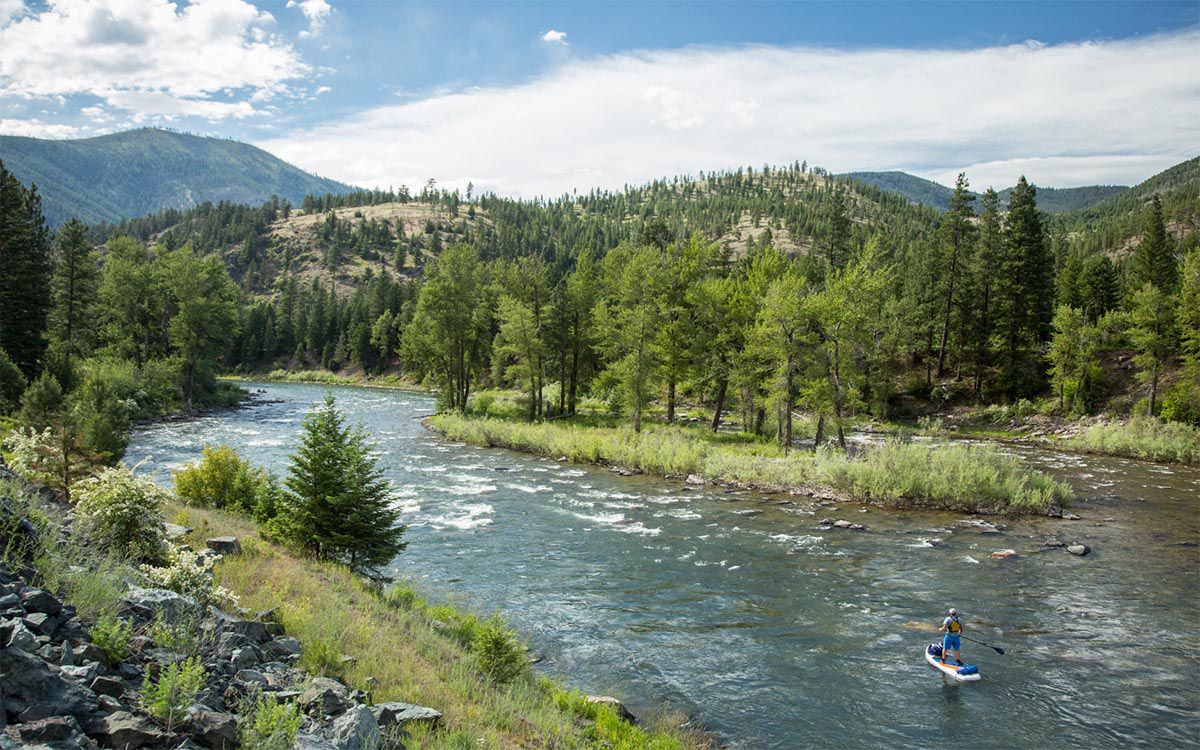 Somewhere along the way, the world beyond the riverbanks ceased to exist. I began to understand Maclean when he wrote, “I sat there and forgot and forgot, until what remained was the river that went by and I who watched … Eventually the watcher joined the river, and there was only one of us.”

We joined the river in other ways, too, as we hurled through rapids that sometimes sent us headlong into frigid, frothing water. But the mid-June sun was warm and our spirits were high. We even found the early-cycle waxing moon, a pearl boomerang arcing overhead.

As dusk settled over the mountains, salmon flies swarmed the air and I covered my mouth to avoid inhaling them. Birds with the opposite intent dove from all directions, mouths agape. Hungry trout leapt from the water to feast on the river’s bounty.

Sleep came easy that second night at another river-side camp beneath a spectacle of stars. The night was clear and we needed no rainfly. We also needed no alarm. Warblers, thrushes, sandpipers and more woke us with a symphony. I raised my head and smiled at the sight of the Blackfoot purling past.

The last day of our journey began in a quiet canyon between soaring walls of precambrian rock. We floated past beaver lodges and shoreline trees crowned with eagle nests. We still had 33 miles to paddle, and as we drew closer to Missoula our muscles ached. After seeing only a handful of other parties our first two days, the river got busy. First, fisherman appeared, then college kids in inner tubes—Missoula’s summer “tube hatch.”

The canyon walls opened and long, straight logs appeared helter-skelter on the banks. The largest lumber mill west of Chicago once stood here. Over a century ago, the Bonner sawmill supplied timber for the railroads leading the march of civilization across the young nation.

We passed beneath the roar of Interstate 90 and another river, the Clark Fork of the Columbia, approached on our left. Just below its confluence with the Blackfoot was the site of Milltown Dam, built in 1908. It powered the nearby sawmill, blocked migrating fish (and paddlers), and accumulated toxic sediments in its reservoir from upriver mining in Butte. A $100 million, eight-year removal and restoration process was completed in 2014, when the river was finally opened to paddlers for the first time in over a century. Greg and I celebrated the return of the confluence and a wild and free Blackfoot with cheers and our paddles raised. 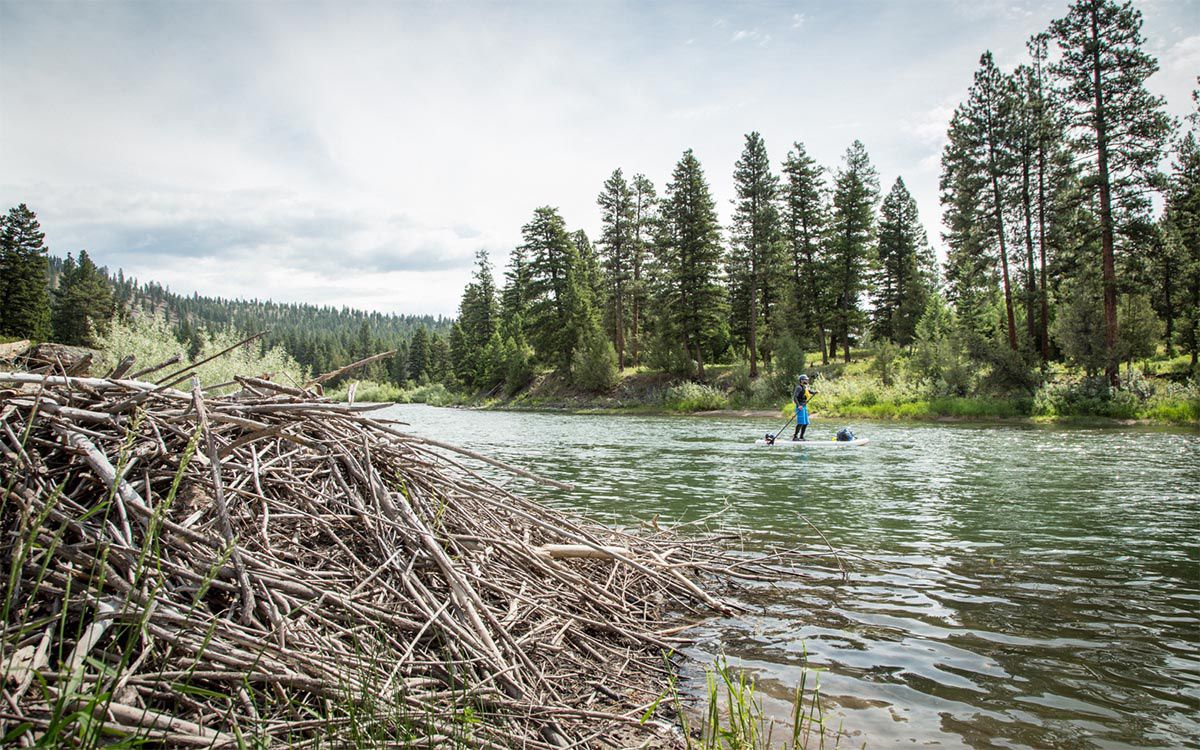 Okay, I’ll admit that our paddle-raising may have been metaphorical. After three days of nonstop paddling we barely had the energy to high-five. A beatific vision kept us moving: a few short miles downriver, the literary and fly- fishing haven of Missoula promised some of civilization’s finer benefits—brick-oven pizza and locally brewed ale.

As our last river miles slipped by, I thought of one of my favorite Maclean passages, from his story “USFS 1919: The Ranger, the Cook, and a Hole in the Sky,” a companion piece to “A River Runs Through It”: “Life every now and then becomes literature—not for long, of course, but long enough to be what we best remember, and often enough so that what we eventually come to mean by life are those moments when life, instead of going sideways, backwards, forward, or nowhere at all, lines out straight, tense and inevitable, with a complication, climax, and, given some luck, a purgation, as if life had been made and not happened.”

Then Greg and I were pulling our boards onto shore, summoning newfound energy for a vigorous high-five, and stumbling up to the deck of a white linen restaurant, where we were surely the most fragrant customers present. After 80 miles of standing on top of water, I swore I could feel the earth swaying beneath my feet, even though we were now on land. In this Anthropocene era—in which we’ve paved, dammed, and tilled the world, in which extinction rates rise and politics seem to grow ever uglier—Greg and I found hope in the growing movement to restore and rewild the natural world. Dams can be removed, rivers restored, wildlife revived. Nature heals remarkably well when we let it. Better still, when wild nature is near our cities, connective veins of wilderness can strengthen ecosystems and grant people nearby places to go deep and rediscover our own inner wildness—even if only for a couple of days. Heal nature and we heal ourselves.

Greg and I—our souls replenished by water and birdsong—raised cold pints of ale and toasted the Blackfoot. We need this river, like we need all wild and free rivers of the world, to show us the moon again and turn our lives to literature.

Where: the Blackfoot River starts near the Continental Divide in the mountains south of Glacier National Park and flows for 132 miles through Western Montana before joining the Clark Fork of the Columbia River near Missoula.

Getting There: Missoula has the nearest airport and Highway 200 is your access road for the Blackfoot. There are many public put-ins and take-outs, though the river pulls away from the highway for extended stretches that require travel by remote dirt roads. Only experienced paddlers should attempt the Blackfoot.

Best Time to Visit: The Blackfoot is suitable for paddling from May through September. May and the first half of June is high water and for experts only. July is the ideal month—the water is warm and still deep enough to cover the river’s many boulders, but not so high that swims are perilous. After July, paddling the Blackfoot can be like pinball as you navigate through boulder fields. Fishing is excellent all summer and fall as soon as high water subsides.

Camping: A scattering of campgrounds are available along the river, but the best sites are the five Montana Fish, Wildlife, and Parks float-in sites accessible only to paddlers. They can be reserved in advance by calling the FWP office at (406) 542-5564.

Pro Tips: While sections of the river can be paddled by beginners, the many class I-III rapids make the Blackfoot more suitable for intermediates and above. Paddleboards and other paddle-powered watercraft can be rented at The Trailhead or Strongwater in Missoula.

Reposed with permission from our media associate SIERRA Magazine.