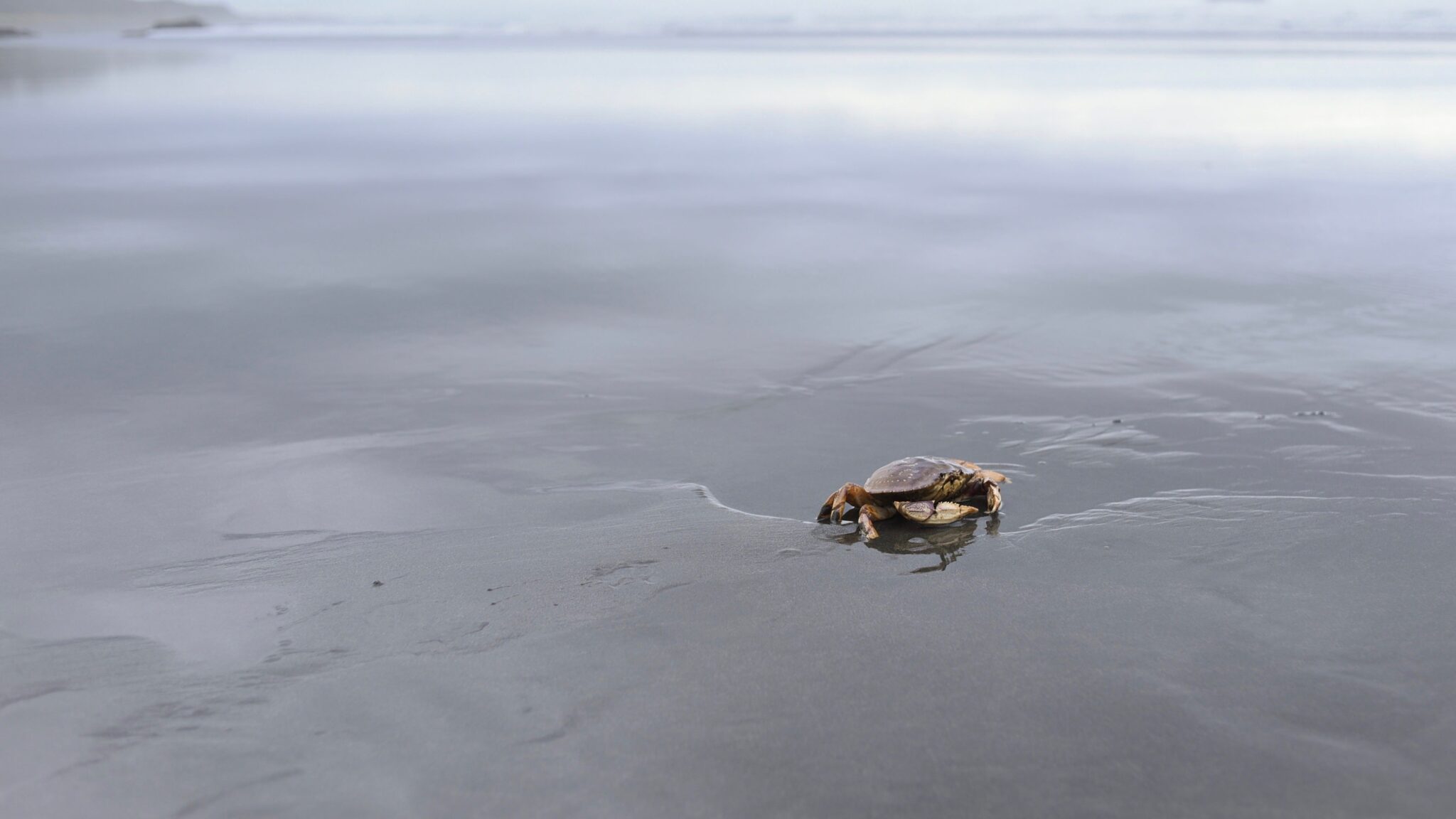 A solitary Dungeness crab sits in the foreground, at low tide on an overcast day. The crabs' shells are dissolving because of ocean acidification on the West Coast. Claudia_Kuenkel / iStock / Getty Images

As the Pacific Ocean becomes more acidic, Dungeness crabs, which live in coastal areas, are seeing their shells eaten away, according to a new study commissioned by the National Oceanic and Atmospheric Administration (NOAA).

The study authors looked at ocean acidification levels from 2016. They found that the lowered pH is dissolving the shells of young Dungeness crabs in Oregon, Washington and British Columbia. Without strong shells, the young crabs suffer damage to their sensory organs, as CNN reported.

The findings contribute to growing concerns about the viability of the Dungeness crab as atmospheric carbon dioxide, which continues to rise, is absorbed by the Pacific Ocean and increases acidification, as The Seattle Times reported.

Ocean acidity was not expected to damage Dungeness crabs so quickly. Researchers say it is a warning for the future of seafood and the health of marine life.

“If the crabs are affected already, we really need to make sure we pay much more attention to various components of the food chain before it is too late,” said study lead author Nina Bednarsek, a senior scientist with the Southern California Coastal Water Research Project, as CNN reported.

The study was published last week in the journal Science of the Total Environment.

Dungeness crabs are vital to the West Coast fishing industry — netting around 0 million annually. They are also important to tribal and recreational crabbers. The crabs have thrived in coastal waters that have recently become hotspots for ocean acidification, according to The Seattle Times.

Ocean acidification happens when the pH of ocean water drops. The primary cause is an increase in absorption of atmospheric CO2 over a long period. When CO2 is absorbed by seawater, a chain of chemical reactions is set in motion. That causes the sea water to increase its acidity as an increase in hydrogen ions tamps down carbonate ions, which would balance out the water’s pH level, as NOAA explained in a statement.

Crustaceans and corals need carbonate ions to help them build strong shells. In their absence, it becomes difficult for crabs, oysters and clams to build shells. It also stops corals from building strong skeletons and it weakens plankton, as CNN reported.

Previous research had shown that ocean acidification was causing harm to West Coast pteropods, small free-swimming snails that are food for Dungeness crab, according to The Seattle Times. Direct damage to Dungeness crabs was not expected for many years to come, so the findings have alarmed NOAA scientists.

“We found dissolution impacts to the crab larvae that were not expected to occur until much later in this century,” Richard Feely, study co-author and NOAA senior scientist, said as CNN reported.

The research boat that took samples in 2016 did not just find damage to the crab’s shell, but also to tiny hair-like structures crabs use to navigate their environments, which is something scientists had never seen before. Crabs without these tiny mechanoreceptors could move slowly and have trouble swimming and finding food, according to CNN.

As for shell damage, the shells showed signs of scarring and abnormal ridging, which may impair a crab’s ability to swim, stay buoyant and escape from predators. The damaged crabs were also smaller, which suggests developmental delays, as the Sustainability Times reported.

“We were really surprised to see this level of dissolution happening,” Bednarsek said, as The Seattle Times reported.

The authors say their findings mean more research is needed to make new predictions about the future of the Dungeness crab as the Pacific coastal waters continue to absorb more carbon dioxide, according to The Seattle Times.