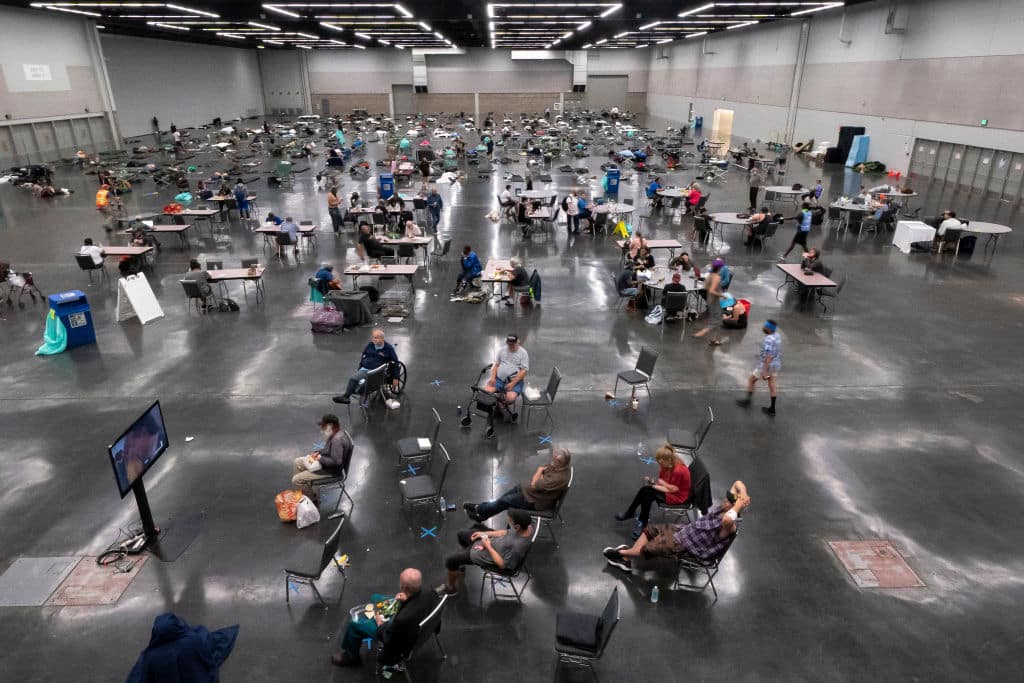 Portland residents fill a cooling center with a capacity of about 300 people at the Oregon Convention Center June 27, 2021 in Portland, Oregon. Nathan Howard / Getty Images

The average temperature in late July for Seattle, Washington, is 79 degrees Fahrenheit. But this week it could see 90 degree temperatures four days in a row, as National Weather Service (NWS) Seattle meteorologist Jacob DeFlitch told The Washington Post.

The Pacific Northwest is the latest region of the U.S. to brace for record-breaking temperatures as the climate crisis makes its effects known in heat waves around the world. Its residents joined the people of the Southern Plains to make up a total U.S. population of almost 40 million people under heat alerts Tuesday, The Washington Post reported. The region is not expected to bake as hotly as it did during the historic heat wave that soared past records there in 2021, but it could close in on daily reocrds and records for the length of time it swelters under higher than usual temperatures.

“To have five-day stretches or a week-long stretch above 90 degrees is very, very rare for the Pacific north-west,” Portland State University professor of climate adaptation Vivek Shandas said, as The Guardian reported.

NWS Seattle said that Tuesday was the day most likely to break heat records, as it posted on Twitter Sunday. The Seattle Times further reported that the city was projected to hit 94 degrees Fahrenheit and break the previous record for July 26–set in 2018–by two degrees.

Meanwhile, Portland is expected to hit 101 degrees Fahrenheit Tuesday and stay in the upper 90s for the rest of the week, The Washington Post reported Tuesday. Further inland, things are expected to get even hotter. NWS Spokane in Washington said its highest temperatures would likely come Thursday and Friday, with highs of 101 and 103 predicted.

In northern and inner Oregon, temperatures could hover between 100 and 110 degrees Fahrenheit, The Washington Post reported. Medford, Oregon, tied its 107-degree-Fahrenheit record high on Monday, while Dallesport, WA–across the state border–tied a record high of 108.

However, the most distinctive aspect of the current heat wave is not its heat but its projected length.

“It’s the duration that’s really noteworthy for this event,” NWS Portland meteorologist Colby Neuman told The Washington Post. “The most consecutive days of 95 degrees at Portland on record is six, and we’ll certainly be in the running to approach, tie or exceed that record. The next few days we’re going to be right around 100.”

A lengthy heat wave is a health concern in the usually mild region because it is less common for people to have air conditioning  there. In Portland, 78 percent of households have it, and that number falls to 44 percent in Seattle. High nighttime temperatures mean that people cannot cool their homes simply by opening their windows after the sun sets, Neuman told The Washington Post.

“Residents without air conditioners will experience a buildup of heat within their home through late in the week,” the NWS warned, as The Guardian reported, adding that this “will significantly increase the potential for heat related illnesses.”

The 2021 heat wave caused nearly 100 confirmed deaths in both Oregon and Washington, though the real toll could be higher, as The New York Times reported. In neighboring British Columbia, the death toll was as high as 619 people, as CBC News reported.

Since then, Portland has mandated that all new subsidized housing be built with air conditioning and anything built later than 2014 to have air conditioning in at least one room, The Guardian reported. It has also begun distributing cooling units and heat pumps to people especially at risk from high heat but has only installed 750 of a 15,000 goal. And that doesn’t cover unhoused people, who will have to rely on cooling centers being set up throughout the city.

Seattle has also set up cooling centers in libraries and other public buildings, The Seattle Times reported.