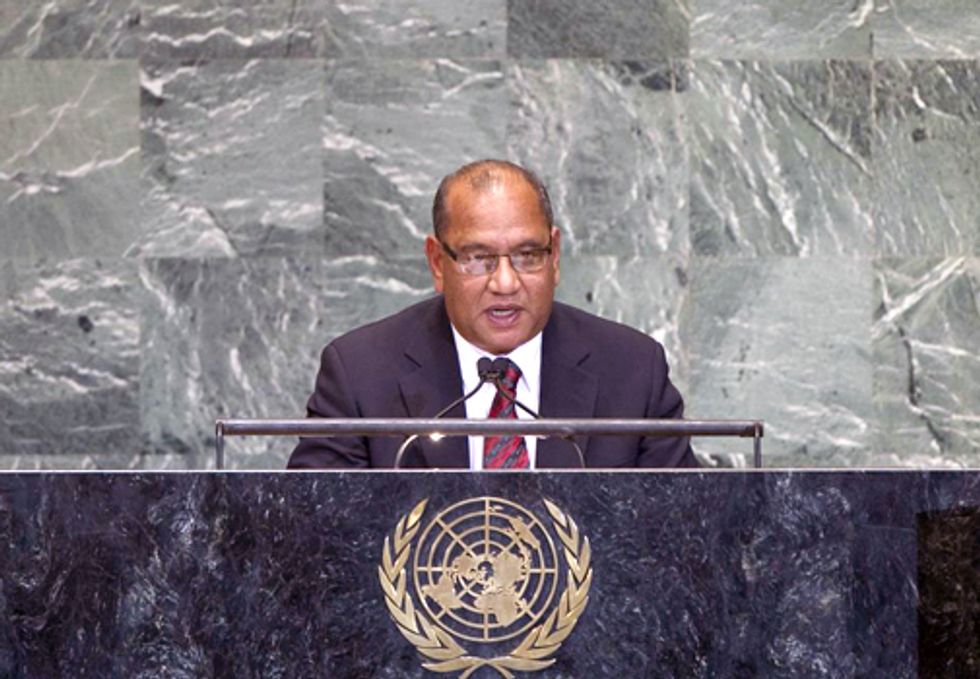 At the 67th General Assembly on the opening day of the annual General Debate at the United Nations (UN) Headquarters in New York City, two small Pacific Island states at ground zero for the potentially catastrophic effects of climate change and the need for mitigation efforts called on the UN to ensure rapid attainment of legally binding agreement curbing global warming gasses.

“The time is now over for endless North-South division and all-too predictable finger pointing must end,” said President Christopher Loeak of the Marshall Islands, one of the lowest-lying nations in the world.

He said his country had a national energy plan to cut its own emissions, boost its efficiency and pursue new technology. “I ask the rest of the world if you will also meet us in ambition,” he said. “Will it come soon enough?”

President Loeak noted that the Marshall Islands is at present heavily reliant on international assistance and has little other means to provide for adaptation measures needed to mitigate the effects of rising oceans.

“The growing realization that, however, wrongful, we must finance some of our own adaptation efforts is perhaps the most compelling reason to rapidly expand our private sector,” he added.

In his statement to the General Debate, President Sprent Dabwido of Nauru noted that greenhouse gas emissions continue to rise each year with no end in sight. “Small islands may be the canary in the coalmine, but we are all staring a global catastrophe right in the face,” he warned.

“If multilateralism is to have any credibility, then we must move to an emergency footing and those countries with the greatest capacity must immediately begin mobilizing the significant resources necessary to remake the energy infrastructure that powers the global economy,” he added.

He called for urgent action to achieve emission curbing and mitigation, and noted that many countries—including his own—are not on track to meet their Millennium Development Goals (MDGs), and in some cases have suffered setbacks because of the recent global economic downturn.

“At the same time, the flow of official development assistance from some channels has diminished, further jeopardizing our ability to achieve our MDGs,” President Dabwido said. “The UN's sustainable development initiatives have also been graced with an abundance of lofty rhetoric, but few resources.”

The MDGs—which seek to slash a host of social ills, including extreme hunger and poverty, infant and maternal mortality, and lack of access to education and medical care—were agreed on by world leaders at a summit in 2000. They have a 2015 deadline for their completion.

The two Pacific Island nation leaders are among scores of heads of State and government and other high-level officials present their views and comments on issues of individual national and international relevance at the Assembly’s General Debate, which ends on Oct. 1.