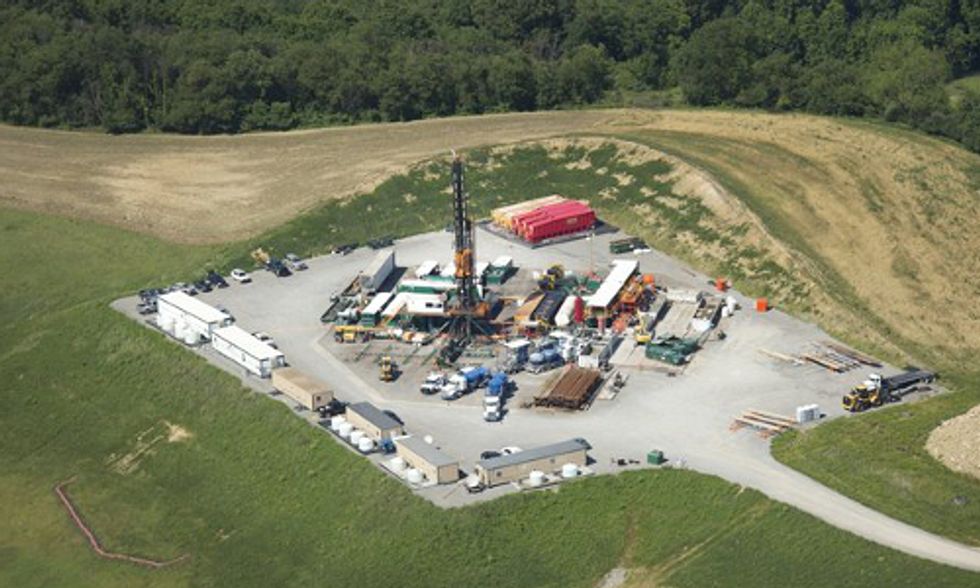 The Pennsylvania Supreme Court issued an opinion yesterday in the closely-watched case of Robinson Township v. Commonwealth of Pennsylvania, No. 63 MAP 2012.

The case was a challenge filed by several Pennsylvania municipalities against the state legislature’s adoption of Act 13. Act 13 sought to eliminate zoning authority from municipalities over oil and gas extraction.

The court ruled that Act 13’s elimination of zoning and land use planning authority was unconstitutional. Striking down parts of the act could allow homeowners and local authorities to have more control over where fracking occurs. Photo credit: Jason Cohn/ MCT

Act 13 was passed in 2012 to remove any local barriers to the expansion of drilling and fracking across the state. Provisions of Act 13 made certain oil and gas extraction activities a “use by right” in any part of any municipality, thus eliminating the ability of municipalities to use zoning and planning to control oil and gas drilling (and other activities) within their communities.

In 2012, Pennsylvania’s Commonwealth Court (Pennsylvania’s trial court for actions brought against the State of Pennsylvania), ruled in favor of the municipal plaintiffs. That court struck down certain portions of Act 13, ruling that they were a constitutional violation of the property rights of landowners who would be affected by the act’s elimination of municipal zoning authority.

The decision was then appealed by several parties to the Pennsylvania Supreme Court.

In yesterday's decision, the Pennsylvania Supreme Court also ruled in favor of the plaintiffs. However, in a departure from the lower court, the state Supreme Court rooted its decision not in the property rights of landowners, but on Pennsylvania’s Environmental Rights Amendment.

The amendment, adopted in 1971 by the voters of the state as part of the State Constitution’s Declaration of Rights, declares the right of citizens to “clean air and pure water” and to the “preservation of natural, scenic, historic and esthetic values of the environment.” The amendment also declares that the state and its municipalities must act as trustees to protect the rights of Pennsylvania citizens under the amendment.

The court ruled that Act 13’s elimination of zoning and land use planning authority—the primary method through which municipalities act as trustees—was unconstitutional. For, the court found, the state cannot interfere with the constitutional duty of municipal governments to carry out the duties imposed by the Environmental Rights Amendment.

In essence, the Pennsylvania Supreme Court delivered a ruling which limits the power of the state to interfere with the duty of municipalities to act as a trustee of natural resources.

The court thus overturned several sections of Act 13, including the sections creating the power of the state to nullify municipal zoning provisions which ran afoul of the act’s requirement that oil and gas drilling could occur in any area of a municipality, regardless of how that area was zoned.

The court’s decision was a drastic departure from that of prior courts with respect to the Environmental Rights Amendment. Ever since the amendment’s overwhelming adoption by the people of the commonwealth, courts have generally disregarded it, holding that its sole purpose was to provide additional authority to state agencies to protect the natural environment.

“Today was a significant victory for municipalities seeking to regulate the placement of oil and gas wells and other structures on the surface of land,” said Thomas Linzey, the executive director of the Community Environmental Legal Defense Fund (CELDF).

“Further, today’s decision may not only affect Act 13 or oil and gas drilling," said Linzey. "For years, the state legislature has sought to eliminate local authority on extraction and other activities, including forestry and coal, which the court referenced in its decision.”

For many years, CELDF has represented municipal clients adopting local ordinances that ban corporate projects harmful to communities. As part of that work, CLEDF has fought to overturn another Pennsylvania law—known as ACRE (Agriculture, Communities and Rural Environment)—which forced corporate factory farms into communities regardless of local zoning and land use planning laws which sought to limit industrial agriculture.

Linzey stated, “The court’s decision calls into question the constitutionality of any state laws which nullify the authority of municipal zoning ordinances and land use plans. Today’s ruling gives new life to people’s environmental rights, and serves more importantly, in some ways, to shield our communities from a state legislature that has been privatized by certain industries.”

“This ruling, while welcome, does not stop fracking of Pennsylvania’s communities, nor does it recognize the right of the people of Pennsylvania to govern their own communities without state or corporate interference,” Linzey explained further. “Today’s decision does, however, for the first time open the door for future rulings that would add that law."

"However, there remain tremendous legal barriers in place which subordinate the authority of people, communities and nature to protect themselves from fracking and the wide range of activities that the state legislature has forced into our municipalities,” explained Linzey.