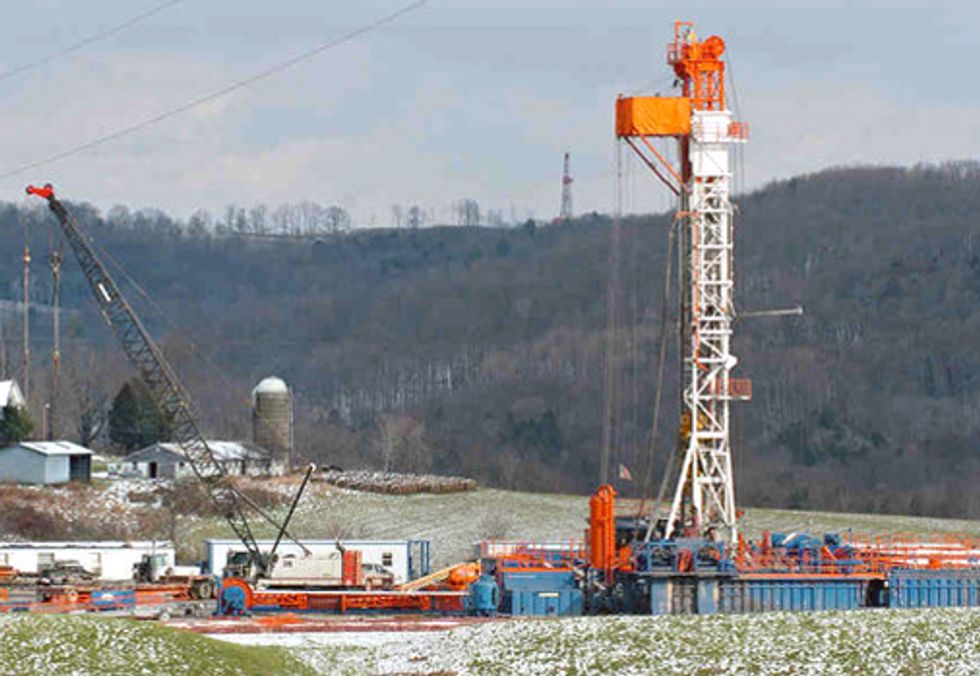 A drilling rig in Dimock, Pa.

White said he received a letter and corresponding documents highlighting the sworn testimony of DEP Bureau of Laboratories Technical Director Taru Upadhyay, who was deposed in a lawsuit alleging nearby natural gas drilling operations contaminated drinking water supplies in Washington County, causing serious health issues. In the deposition, Upadhyay said that the DEP was clearly aware of water impacts from Marcellus Shale drilling, but no notices of violation were filed—a violation of the state’s Oil & Gas Act.

Of more critical concern to Pennsylvania residents, according to White, was that the deposition revealed that the DEP developed a specialized computer-code system to manipulate the test results for residents whose water was tested by the DEP over concerns of adverse effects from gas drilling operations.

According to the transcripts, which have been filed as exhibits in a related lawsuit in Washington County Court of Common Pleas (Haney et al. v. Range Resources et al., Case No. 2012-3534), the DEP lab would conduct water tests using an EPA-approved standard, but the DEP employee who requested the testing would use a specially designed ‘Suite Code’ which limits the information coming back from the DEP lab to the DEP field office, and ultimately to the property owner.

The code in question, Suite Code 942, was used to test for water contamination associated with Marcellus Shale drilling activities, yet specifically screens out results for substances known to be hazardous and associated with Marcellus Shale drilling. Similar codes, Suite Code 943 and 946, are also used by the DEP in similar circumstances; both of these codes omit the presence or levels of drilling-related compounds.

As a result, if Suite Code 942 is applied, the report generated for the homeowner by DEP only includes eight of the 24 metals actually tested for: Barium, Calcium, Iron, Potassium, Magnesium, Manganese, Sodium and Strontium. The homeowner would not be given results for: Silver, Aluminum, Beryllium, Cadium, Cobalt, Chromium, Copper, Nickel, Silicon, Lithium, Molybdenum, Tin, Titanium, Vandium, Zinc and Boron.

“This is beyond outrageous. Anyone who relied on the DEP for the truth about whether their water has been impacted by drilling activities has apparently been intentionally deprived of critical health and safety information by their own government,” White said. “There is no excuse whatsoever to justify the DEP conducting the water tests and only releasing partial information to residents, especially when the information withheld could easily be the source of the problem. This goes beyond incompetence; this is unlawful and reprehensible activity by the DEP. If these allegations are true, there needs to be a thorough and objective investigation to determine if someone belongs in a jail cell.”

White continued: “I am not releasing this information to hurt Marcellus Shale development in Pennsylvania, but to help ensure the reality matches the rhetoric. The Marcellus boom was built on the assumption that the DEP was competent and capable of balancing the positive impacts of the industry with its job of keeping residents safe and secure, but we now know that simply isn’t the case. Like most of us, I want the Marcellus Shale industry to succeed by doing things the right way, so it is crucial to find out what exactly the DEP was up to. If the system is indeed rigged, we must do everything in our power to root out corruption and restore public confidence in our ability to have an honest conversation with one another about developing a responsible energy policy for Pennsylvania.”

Due to the strong possibility of unlawful conduct, White is calling on the U.S. Attorney’s office, the Environmental Protection Agency, state Attorney General Linda Kelly and any other appropriate law enforcement agency to pursue an investigation of the DEP to discover the scope and depth of this scheme to withhold important information from Pennsylvanians. White is also sending a letter to the National Environmental Laboratory Accreditation Program (NJ-NELAP), to investigate whether the DEP’s conduct and practices violated the accreditation standards for the DEP laboratories. If accreditation standards were violated, White is requesting the DEP’s accreditation be stripped, rendering the agency unable to conduct and certify its own tests.

White said he is sending a letter to DEP Secretary Michael Krancer seeking a summary of how many constituents in his legislative district, which includes communities with high levels of Marcellus Shale drilling activity, had DEP tests done using Suite Codes 942, 943 or 946. White also intends to make a blanket request on behalf of his constituents that DEP release the full testing data directly to the individual property owners in question.

Any Pennsylvania resident who received water quality test results from the DEP should look for the number 942, 943 or 946 as a ‘Suite Code’ or ‘Standard Analysis.’ White encouraged anyone with questions to contact his district office at 724-746-3677 for more information and noted that the property owner should be entitled to the complete testing results from DEP.

“This isn’t a technicality, and it isn’t something which can be ignored,” White said. “We are talking about people’s health, safety and welfare. The sworn testimony from inside the DEP about a scheme to withhold vital information about potential water contamination is truly alarming. An investigation is necessary to answer these serious allegations.”