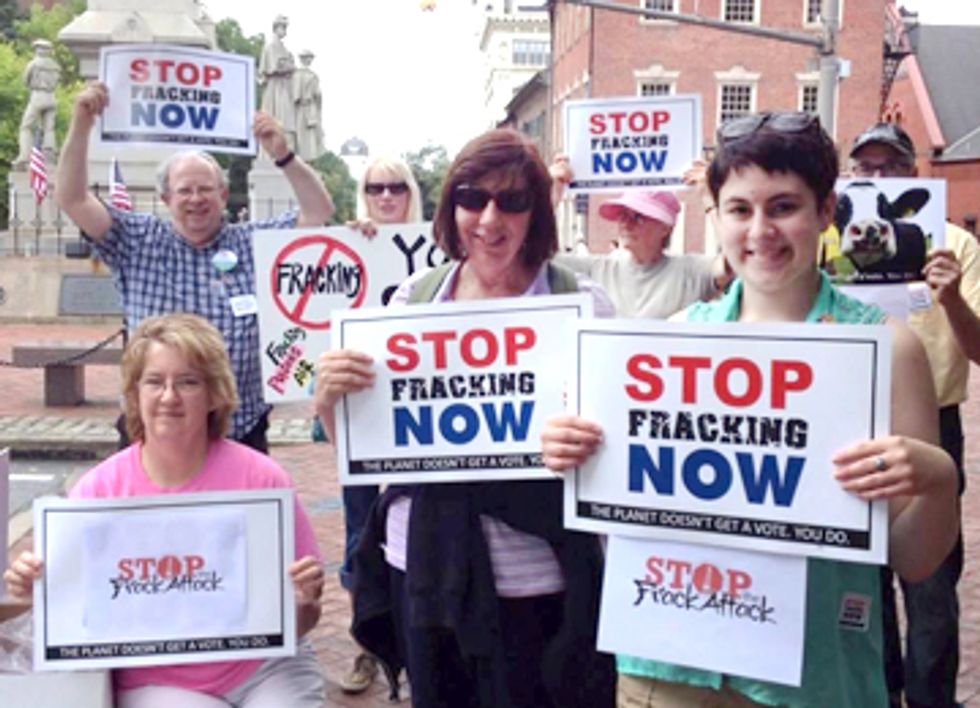 Since shale gas drilling began in Pennsylvania a decade ago, the PA Democratic Party has sought to tax and regulate drilling. That all changed on June 15 when the PA State Democratic Committee voted 115—81 to support a resolution calling for a moratorium on fracking.

The resolution, drafted by Susan Lyons, a member of the Monroe County delegation, calls for a moratorium until fracking can be proven safe. A version of the resolution offered at the committee’s last meeting was blocked from making it to the floor for a vote, so Berks Gas Truth, a grassroots community group, organized an action with co-sponsors Clean Water Action, Food & Water Watch, Gas Drilling Awareness Coalition, Lehigh Valley Gas Truth, Peach Bottom Concerned Citizens Group, Protecting Our Waters, Shale Justice and the United Sludge-Free Alliance to move the resolution forward.

“We really wanted the full committee to have an opportunity to weigh in on the resolution, but I don’t think any of us expected to get it passed this time,” said Karen Feridun, Berks Gas Truth's founder.

Members of Berks Gas Truth started planning to take action in May when they learned that the resolution would be up for consideration again in June. “We were discussing what we’d like to do for Stop the Frack Attack’s National Month of Action when our Patti Rose realized that the Dems meeting was being held mid-month. The timing was perfect,” said Feridun.

The group started by promoting the action online, inviting people to participate in conference calls where the plans were explained. The organizers encouraged registered Democrats to attend all of the sessions, meetings and social events, handing out buttons and literature. All others would protest in Lancaster’s Penn Square directly across from the Lancaster Convention Center.

“We provided people with the list of committee members and told them to start calling. We told registered Dems to be sure to ask to be proxies for those who planned to miss the meeting. Proxies can not only vote, they can speak from the floor,” explained Feridun who was herself a proxy, as was the Shale Justice Coalition’s Wendy Lynne Lee.

“People were lining up proxies. Some even changed parties just to attend the meetings. Several people I spoke with were learning for the first time that there’s such a thing as a state Democratic committee out there to lobby,” says Feridun.

The committee’s 59 percent to 41 percent vote mirrors the results of a recent poll by the Center for Local, State and Urban Policy at the University of Michigan, in conjunction with the Muhlenberg College Institute of Public Opinion in which nearly two-thirds of Pennsylvanians supported a moratorium on fracking. Two weeks earlier, environmental organizations led by PennEnvironment delivered 100,000 petition signatures calling for a moratorium to Gov. Corbett (R-PA). Sen. Ferlo (D-PA) announced that day that he is introducing a moratorium bill. Five Democratic legislators have signed on so far.

Most who spoke from the floor prior to the vote spoke in favor of the resolution. Rosie Skomitz, a member of the Berks Delegation and an active member of Berks Gas Truth, challenged the party to take a firm stand against fracking and pointed out that a Democratic senator was introducing a moratorium bill that had already picked up five Democratic co-sponsors.

One of the members to express her opposition was Vice-Chair Penny Gerber who said, “This bill (sic) as it currently stands says it is a moratorium on hydraulic fracturing, but it specifies that the moratorium will last until the practice can be done safely. Because no set period of time is provided it truly is a ban on fracking, and this is a thriving industry. It is for that reason I cannot support this bill (sic).” Incidentally, Gerber works as an associate for Ceisler Media & Advocacy whose clients include Chesapeake Energy, Reliant Energy and Spectra Energy.

“When I heard Gerber make the point that a moratorium until fracking can be done safely is in effect a ban, I thought, ‘Right! That’s our point exactly! It can never be proven safe!’” said Feridun