Oxford Alum Says, I Will 'Hand Back my Degree' If University Does Not Divest From Fossil Fuels 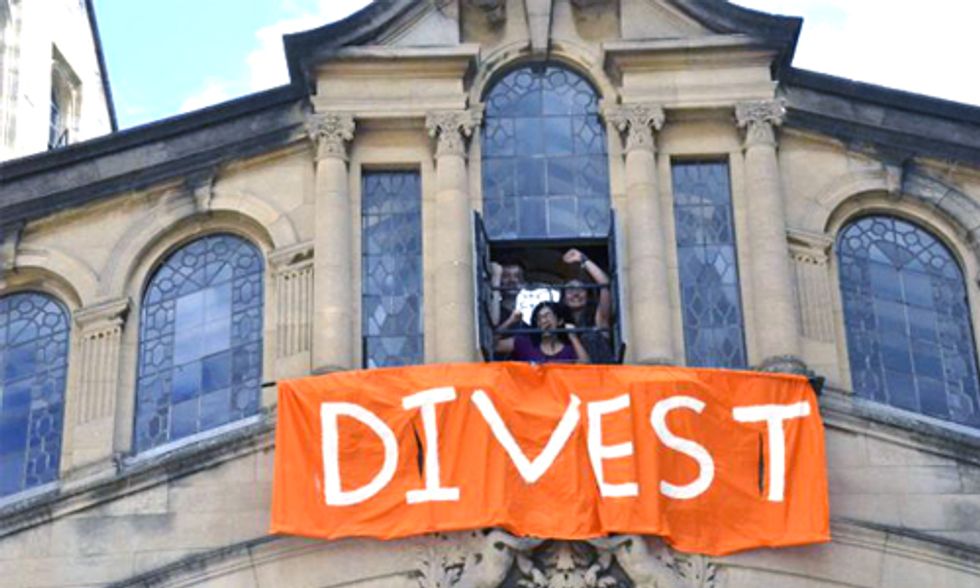 England's Oxford University became the latest school to take up the issue of divesting its endowment, worth $3.9 billion, from fossil fuels. Its university council met this morning to discuss it and decided—to do nothing. To the outrage of many student and alumni activists, it deferred any decision to a future meeting.

Oxford alumni occupy a building at the school, furious that the administration decided to punt of divesting its endowment from fossil fuels. Photo Credit: Oxford Fossil Free

“Last October’s Oxford University Student Union (OUSU) resolution has raised an important and multi-faceted matter which requires thorough consideration," said the administration's statement. "The university council had a good discussion of the issues and agreed to consider the matter further at a future meeting.”

"We are disappointed that they have deferred this important decision until a future meeting," they said in a statement. "This deferral represents serious complacency towards the urgent need for action on climate change. The Oxford University Divestment Campaign has been active for over 18 months, during which time it has been continuously hampered by the slow burn of the university’s bureaucratic processes. The absence of a response today is disappointing, given how long the decision-making process has taken already. We appreciate the university’s active engagement with the student body on this issue, and strongly urge the university to make the right decision without delay."

Others were less placated. Immediately after the university's announcement, Oxford Fossil Free posted on its Facebook page: "BREAKING: Oxford alumni have occupied a university administration building to demonstrate their anger over today's announcement that the university has deferred until May its decision on whether to divest from fossil fuels."

Also not placated was Oxford alumna Sunniva Taylor, who said, "If the university does not divest from fossil fuel extraction I have decided to hand back my degree, in protest. This is not just a question of integrity for me. I want to use the privilege having it gives me to try and shake things up; to use my power to draw attention to others’. The University of Oxford still has a lot influence—nationally and globally—and so the choices it makes about where it puts its money really do matter."

Another alumnus, solar energy entrepreneur Dr. Jeremy Leggett, said, "I don’t think universities should be training young people to craft a viable civilisation with one hand and bankroll its sabotage with the other."

Thousands of Oxford students and hundreds of alumni and academics have joined in encouraging the university o divest.. Photo Credit: Oxford Fossil Free

Oxford Fossil Free began in 2013 when the Oxford University Student Union Environment and Ethics Campaign took on fossil fuel divestment as its main project. By last November, more than 2,000, along with 300 alumni and 100 Oxford academics, had signed an open letter urging the university to divest. Currently the campaign boasts more than 550 alumni who have pledged not to donate to the university until it divests.

The campaigners were encouraged when the university council decided to have today's discussion, and last week, Oxford Fossil Free hosted a teach-in called "5 Days to Divest" to raise awareness of the issue and put some pressure on the administration, hoping it would follow in the footsteps of Scotland's Glasgow University, the first UK school to divest last October. Around 200 institutions globally have made commitments to pull their investments from fossil fuels, including Stanford University and the New School in New York City.

"We call on supporters of the campaign to continue to lobby the University, and show their support for responsible investment," said Oxford Fossil Free today. "The university must also know that our campaign will only grow from here; we will continue to make our demands, now with renewed urgency and determination."

The pressure will also continue from the Oxford University Student Union, which has endorsed the campaign.

"University council has seriously considered the proposals and has decided it wants to get more information before making a final decision, most likely in May," noted student union president Louis Trup. "My colleagues and I who sit on university council will then be able to show that the significant student view and the undeniable scientific evidence must not be ignored.”