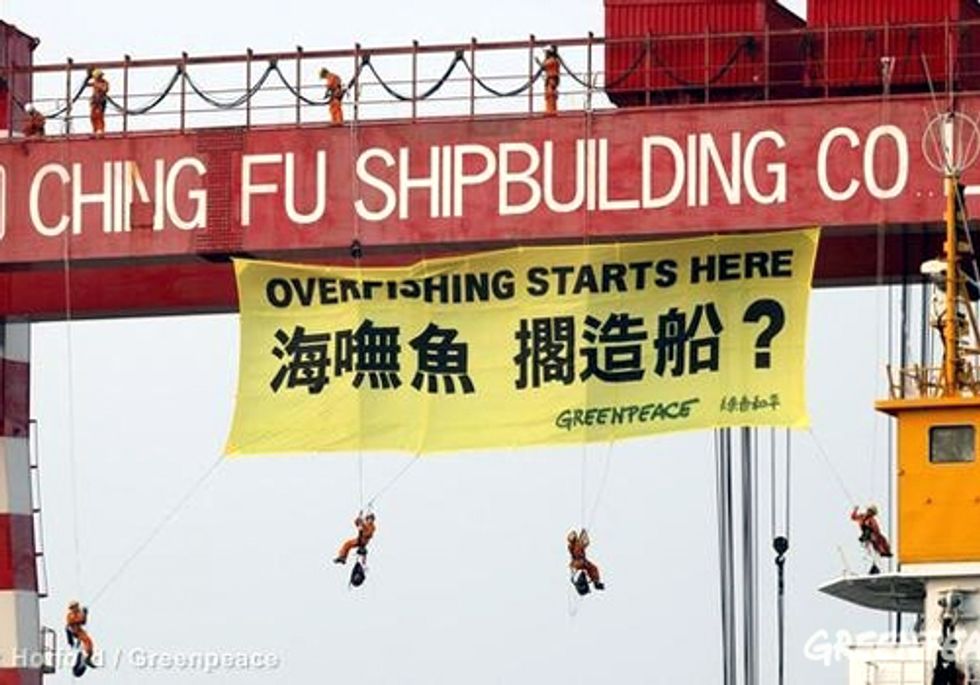 This morning in Taiwan—home to the world’s largest tuna fishing fleet—Greenpeace activists took action at the largest shipbuilding yard there. The activists unfurled a large banner saying “Overfishing Starts Here” at a facility where massive industrial fishing boats destined to fish across the globe's oceans are built.

Destructive overfishing has already put the future of our oceans—and the billions of people dependent on them for food and jobs—at risk. The bottom line is simple: future generations need fewer huge fishing boats and more fish.

That’s why our activists in Taiwan took action today: the Taiwanese government has been side-stepping international agreements and sending fishing vessels to the corners of the planet, determined to catch the very last fish.

While the Taiwanese fishing barons profit now, the people of Taiwan and the artisanal fishing communities will pay the price for the industrial fleets fishing themselves out of existence.

Having completed patrols of the southwestern Indian Ocean, the Greenpeace flagship arrived in Port Louis, where it will host public events over the next few days. The campaign team on board will also be meeting with industry and government officials to discuss ways to end overfishing.

Port Louis is a major hub port for the region’s tuna fishing fleet and the talks to be held in coming days will focus on the action needed from governments and industry to ensure legal, sustainable and equitable tuna fisheries—crucial for the creation of fishing jobs.

Greenpeace's expedition into the Indian Ocean—the world’s second largest tuna fishery, behind only the Pacific—is highlighting the problems of illegal fishing and the threat overfishing poses to the region’s people.

Today is a very exciting day. Our oceans campaign’s very first major confrontation with shipbuilding and our first visit to Port Louis to discuss overfishing.

Our work to defend our oceans for the future continues in Taiwan, Mauritius and elsewhere.

The solution here is you—by demanding your supermarkets carry sustainable tuna and urging your tuna brands to source their tuna from responsible fisheries, together we can leave our children a future of fish in the ocean, in nets and on plates.

Steve Smith is based in Greenpeace International's Amsterdam office.