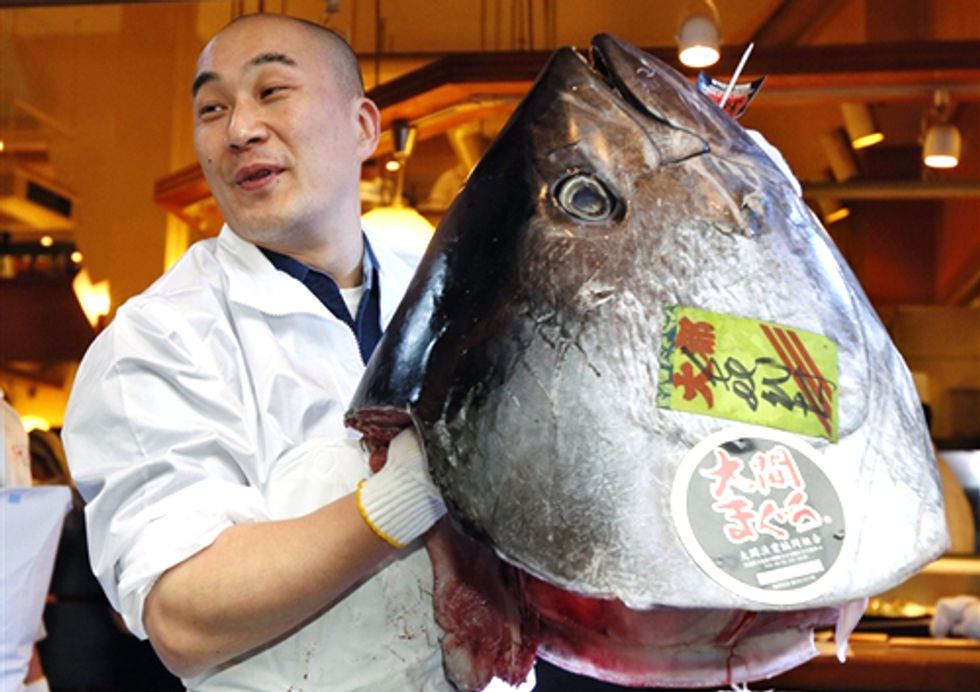 A chef shows the head of a 489-pound bluefin tuna sold for the record sum of 155.4 million yen (some $1.7 million) in the New Year's first auction at Tsukiji Market. The successful bid was about three times the record 56.49 million yen bid in last year's auction. Photo: Kimimasa Mayama / EPA

Just three days after a single Pacific bluefin tuna fetched a jaw-dropping $1.76 million at a fish auction in Tokyo, Japan, scientists released a new stock assessment for this species—and the findings are shocking. According to the report, the Pacific bluefin population has dropped 96.4 percent from unfished levels due to decades of overfishing.

“These new data show that the population of Pacific bluefin is a small fraction of what it used to be, and is in danger of all but disappearing,” said Amanda Nickson, who directs global tuna conservation at the Pew Environment Group.

Slightly better management exists in the eastern Pacific. At its annual meeting last June, the body responsible for managing Pacific bluefin off the west coast of the Americas, adopted the first catch limits for this species. This conservation measure caused the fishery to close earlier than planned when the limit was exceeded in August. While those actions were encouraging, they are not nearly enough.

“The Pew Environment Group believes the most responsible course of action is to immediately suspend the fishery until significant steps are taken to reverse this decline,” said Nickson.

“This latest assessment shows just how bad the situation really is for this top predator,” said Nickson. “This highly valuable fish is being exploited at almost every stage of its life cycle, and more than 90 percent of Pacific bluefin caught are juveniles, taken before they have reproduced. Further, fishing continues on the spawning grounds of this heavily overfished species.”

Measures needed include science-based catch limits, and major reductions in the catches of juvenile bluefin by implementing size limits across the Pacific and preventing fishing on bluefin spawning grounds. Robust monitoring and enforcement measures must also be implemented to ensure that the rules are followed.