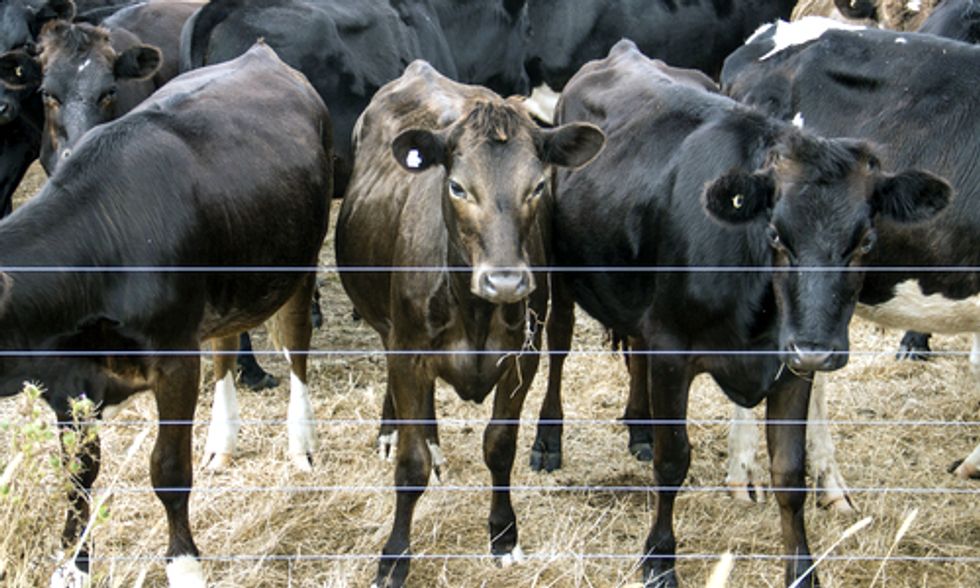 Due to California's historic drought, a variance was issued by the U.S. Department of Agriculture (USDA) in February that enables applicable organic livestock farmers in the Golden State to temporarily disregard the feeding standards that allow them to stamp their product as organic.

Organic producers are only allowed to substitute their livestock's grass diet with organic feed, but there is concern that this is not a long-term solution as it threatens established organic standards. Photo courtesy of Shutterstock

Farmers, whose grazing season include February and March, are not required to have their livestock grass-fed during those months given the absence of grass. Essentially, scores of cows will graze for only two months instead of four, which is the amount of time typically required to label livestock as organic.

During that time, “organic ruminant livestock producers … are not required to graze or provide dry matter intake from pasture during this time period,” the variance states. “Producers may reduce their 2014 grazing season by the number of days that correspond to this time period in their grazing plan.”

The USDA variance was approved after the federal agency received several requests from the California Certified Organic Farmers and Marin Organic Certified Agriculture, and it will only apply to farmers operating within the 53 out of 58 counties that have been deemed primary natural disaster areas, according to the The Huffington Post

“It’s huge because we still don’t have pasture for cows to graze on,” Albert Straus of the Straus Family Creamery in Petaluma told The Guardian. “We lost at least a month to a month-and-a-half of pasture,” he said, adding that the grass died out last December.

President Obama recently visited California to provide a $183 million aid package, but Straus said the government funding (which has topped $1.2 billion overall) will do little to fix the widespread problem. “As far as I know it’s not fast enough or enough money to help the farmers,” he added. “I don’t think it will touch the losses that farmers will have."

According to the California Certified Organic Farmers, organic producers are only allowed to substitute their livestock's grass diet with organic feed, but there is concern that this is not a long-term solution as it threatens established organic standards.

“It’s a necessary evil,” Ronnie Cummins, national director of the Organic Consumers Association, told The Huffington Post. “We’ll support this variance if that’s the only alternative."

“Grass-fed dairy or beef has higher levels of Omega-3 and Omega-6, which is extremely important in human health,” said Cummins. “There’s no doubt that feeding grain to animals that aren’t supposed to be eating grain is not good for them, not good for the environment and not good for consumers."

According to the USDA, the variance is temporary, but the timeline could be extended if the drought continues to devastate California's farming communities.

In January, after the state of California formally declared a drought emergency, Juliet Christian-Smith, climate scientist at the Union of Concerned Scientists, explained, “The current historically dry weather is a bellwether of what is to come in California, with increasing periods of drought expected with climate change.”

The record breaking drought has taken a tremendous toll on the state of California. Below is a stunning photo essay compiled by Earthjustice,