Organic Labeling: What You Need to Know 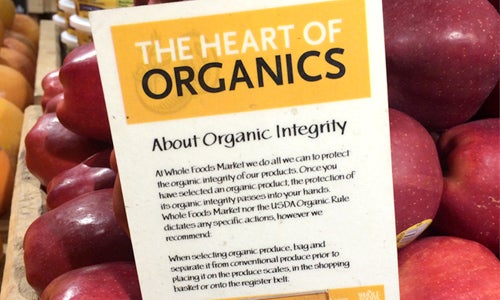 Emma Loewe is a senior at Duke University where she studies Environmental Science, English and Visual Media. She loves being outside, taking pictures and finding creative ways to write about sustainability.

It’s 2 p.m. in Whole Foods. Organic D’anjou pears from Washington beckon you into the produce section where a variable bounty awaits. Organic white onions sit unblemished despite their recent journey from the California croplands, whole trade Mexican bell peppers bask in their vibrant hues and hefty slices of New York strip steak gather around a “no cages, no crates, no crowding” label. 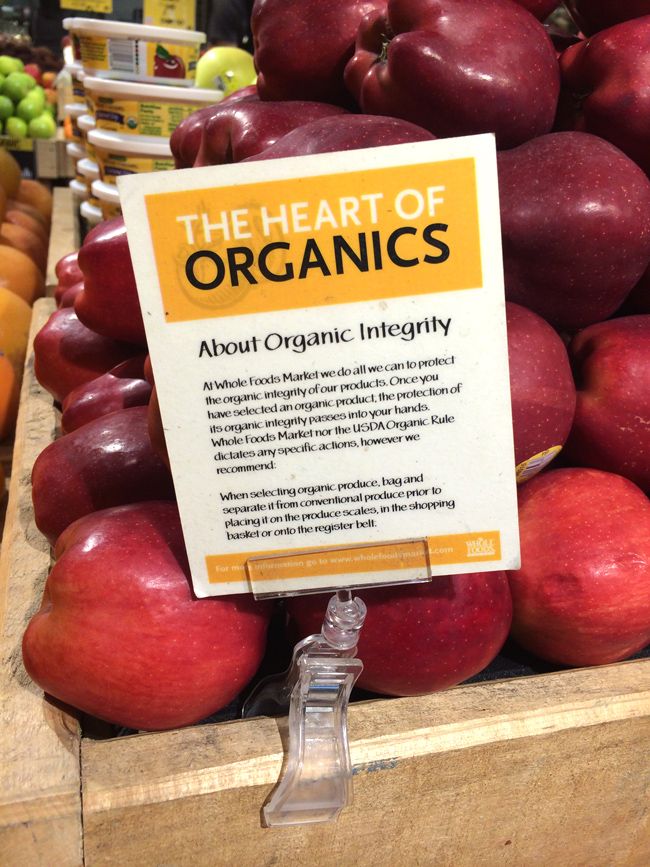 But what does it all mean?

More people are opting to go green than ever before and grocery stores are shifting to meet demand. Nearly three-quarters of U.S. supermarkets are now stocked with organic products. With humble beginnings rooted in the environmental movement of the 1970s, the organic market has expanded to conjure images of green pastures and smiling cows in the minds of shoppers nationwide. However, this imagined ideal does not always pan out.

The organic market is policed by the National Organic Standards Board (NOSB), an advisory committee composed of farmers, conservationists, consumer reps, processors, scientists and retailers. While some of the 15 constituent members are small-scale organic farmers by trade, others represent more industrialized interests. Carmela Beck, a NOSB farmer, is a program manager at Discolls. Tom Chapman, a handler, earns his living sourcing ingredients for Clif Bar. These members illustrate the notion that the organic market, like the conventional agriculture market, is ultimately a business. It has increased its supply in order to meet the demand of a booming market—taking on some characteristics more inherent to large-scale farming in the process.

Every five years, the NOSB revisits its list of synthetic substances that may be used in organic production and handling. These ingredients often serve to increase shelf life or product yield. The current list includes some chemical compounds—your ethanols, isporopanols and sodium hyplochlorates, in addition to some more baffling additives—liquid fish products and humic acids to name a few. I set out to Whole Foods (the very chain where, coincidentally, a previous NOSB member works as a quality standards coordinator) to look a little closer at its labels.

Over the course of my search, I came across organic trail mix that featured Silicon Dioxide, Cirtric Acids and Maltodextrin. Try saying that five times fast. The canned goods aisle brought me to organic soup made up of sodium citrate and a dash of “cheese flavor” for good measure. The organic cereal I picked up was made with vegetable glycerin—a common additive in cosmetics and soaps because of its cooling effect on the skin. Green pastures and smiling cows be dammed.

The labels on these organic products are often as varied as their ingredient lists. The label that carries the most weight as far as organics go is the one that reads “USDA Certified 100% Organic.” Foods that bear this label are made up of only organic ingredients and those synthetics that the standards board deems safe. The next step down is the “Certified Organic” label, which requires that at least 95 percent of a product’s ingredients are organic. This is followed by the “Made with Organic Ingredients” seal, which says that at least 70 percent of a food’s components are organic. Pair these markers with the 19 other third-party organic labels that exist outside of the U.S. Department of Agriculture (USDA) system and you end up with grocery shelves overflowing with sustainable claims. Many of the packages I saw in Whole Foods also advertised “all natural,” “premium quality” and “sustainably sourced” ingredients next to their various organic seals. Though the USDA has a regulatory team to monitor national product packaging, its scope is limited and most of these promises go unchecked and unsubstantiated.

You don’t need to look beyond your local grocery’s shelves to realize that the organic food market is defined in its complexities.

Spirulina: One of World’s Healthiest Superfoods